The Fate of the Bison 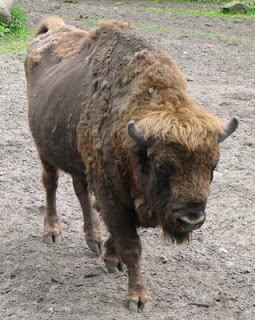 Before Europeans arrived, vast herds of bison inhabited the Great Plains of America, ranging from Manitoba to Mexico and Pennsylvania. The story of their decline due to massive overhunting is a dramatic one that seems to be well-known in America, an object lesson in mankind's ability to damage nature. Today, around 30,000 American bison (Bison bison) survive in the wild, and those raised in captivity are often hybrids with domestic cattle, rather than genetically pure survivors of the original species. American bison are officially considered "Near Threatened", and it is only the ongoing conservation efforts that prevent them from being a truly threatened species.

If you think that's bad, the story of what Europeans did to the bison of their own continent is even more depressing.

The European bison (Bison bonasus) looks very similar to its American cousin, but is, nonetheless, a distinct species. It's somewhat slimmer than the American species (which admittedly isn't saying much - they're both very muscular), and the horns are a different shape, but that's pretty much it. To avoid confusion between the two, the European bison is sometimes called by its German name of "wisent", but I'll stick with the more common English name.

While we're on the subject of names, though, it's worthwhile mentioning the difference between bison and buffalo. In America, the two words mean the same thing; they're both referring to the American bison. In Europe, however, the term "buffalo" is reserved for a number of African and Asian species, such as the water buffalo, which are clearly cattle, but look quite different from bison.


One other species of "true" cattle (that is, as opposed to other members of the cattle family, such as sheep, goats, and antelope) probably also exists. This is the saola (Pseudoryx nghetinhensis), an animal so rare that it was only discovered, hiding in the jungles of Vietnam, in 1993. It doesn't look very cow-like, and so probably branched off from its relatives even before the buffalo, but the first genetic analysis was only conducted last year, so I have left it off the diagram. The auroch, ancestor of modern domestic cattle is, of course, extinct as a wild animal.

Once, herds of European bison ranged across most of central Europe, much as their American counterparts did across the Atlantic. They did not sweep across wide grassy plains, because Europe doesn't have many of those, and instead preferred woodland environments, much as the American bison in Canada do today. There were three subspecies, one on the south-eastern edges of Europe in the Caucasus mountains, one further west in the Carpathian mountains, and the other more widespread across the lowlands.

While the American bison did not begin to die out until the nineteenth century, the European species began to suffer much earlier, partly due to hunting, and partly due to the loss of their woodland habitat to encroaching agriculture. As early as the Middle Ages, only scattered populations remained, and the situation only got worse as human population soared. By the nineteenth century, the Carpathian subspecies was extinct, and only two populations of European bison survived: one in the Caucasus, and the other in a carefully managed royal hunting reserve in the Białowieża Forest in Poland.

In 1914, World War One began to sweep across Europe, and by 1919, the last lowland bison in Poland had been eaten by the German army. The Caucasian subspecies struggled on only for a few more years before, it, too, went extinct in 1927. Except... the lowland bison, at least, were not quite extinct. There were still animals in zoos - only a tiny number, to be sure, but that might just be enough to save them.

Of these captive animals, five bulls and seven cows successfully bred, and all European bison alive today are descendants of these twelve animals. In 1952, a group of forty purebred lowland bison were released into the wild, back in the Białowieża Forest. The herd prospered, and today, there are nearly 2,000 lowland bison in existence. Over half of them still live in the same forest, with the remainder scattered across Poland, Belarus, and Lithuania.

These animals are, however, remarkably inbred. They are descended from just seven of the founding twelve animals, and the male lines of all but one of the bulls have since died out - meaning that all living bulls have an essentially identical Y-chromosome. In domestic cattle, its considered unwise for animals to be more than 12.5% inbred, or they will begin to lose fertility, die young, and generally perform poorly. In the lowland bison, inbreeding has been estimated to approach 50%, although there don't seem to be any major problems. There are a number of possible reasons for this, but it could just be that we haven't noticed yet, what with most of the animals being out in the wild. On the other hand, they have suffered from a recent outbreak of balanitis, although this doesn't appear to be connected with inbreeding.

But what of the Caucasian bison? It turns out that one bull of the founding five, appropriately named "Kaukasus" by his keepers, belonged to this subspecies, not the lowland one. He died in 1925, just two years before the last living member of his subspecies out in the wild, but he had managed to sire a number of calves. As the only animal of his kind in captivity, the only cows he could mate with were lowland bison, and so all of his calves were hybrids, and the Caucasian subspecies is therefore officially extinct. But his calves did survive, and they went on to breed with other lowland bison.

Because of this, the hybrid descendants of this solitary Caucasian bison are also descended (through the female line) from all eleven of the other breeding bison alive in the 1920s, and are much more genetically diverse than their purebred kin. Indeed, the hybrids are about 94% lowland, with only 6% of their genes coming from Kaukasus himself. There are estimated to be slightly more of these hybrids alive today than there are purebred lowland bison, although about half of them live in captive breeding centres. Nonetheless, some have been released into the wild in Poland, Slovakia, Russia, and Ukraine. They have even recolonised the Carpathians, former home of the long lost third subspecies.

Inbreeding among these hybrids is estimated at around 26%, just marginally worse than the 25% you would get if a brother and sister had children, but not as bad as in the purebred lowland bison. Even so, they seem to be worse off, although that may just be because so many of them are in breeding centres where such things are more obvious to researchers. For instance, the hybrids seem to suffer from abnormalities of the skull, and an increased chance of dying within a month of birth.

Because the total population of European bison is increasing - albeit from an incredibly low starting point - as of 2008, it is no longer considered an Endangered species. It is however, classified as Vulnerable, which is only one grade higher, and makes its position worse than that of the American bison. As you might expect from a species down to just twelve animals less than a hundred years ago, it is extremely inbred, and its continued survival is by no means assured. The effort that has been put into saving the European bison over the last century has reaped great dividends, but the task is far from over.