Surviving on the Edge 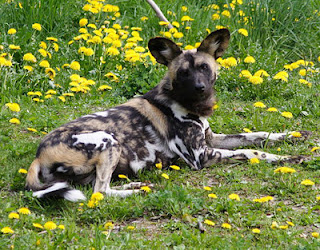 The spread of humanity across the globe has been bad news for a number of animal species. Species have always gone extinct, as the climate or other circumstances change, but the pace of extinction, and the number of species that are currently teetering on the brink has greatly increased over the last few thousand years. In many cases, humans are the direct cause of the problem: we kill animals for food, for sport, for make-believe medicines, to protect our livestock or crops, and so on.

But just as often the effects are indirect, as natural habitats are broken up into smaller isolated pockets or destroyed altogether. A few species have adapted well to human environments, and are rarely, if ever, found far from our settlements - the house mouse and the pigeon are both examples, before we even begin to look at pets or livestock. But most have not fared so well, and the question of how our destruction of the habitat affects animals is obviously an important one in conservation.

The African wild dog (Lycaon pictus) is one of about five endangered species in the dog family (I say "about", because it depends what you count as a species). Once, they used to range across most of southern and central Africa, avoiding only the densest jungles and driest deserts. Now, they are essentially gone from west Africa, and found in only scattered populations in the central and eastern parts of the continent. Human activity, as one might expect, is often given as the main reason for this decline. The dogs themselves aren't valued for their meat or body parts, although they are hunted to stop them eating livestock, but more serious threats are thought to come from the gradual destruction of their habitat to make way for farms or ranches. In their case, there is also an additional effect in that diseases harboured by local populations of domestic dogs may also be transferred to the wild animals.

Still, a number of other reasons have been put forward to explain the decline of the African wild dogs, although its likely these are simply making the problem worse, rather than being the main cause of it. Larger local predators, such as lions and hyenas out-compete the wild dogs and keep their numbers down. Normally, that might not be a great problem, and presumably it has continued that way for many thousands of years. But the resulting low population densities for the wild dogs put them at risk of the Allee Effect - a catastrophic downward spiral of population decline in which low numbers of animals make it difficult to find mates, which leads to less young being born, which leads to lower numbers of animals, and so on.

The problem with the Allee Effect is that, once populations start declining below a particular level, it becomes very difficult to restore them, and things only get worse. It can take just one sudden problem - an outbreak of disease, say - to push the population over the edge, and on an irreversible path to local extinction. It has been suggested that the unusual habits of African wild dogs may make them especially vulnerable to this effect. African wild dogs belong to the branch of the dog family that includes wolves, coyotes, and other such familiar animals, but they branched away from the more 'typical' members of that group fairly early on in their evolutionary history.

Note that the group marked 'wolves, etc.' actually includes the golden jackal, as well as wolves, coyotes, and domestic dogs. From a scientific perspective, it should probably be called the 'golden wolf' or some such name... but it isn't.

This long evolutionary separation from their kin has resulted in some changes to their habits and biology, and its worth noting that wolves, for example, are not endangered over most of their range, even though they are hardly common in western Europe. Like wolves, African wild dogs are pack animals, but the way their packs form is quite different. In most social mammals, females stay with their mothers to form the nucleus of a herd or pack, while adult males wander way from home, and eventually find a new pack, where the strongest alpha male comes to dominate reproduction with the females. In African wild dogs its the other way round; the females are the ones that leave home, and there's usually only a single alpha female that does the breeding. This results in a situation where the reproducing female relies on the rest of the pack to help raise her young, and it has been suggested that, if the pack isn't large enough, that will produce a knock-on effect that makes raising new offspring even more difficult.

To try and tease apart the various factors that endanger African wild dogs, Rosie Woodroffe of the Institute of Zoology in London studied how a population of the animals re-colonised a savannah habitat in northern Kenya between 2000 and 2008. The area is divided between modern ranches, which are relatively large, open affairs, where the dogs are more likely to compete with lions and hyenas than with humans, and a series of smaller communal lands inhabited by the local Samburu and Masai tribes, where the reverse should be the case. How would the animals fare?

For once, its good news. Over the years, the population of wild dogs rose by a factor of about five, successfully recolonising the semi-wild landscape. An outbreak of disease in 2006 caused a temporary setback, but by then the population had risen enough to weather the storm, and, while three packs were wiped out, others moved in to take up the space. This sort of rapid rise in population is actually quite similar to that seen in wolves, and may suggest that the two species are not so different after all, given the right circumstances.

As predicted, smaller packs were able to raise less young than the large ones, supporting the idea that the dogs rely heavily on cooperation in the rearing of their pups. This would suggest that problems could arise where suitable land is scarce or fragmented, but it obviously wasn't here, and the increasing number of new packs as the population rose apparently compensated for any loss due to the individual packs being smaller.

Nor did it make any difference whether the dogs lived around the ranches or the tribal areas; both populations did equally well. This suggests that, to the extent that they had any effect, increased number of humans was no worse for the dogs than the increased number of lions and hyenas in areas the humans avoided. This, Woodroffe proposes, is all down to the way that the locals managed their land. They weren't hunting very much, which meant that there were plenty of dikdik and impalas around for the dogs to eat, without them having to venture directly onto the farms. The farmers were good at keeping their livestock under control, and close to home, leaving plenty of well-connected patches of wild land, and allowing the dogs to simply avoid the densely settled areas, where they would be at risk.

In a similar study on French pine martens (Martes martes) published in the same month, Marina Mergey and colleagues found that they, too, were less affected than expected by the encroachment of human agriculture, despite the fact that, in their case, their forest habitat was clearly being fragmented. Perhaps the pine martens were able to find more voles to eat on the edges of agricultural land, helping to compensate for the loss of habitat, although it was worrying that less adults were found in such terrain - whether because they'd died, or because older individuals pushed out the younger ones from the deep forest, forcing them towards the farmland, is unclear.

All of which suggests that, for at least some animals, conservation strategies can work without causing real problems for human lifestyle. It is possible to live alongside wild animals without necessarily coming into conflict, providing you do it right. That's not always easy, and it doesn't help those rare animals actively hunted for their body parts, but it is possible, and that, at least, ought to be encouraging.