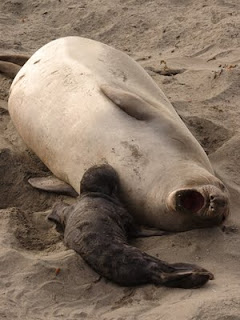 Oddities such as the brown antechinus aside, unless they die young, most female mammals can expect to give birth to several litters over their lifetime. This is a useful strategy, ensuring that you don't put all your eggs in one basket, so to speak. However, as human mothers may have noticed, looking after young can be a stressful and exhausting task, especially in species where the male can't be bothered to help out (which is most of them). As a result, in the wild, raising a litter of young is not always as successful as it might be, and, at times, the mother doesn't even survive the experience.

In general, it seems that mothers raising their first litter of young are the least likely to manage; those who have done it at least once before cope much better. That might not sound very surprising, but consider that there at least three different reasons why this might be the case. Perhaps the most obvious is that they just aren't very good at it the first time round. That may be partly due to a lack of experience, but raising young is fairly instinctive for most species, so it could also be that older mothers are larger, and better able to survive the experience of diverting some of their food resources to their offspring.

But another possibility is that the mothers might be deliberately not doing such a good job the first time round. This explanation, which I also discussed for the brown antechinus, is "terminal selection theory". The idea is that it's sometimes better for the mother to lose a litter and live to breed again than it is for her to die raising the first one. As she gets older, the less likely she will have another litter anyway, and the less she has to lose by putting all of her effort into raising the current one (assuming that is, that your primary objective is to have as many healthy young as possible, which in evolutionary terms, it usually is). So, if you don't completely wear yourself out on the first litter, maybe they'll survive anyway, but, even if they don't, at least you'll get to grow bigger and raise more young in the future.

The third possibility is that some mothers are better than others. If the 'bad' mothers are going to die trying to raise young, its far more likely to happen on their first attempt. If this theory is right, the only reason that older mothers do a better job of raising young is that they've proven they're good at it - all the bad mothers are already dead. They survive to raise more young, not because they were lucky, but because they have some advantage that continues to stand them in good stead as they age. Finally, of course, we should acknowledge that there's no reason why there can't be some truth in all three of these options, or that some might be more important for some species than others.


The northern elephant seal (Mirounga angustirostris) is one of the largest of all seals, with the adult males reaching over two tons in weight. They breed along the coast of California, spending the rest of the year offshore and travelling at least as far as southern Alaska. They belong to the true seal family, which is to say that they don't have visible ears or the ability to waddle about on land as fur seals and sea lions do; their hind legs are so well adapted to swimming that they can't be used for much else, and they have to drag their bodies with their front flippers when out of the water. Their closest relatives all live in Antarctic waters, from which the ancestors of the northern elephant seals probably headed north about three million years ago.

Interestingly, monk seals today are found in only two locations - the Mediterranean and Hawaii, which aren't exactly noted for being close to each other. Since seals as a whole seem to have originated in the North Atlantic, the Hawaiian ones must have travelled west by swimming in between North and South America, before they collided. Indeed, fossil monk seals have been discovered in the Caribbean, which would support this idea. For that matter, this is probably also the route that the Antarctic seals themselves took, much earlier, since we know of fossils of them from the Pacific, but not from the South Atlantic.


In a recently published study, Derek Lee of Dartmouth College in New Hampshire, looked backed over twenty years of records of northern elephant seals breeding at the Farallon Islands near San Francisco. There are a number of reasons why first-time elephant seal mothers might find it harder to raise their young than their more experienced relatives. Seals have to come ashore to give birth, but the rest of the time they are at sea. Since mating also occurs on land, it makes sense for it to happen at the same time, so they courtship takes place as soon as the previous litter are weaned, if not before. The rookeries where they breed become raucous and violent places with enormous males charging about all over the place, so the females can't afford to leave their young alone, which, since the males certainly aren't going to help, means they have to starve themselves for all the time that the pups are growing up.

This makes the life of a female elephant seal a pretty tough one, at least once they reach sexual maturity at three or four years of age. They spend eight months of the year pregnant, another two months raising a pup, and then two months stuffing themselves with food to make up for all the weight they have lost during their enforced crash diet. First time mothers, being smaller than their older relatives, would be expected to have a harder time surviving that catastrophic weight loss, and maybe also defending their patch of land and protecting their pup against aggression.

Its unsurprising, then, that first time mothers do not do as well than more experienced ones. They are less likely to raise their young to the point that they can be weaned and go off to live on their own, and also less likely to survive the experience long enough to return the following year. Not that this stops them trying; the study found that they were just as likely to mate after giving birth as experienced mothers.

Notice that, if this study is correct, it does rule out the possibility that this population of elephant seals, at least, are purposely expending less effort in looking after their first pup to increase their odds of raising a second or a third later on. If that were the case, while first time mothers would be less effective at raising young, they would be at least as likely to survive to breed again as experienced ones, and they weren't. So if they are trying to maximise their own survival at the expense of their pups, it clearly isn't working.

Its tougher to decide between the other two possibilities. Do experienced mothers do better and live longer because they got lucky the first time round, or because they have always been more skilled or fit than those which died? By examining the statistics, the study concluded that it was fitness as a mother, not sheer luck, that made most of the difference. Apparently, there is a Darwinian cull of unfit mothers, ensuring that only the best get to raise multiple pups in their lifetime.

The study doesn't end there, though, because it also looked at the effects of El Niño over the twenty year period. The main fish that northern elephant seals eat are Pacific hake, and, when El Niño brings its periodic warming of the eastern Pacific waters, the hake do less well, and the elephant seals suffer. Of course, hake aren't the only thing they eat; they are quite happy to consume squid, and even some small sharks and rays, but it is clear that the elephant seals do not put on so much weight in years when El Niño strikes.

We might expect that first-time mothers would do worst, especially if their smaller size is a handicap for them, but the study seemed to show that they did no better or worse than experienced mothers during warm weather. Which isn't to say that climate change, with increasingly warm waters and reduced numbers of tasty hake, doesn't affect elephant seals, just that it affects all of them equally, and that there are some things that being a good mother just can't help you with.

So, if you're an elephant seal, and you want to live long enough to have a second child, and more after that, you don't have to rely on luck, and you don't have to callously withhold all your energy from your first-born. Thanks to Darwin, you just have to be a good mother.