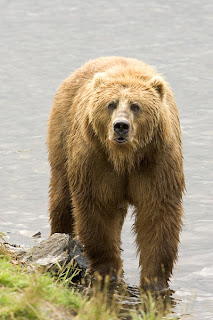 For most humans, the dominant sense is that of vision. Although the other senses are important, vision is particularly important to us, and it is generally well-developed in other primates, too, perhaps because most of them spend a lot of their time swinging through trees, where a good idea of the location of nearby branches is definitely helpful. But, for most mammals, the sense of smell is much better developed than it is in us, and far more important to the way they interpret the world.

One of the many ways that they make use of this is through scent marking. Apart from those that spend most of their lives in the water, the great majority of mammals scent mark in some way, and humans are a bit of an oddity in this respect. To assist them in scent marking, many mammals possess special glands producing smelly secretions that they can place on prominent landmarks, or in other locations that fellow members of their species might come across. And, of course, any cat or dog owner is familiar with the concept of using urine as a mark - the urine contains unique chemicals that can provide far more information to the animals concerned than it does to us.

The actual purpose of scent marking varies depending on the nature of the animal, and, particularly, its lifestyle and habits. For many animals, it can be used to stake out patches of territory, or to advertise sexual receptivity, for example, and that will depend both on how the animal claims territory, and on the details of their mating habits, such as how promiscuous they might be.

Along with polar bears, brown bears (Ursus arctos) are amongst the largest of all carnivorans. Like many carnivores - although unlike, say, wolves, lions, or otters - they are solitary animals as adults. Scent marking is therefore particularly useful for them, allowing them to record their presence and leave information for any other bears that may happen to wander through the same area. However, they are not particularly territorial. They do, like most other mammals, have a "home range" through which they habitually travel, but this regularly overlaps with those of other bears, of either sex, especially where food is abundant, and several bears live relatively close together.

Brown bears do, indeed, leave scent marks on prominent locations - mainly trees - within their territory. They do this by urinating, scratching and biting trees, and by rubbing themselves against them. Recent studies have confirmed that they have special anal sacs that produce secretions containing a wide range of odiferous chemicals, and that there is a subtle difference between the scents produced by males and females. We also know that pandas in zoos can indicate their sexual receptivity (such as it is) through scent marking, and that they can identify individuals by the same method. However, while we certainly know what the bears are doing, and its clear that they are leaving the scent marks to convey information to other bears, there have been few studies looking into exactly what they do with this knowledge.

A recently published study by Melanie Clapham of the University of Cumbria Centre for Wildlife Conservation, used camera traps to observe the behaviour of brown bears in the wild, evaluating how bears of different ages and sexes used scent marking. The area chosen for the study was Knight Inlet, in British Columbia, an area with a relatively high population of bears due to abundant rich forest and a river that regularly fills with spawning salmon.

Given that they aren't marking out their territories, perhaps the most obvious thing that bears would use scent marks for is advertising their willingness to mate. The breeding season for brown bears runs from late spring to summer, during which time males seek out local females and defend them from competing males, although they don't have any long-lasting monogamous bonds as seen in some other species, and the females can be quite promiscuous if they get the chance. As with most mammals, the female is not sexually fertile for the whole of the breeding season, but only when she is in heat, although that can last from 10 to 30 days. Clearly, this is useful information for the male to have, and its also useful for the females to know what males are in their neighbourhood.

If that were the only purpose of scent marking, we'd expect it to happen at only very limited times of the year, which it evidently doesn't. But, even if it's only one purpose, we would at least expect scent marking to be more common during the breeding season, and for one or both sexes to spend more time sniffing at scent marks during that season in search of the ursine equivalent of lonely hearts ads.

Except it turns out that they don't: adults of both sexes leave and investigate scent marks about as often outside of the breeding season as during it. That isn't to say that females don't advertise their availability somehow - presumably they do - and that method may even involve scent in some way, but there's at least no evidence here that they do it using their usual marking of trees.

On the other hand, subadults, old enough to leave home, but not yet sexually mature, do behave differently during the breeding season. Specifically, they scent mark less often at such times, but still investigate marks left by others just as often as always. That may be so that the older and larger males don't mistake them for possible rivals and beat them up. Perhaps its best for small bears who aren't yet interested in the opposite sex to keep their heads down during the breeding season, while still keeping an eye out for who else is around.

However, while there may not be much difference between seasons, there is between sexes: males scent mark a lot more than females do. The researchers conclude that, while the bears don't mark out exclusive territories, the larger males do want to demonstrate their own dominance and fitness, not to the females, but to each other. Male brown bears establish dominance hierarchies, where the strongest gets the first pick, not just of mates, but also of prime food such as river salmon. Advertising their presence and masculinity is therefore useful to them at all times of the year, helping reduce the need for constant fights, allowing the larger ones to lord it over the area without being pestered, and the smaller ones to avoid being being beaten up. Again, that's supported by the fact that, even outside of the breeding season, subadults, who have the most to fear, mark less than adult males.

But then, so do the females. Female brown bears are not so aggressive as the males. Although they are solitary animals, females tend to hang about in the same area, establishing a loose association of female relatives that show little rivalry amongst each other. They may want to advertise their presence to each other, and perhaps signal their relatedness, but they don't need to assert dominance in the way that the males do, so it's less of a big deal for them.

Another oddity was that, during the breeding season, females with cubs didn't appear to scent mark at all. Although there were some in the area, not once did they trigger a camera trap at the locations generally used for scent marking - effectively, they seem to have been hiding. Again, this may well be down to male aggression. That's because male bears are likely to kill the cubs of other males during the breeding season, because that will make the females more likely to mate again. That may be in the males' interest, but clearly not that of the females (or the cubs), so staying away from the obvious locations would make sense.

On the other hand, females with cubs were visible outside the breeding season, and they wouldn't be completely safe then, either. The authors speculate that this might be so that the mothers can teach their young about the area they live in, something that's especially important for their daughters, who will remain living there once they grow up. It might also give the cubs the chance to learn about the signals of others, and interpret the information in scent marks they have left. While staying hidden all year round might be the best way of protecting young, if you have to show them about at some point, it's best to do it at the time when the danger is at its least.