Weasels in the Tundra and the Jungle: Wolverines and Tayras 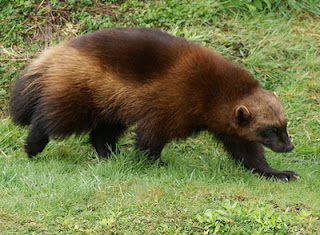 The largest terrestrial member of the weasel family is the wolverine (Gulo gulo). Indeed, by the standards of weasels, it's exceptionally large, around twice the weight of badgers, and about three feet long, not counting the tail. Within the weasel family, it belongs to the same evolutionary branch as the pine martens and their kin, and, size aside, that is apparent in its appearance.

Compared with martens, however, the wolverine is not only larger, but stockier, and much of its weight - three times that of the next largest marten-like animal, the fisher - is muscle. Indeed, they may well be the most physically powerful of all mammals in their size range. Other martens vary in the degree to which they live in the trees, but wolverines are the most terrestrial of them all, although they remain capable of climbing trees when the need arises. Compared with other marten-like animals, they have flat-soled feet, which are large and furry, making them ideal for running on snow. They also lack the pale 'bib' commonly seen on the throat of martens, although there is generally a band of paler fur running across their flanks to the base of the tail. Their fur is also exceptionally thick, which makes them look even larger than they are.


Wolverines inhabit the far north, from the mountains of Scandinavia and the lowland forests of Finland across northern Russia and throughout much of Siberia. At some point during the Ice Ages, they crossed the Beringia land-bridge, and entered the Americas, where they are today found in Alaska, northern Canada, and even down into the colder parts of the northwest USA. As recently as 1981, it was considered that American wolverines might constitute a separate species from their Eurasian kin, and you'll still see this in some online sources, but it's now generally accepted that they are only a subspecies, and that wolverines really are found all the way around the Arctic circle. Some additional subspecies have sometimes been identified, notably on Vancouver Island, but, while it is possible to distinguish them genetically, there is no general agreement that they are distinct enough for such a status.

During the winter, wolverines spend most of their time in snow-filled pine forests, but they often migrate north in the summer months, out onto the treeless tundra, or, if the terrain is suitably mountainous, upwards into alpine meadows above the tree-line. Many members of the weasel family are capable of catching prey larger than themselves, and the wolverine is no exception. For most weasels, that means eating things like rabbits, but wolverines are capable of taking down reindeer. That's rather more than they can eat in one sitting, and they have been reported to drag carcasses for some distance in order to find a safe place to stash them for eating later, whether among rocky shelter, or in the fork of a tree, Doubtless, the cold weather of their preferred habitat helps preserve the food for some time.

However, for all their supposed ferocity, wolverines attack animals like reindeer less than you might think. For one thing, they also eat smaller prey - marmots, lemmings, snowshoe hares, and beavers all feature in their diet. But, when they do eat deer, most of it isn't something they've killed themselves. That isn't to say that they won't attack and kill most herbivores of about the right size, because, given the chance, they will, but a lot of what they eat is actually carrion. Indeed, rather than take the trouble to dispatch their own reindeer, they have been reported to drive cougars and lynx away from their kills. In this way, they get to eat a lot of moose, something that's probably beyond even their formidable hunting skills.

Wolverines prefer to be nocturnal, but they live far enough north that isn't an option for much of the summer, when the nights are short to non-existent. Given their scavenging habits, and the fact that they live in a fairly barren environment, it's unsurprising that they travel considerable distances in search of food. They may travel 30 km (20 miles) or so each day, and males can easily range over 600 km2 (250 square miles) of territory, although females don't generally travel so far, and, of course, it does depend on the local landscape and the availability of suitable prey. It's unclear whether they put any effort into defending such a large territory from other wolverines of their own sex; maybe they do, maybe they don't, and maybe it just depends where they live. Either way, they certainly do mark their territory, using scent from their anal glands similar to those used by other martens. 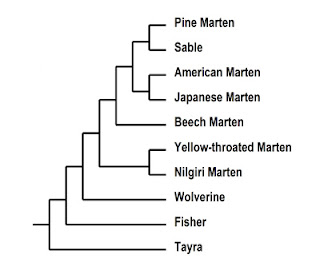 Whatever they think of potential rivals, however, they certainly don't mind members of the opposite sex. Since the male's home ranges are so large, that means that a number of females will live within their territory, and they probably mate with all of them. The breeding season lasts from late spring to early summer, but, like many other mustelids, the implantation of the embryo is delayed, so that the young aren't born for around nine months - far longer than you'd expect for an animal of their size. To prepare for the birth, the mother digs a tunnel through the snow, as much as three feet down, rather than the simple surface bedding den that she (and males) use for the rest of the year.

Litters of up to five young are born with a full coat of fur to insulate against the cold, although they are blind and helpless in other respects. They leave home in the autumn, often travelling hundreds of miles to get away from their parents and establish their own territory. They reach sexual maturity at two or three years of age, and females breed once every other year from then on. They have been reported to live for up to seventeen years in captivity, and, unusually, are among the few non-primates observed to suffer from something resembling Alzheimer's disease.

Despite their thick pelt, wolverines are less hunted for their fur than are many other mustelids. Wolverine pelts are used to make the lining for parkas, supposedly because they don't accumulate frost as much as other furs do, but they are less valuable than those of animals such as mink or sable. A greater threat perhaps comes from their reputation for gluttony and aggression. They will certainly attack domestic livestock, which may not be much of a problem in northern Canada and Alaska, but can be elsewhere, especially for reindeer herders in the north of Scandinavia. Furthermore, their habit of eating carrion means that they will take other animals successfully caught in fur traps, something that hardly endears them to the trappers. For both these reasons, they may be hunted simply to keep their numbers down.

As a result, the range of wolverines has decreased over historical time. They were once found as far south as northern Germany and Poland, and, in America, in places such as Pennsylvania, Indiana, and central California. In Scandinavia and eastern Canada they have mostly - though not entirely - disappeared, but, in recent years they seem to have rebounded in other parts of North America, and the species as a whole is no longer considered under threat, as it was in the 1990s. 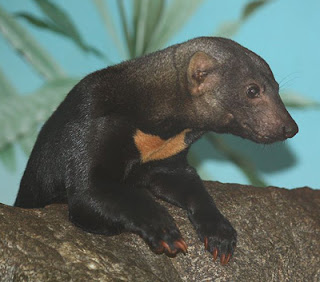 The wolverine aside, although some are more arboreal than others, martens are generally tree-living animals. They inhabit not only the deciduous and pine forests of the north, but also the much warmer forests of South-east Asia. They have never colonised Africa, but Central and South America are a different matter. Many of the forests there are inhabited by an animal called the tayra (Eira barbara). Its ancestors reached the Americas long before wolverines did, and possibly before those of the fisher, and they seem to have been developing in isolation for something like six million years, making them the earliest known branch in the marten evolutionary tree.

Perhaps because of that, tayras do look rather different from wolverines, fishers, and 'true' martens. Although they have a body about as long as that of a wolverine, they are much slimmer, and have proportionally the longest legs of any member of the weasel family (which, admittedly, isn't saying much). Given their warm native environment, their fur is shorter and coarser than that of most other martens, and their head is noticeably paler than their body; they often also have the yellowish throat 'bib' seen in so many marten species. However, there is considerable variation in their appearance, with some in Guyana even being a pale buff colour over much of their bodies.

They live in almost every kind of available forested habitat from central Mexico to the extreme north of Argentina, as well as on the island of Trinidad. They are agile animals, able to leap through the trees with the aid of their long, balancing tail, although they will happily cross grassland to move between two patches of forest. Their claws are said to be strong, and the soles of their feet are bare, both of which would presumably help with grip while climbing.

They mostly eat rodents, but opossums and lizards are also popular food, and they reportedly eat more fruit than any of their close relatives. One study even suggests that they pick unripe fruit, and store it somewhere until it ripens before eating it, although to what extent this really reflects forward planning is, perhaps, debatable. There are also reports of them attacking howler monkeys, albeit often with little success.

They are probably most active during the daytime, but seem to restrict themselves to the hours of darkness near human habitation, which rather confuses the issue. They also seem to be fairly sociable for mustelids, although quite how far this extends is unclear. Perhaps the jungle is rich enough in food that they don't need to worry too much about rivals, and can afford to tolerate each other's presence.

The tropical environment also leads to other differences between tayras and the temperate marten species. They breed throughout the year, having little need to pick a particular season. Similarly, they don't show delayed implantation, with a normal pregnancy starting immediately after mating, and lasting only a couple of months, rather than the much longer delayed pregnancies of other martens, which evolved to ensure births in the spring. Litters are generally small, with just two young being the most common. They are fully weaned at about 100 days, after which they abandon their birth den, often in a rotted log or similar cover, but they don't leave their mother for another three to seven months after that. For much of this time, the mother seems very solicitous of her young, often carrying them about, and fetching them wounded mice to practice their hunting techniques on, much as a cat might.

Since their fur is not valuable, they don't attack livestock beyond the occasional chicken, and they can inhabit a wide range of forest types, tayras are not considered a threatened species over much of their range, although the destruction of forest in parts of Mexico is causing them some local problems. They live for up to eighteen years, are quite playful, and can be tamed - apparently, some native Americans once used them to control rodents, although this does not appear to be the case any longer.

The wolverine and tayra bring us to the end of the marten-like animals, but we are still only a little over half way through the many species of the weasel family. In a few weeks, I will turn to the third major branch in that family, and take a look at the otters.

[Pictures by "snowmanradio" and LT Shears from Wikimedia Commons. Cladogram adapted from Koepfli et al. 2008]
Posted by JK Revell at 11:42