There are a great many species of mammal (and, indeed, other animals) that are endangered, or at least have their continued survival threatened to some extent. If we're at all interested in conservation, we obviously need to know which ones those are, and a good starting point is seeing how much their populations have declined recently. However, we need to do more than just that. We also need to why they're declining, how unusual such a decline is, and so on. Without that information, we'll have no idea how to fix the problem, or even whether the decline is anything much to worry about in the first place.

Long-term population studies are one way to achieve this. If we can look at a population of animals over the course of several generations, we can map declines and rises against the times that various events occurred, to see which are most important, and how easy it was for them to recover from temporary problems. If we study several species at the same time, we can also see whether some events that were good for one species were bad for another - a vital piece of information if we want to protect both of them.

For example, a recently published review paper examined the history of large mammals in the Ngorongoro Crater, Tanzania. This is the centrepiece of a conservation area immediately east of the Serengeti National Park, and a popular area for viewing the local wildlife. As you can see from it's Google Maps image, this is a roughly oval crater about seven miles across, and a very well-defined area, making it fairly easy to confirm that all the studies over the years are talking about the same physical location. The crater is the remains of a collapsed volcano (rather than, say, a meteor strike), with an unbroken rim of surrounding cliffs varying from 400-600 metres (1200 to 1800 feet) in height. In addition to making the boundary of the area fairly obvious, the cliffs also restrict the number of animals that come into or out of of the crater so that such things as annual migrations are less of an issue.

Looking at that image again, you can see that most of the crater floor is a dusty brown, which actually consists of dry grassland with the occasional bush or tree. There is, however, some forest (mostly acacia) on the eastern rim, while the two smaller green patches east of the lake are swampland. The lake itself is seasonal, only filling up when water collects in the bottom of the crater during the rainy season, and is rather salty and inhospitable.

Although we can safely assume that the local Masai people noticed it rather earlier, the crater was only "discovered" by Europeans in 1892, when it was visited by Austrian explorer Oscar Baumann. The area was, at the time, part of German East Africa, and it was only seven years later that a couple of German brothers established the first ranch in the crater. Not wanting them to interfere with their cattle, they did their best to drive all of the large native wildlife out of the crater, but, despite also killing thousands of wildebeest to turn into canned meat, they seem to have found the task quite beyond their limited resources.

The brothers abandoned their farm when the colony as a whole came under attack by the Indian Army in World War I. After the war, it was transferred to British control, and the ranch was subsequently bought by a man named Sir Charles Ross. Despite being a big game hunter himself, he seems to have taken a very different view of the wildlife, and banned any hunting on his own land in order to preserve it. Similar protection was later extended to the whole of the crater, and the highlands beyond, and has continued in various forms following the colony's independence in 1961 and the creation of present-day Tanzania shortly thereafter.

There have been a number of studies of the crater's native wildlife since the late 1950s, allowing the authors of this review to build up a picture of how it has changed over the years. There are even a limited number prior to that, going right back to Baumann's account of what he found there during his visit. A number of others have looked at individual species - mostly lions and rhinos - giving us additional information on those particular animals. 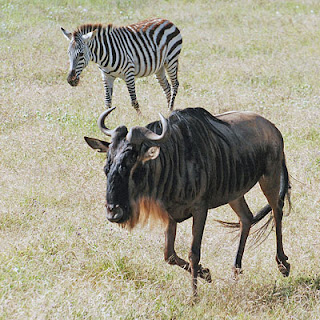 So what do they show? In the early 1960s, the dominant animals in the crater were wildebeest and zebra, preyed on by lions and hyenas. At the time, the wildebeest population was increasing, benefiting from the recent eradication of rinderpest following an outbreak in the crater in 1958. Since the mid '70s, though, that population has dropped, and there's probably fewer of the animals now than there were even immediately after the outbreak.

It's tempting to assume that this must be due to human action in some way. And it sort of is... but not necessarily in the way that you might think. In fact, over the same period, the number of buffalo in the crater has greatly increased, to the point that they are now the dominant herbivores, not the wildebeest. For that matter, zebra populations have been fairly steady, and they still retain the number two spot. What happened in the mid 1970s to cause this switch from wildebeest to buffalo?

In 1974, the local Masai tribesmen were evicted from the crater, with the intent of preserving it for wildlife, rather than for their cattle herds. With the cattle gone, and traditional grassland burning stopped, grass throughout the crater grew longer. This was really good news for buffalo, and also for a type of grazing antelope called hartebeest. But it turned out to be bad news for many of the other herbivores. That's because it wasn't just buffalo that liked the longer grass, but also ticks - and the ticks carried diseases. Wetter weather in the late '90s probably also favoured the ticks, and an outbreak of the malaria-like disease babesiosis in 2001 was perhaps just the worst of many.

The loss of many wildebeest, along with other antelopes, may, in turn, be behind the recent decline in hyena numbers. Lions also suffered, in their case by catching babesiosis directly. Although they're happy enough to eat the buffalo, the drop in the lion population was probably also exacerbated by outbreaks of canine distemper in '94 and '97, followed by a severe drought in '99. (And, yes, lions apparently get canine distemper, not the feline sort. Go figure).

Among other carnivores, hunting dogs and cheetahs have vanished altogether, although they mostly seem to have been visitors anyway. Perhaps there isn't enough food left for them to easily share it with the larger and more aggressive lions and hyenas.

So, sometimes, getting rid of humans in an area actually makes things worse (unless you're a buffalo). But that doesn't mean that we're off the hook by any means - things are rarely that simple. Indeed, what human presence remains in the crater has caused problems in at least two different ways. And the first of those is, perhaps, the most obvious one: poaching.

Ngorongoro happens to be home to one of the few surviving populations of black rhinoceros, a species considered to be on the verge of extinction. There was a brief outbreak of rhino poaching between 1959 and 1960, apparently in response to a severe drought at the time that left the Masai with few other sources of income. However, it didn't really begin in earnest until the 1970s, when outsiders began to come into the area for the purpose. The rhino population seems to have crashed by about two-thirds over this time, until cash rewards for information on poachers were introduced in the late '80s. Although it's not entirely clear, this seems to have largely worked, and the surviving population may be as secure as black rhinos ever get.

Which isn't to say that it's out of danger, unfortunately, because, even without continued poaching, a lot of damage has already been done. There are only about twenty black rhinos left in the crater, and over half of them have the same father. Aside from this apparent lack of genetic diversity, the population may be too low to easily sustain itself, or to protect itself effectively from lion and hyena attacks. Certainly, it doesn't seem to be increasing.

But, as is so often the case, it isn't just by poaching that humans cause problems for local wildlife. There's the simple fact of our existence, and how we live. While the crater being full of tourists rather than game hunters is surely an improvement, it's not without its issues.  Certainly, it's in the interests of the tourism industry to keep the animals alive and healthy, but tourism requires vehicles to drive about, lodges in which to put their customers, and so on. Driving around can disturb some of the local wildlife, and one of the swamps in the crater - formerly a favoured feeding spot for the rhinos, not to mention the local hippos - is drying up as its water is being diverted to the tourist lodges.

It's not all doom and gloom; having previously been entirely absent, a population of warthogs arrived in the crater some time around 1980, and has been there ever since. Nobody seems to have any clue why, but the warthogs must be happy about something.

So that's the overall pattern: a shift from wildebeest to buffalo, the unexplained arrival of warthogs, a decline in virtually everything else, the total disappearance of wild dogs, and fairly bad news for the black rhinos. It's a useful picture to build up, assessing how what's good for one animal might not be good for another, and how the world is rather more complicated than simple stories might suggest.

And why it's a lot harder to come up with effective solutions than we'd probably like.

[Pictures by Harvey Barrison, from Wikimedia Commons]
Posted by JK Revell at 15:30