In fact, especially with larger animals, such fully articulated fossils are pretty rare events, and pretty well everything has at least some bits missing. The science of taphonomy - how the bits of fossils come to be arranged where and how they are - is a large field, but, in a lot of cases it boils down to you having lots of bones jumbled up. It's as if you started off with a number of separate but complete jigsaws, threw them up in the air together, tossed some of the bits in the bin, and then placed the remaining fragments and loose pieces in one box for somebody else to try and put back together.

In short, it's not always obvious which bits of the fossil go with which other bits. If you've got something that's really distinctive, that may not be much of an issue, but where you have similar species together, it can be harder. With mammals, the most identifiable bit of the skeleton is usually the skull, and many fossils are identified on the basis of skulls, or even just parts of them. But the other bones may be harder to match up. If you have, say, two giraffe skulls, and one ridiculously long mammalian leg bone, it's a fair bet that the latter goes with one of the skulls... but it might not be obvious which one.

With that in mind, we can look at a recent review by Denis Geraads and co-workers of the fossil giraffes of the Hadar Formation in Ethiopia. This lies in a desolate region of eastern Ethiopia, not far from the borders with Eritrea and Djibouti, and consists of rocks laid down as sediments under rivers and lake beds. It dates to the late Pliocene, at most a million years before the start of the Ice Ages. Giraffes don't live in the region any more - although there are some in the far south of the country - but they did three million years ago.

The researchers identified two different species of fossil giraffe at the site. One is Giraffa jumae, a species first described by Louis Leakey in 1967. This as a large giraffe, with most of the known skulls and limb bones about the size you would expect of the largest giraffes alive today. However, it was noticeably thinner, and perhaps even slightly taller, than today's giraffes. Like modern giraffes, it had two horn-like projections sticking up from its head, although there is no evidence of the smaller, central, lump that the current species has further forward on its forehead.

The second is Giraffa stillei, first identified back in 1941. It, too, is rather more slender than living giraffes, but it's also rather shorter - although still a fairly big animal, as such things go. The horn-like protuberances - technically called ossicones - are thinner and more pointed than those of either living giraffes or G. jumae, and are sometimes slightly curved.

More interesting than this, perhaps, is how these fossils fit into the wider picture of giraffe evolution. The oldest known fossils that are definitely giraffes (as opposed to okapis) come, not from Africa, but from the Middle East and eastern Europe. They're different enough from the modern form to be given their own genus, with the best known example being Bohlinia, a species that is primitive in a number of ways compared with Giraffa - for example, the skull is more solid, with conical ossicones that are found further forward than in the living species. 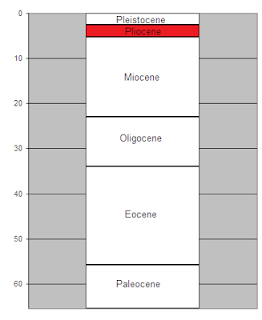 Some time around 5.5 million years ago, Bohlinia, or one of its immediate descendants, crossed over into north-eastern Africa. There, it evolved into at least three different species of Giraffa. One was a relatively small form, Giraffa pygmaea, which, although present elsewhere in Ethiopia, has, for whatever reason, not yet been found at Hadar. It never seems to have been very common, so it may simply be that it's just bad luck that we haven't found any of it's fossils at that site.

The second is G. jumae, while the third, Giraffa gracilis, is very similar to, but slightly older than, G. stillei. There may possibly be some others as well, but not, it seems, very many.

Anyway, the pygmy form aside, there were clearly two species of giraffe at Hadar, apparently living alongside one another, and this raises some interesting questions. For one, given how few fossil giraffe species there are, it's a fair bet that one of them is the ancestor of the modern giraffe, which appears not much later in the fossil record. But which one?

It has previously been argued that G. jumae is the best bet. However, in this new paper, Geraads and co. disagree with that assessment. Their analysis depends on the way that the species changed over time, specifically with regard to their limb bones. This brings us back to the issue of matching up bits of fossils, especially where you have two very similar species living in the same area. Indeed, when it comes to their legs, the two species are so similar to one another, and to living giraffes, that it's simply impossible to assign medium sized bones to either the taller (G. jumae) or smaller (G. stillei) species. That is, the smallest members of one species had legs that were indistinguishable from those of the largest members of the other.

Nonetheless, by looking at the clearer cut cases - the shortest of the short, and the longest of the long - and comparing them with those of other fossils from nearby, the researchers think they've found a pattern. Essentially, both species seem to be getting slightly larger over time. Since G. stillei started out slightly shorter than modern giraffes, that means it was gradually approaching the living species in size, while G. jumae was becoming even more extreme. If they're right, and there isn't some other species we haven't found yet, G. stillei looks like the best candidate for the animal that, only a short time later, evolved directly into the giraffes we have today.

Indeed, the authors think they have found a lineage of three chronospecies - species that gradually evolve into one another in sequence, with no sharp dividing lines between them. In this case, they say, G. gracilis probably evolved into G. stillei in the mid Pliocene, and that evolved into our modern form at around the dawn of the Pleistocene. The sequence isn't, incidentally, based solely on the length of the animal's legs, but also on gradual changes in the shape of their teeth that apparently follow the same pattern.

Another question that arises is how two different species of giraffe lived together in the first place, especially when they overlapped in size. There must have been some difference in the way that they lived and fed, although it's not at all clear what it might have been. The authors also speculate that they may have had dramatically different coat colours, or some other means of telling one another apart that we can no longer see.

Finally, the paper describes how these two giraffes were joined, at the same site and time, by a third extinct member of the giraffe family: Sivatherium maurisium. This was a strange animal indeed, and one further from modern giraffes than okapis are. It represented a completely different line in the evolution of giraffe-like animals, and looked like some bizarre cross between a cow and a moose. But it's also a topic for another time...

[Picture by "Elitre", from Wikimedia Commons]
Posted by JK Revell at 14:13