What Does the Otter Say? 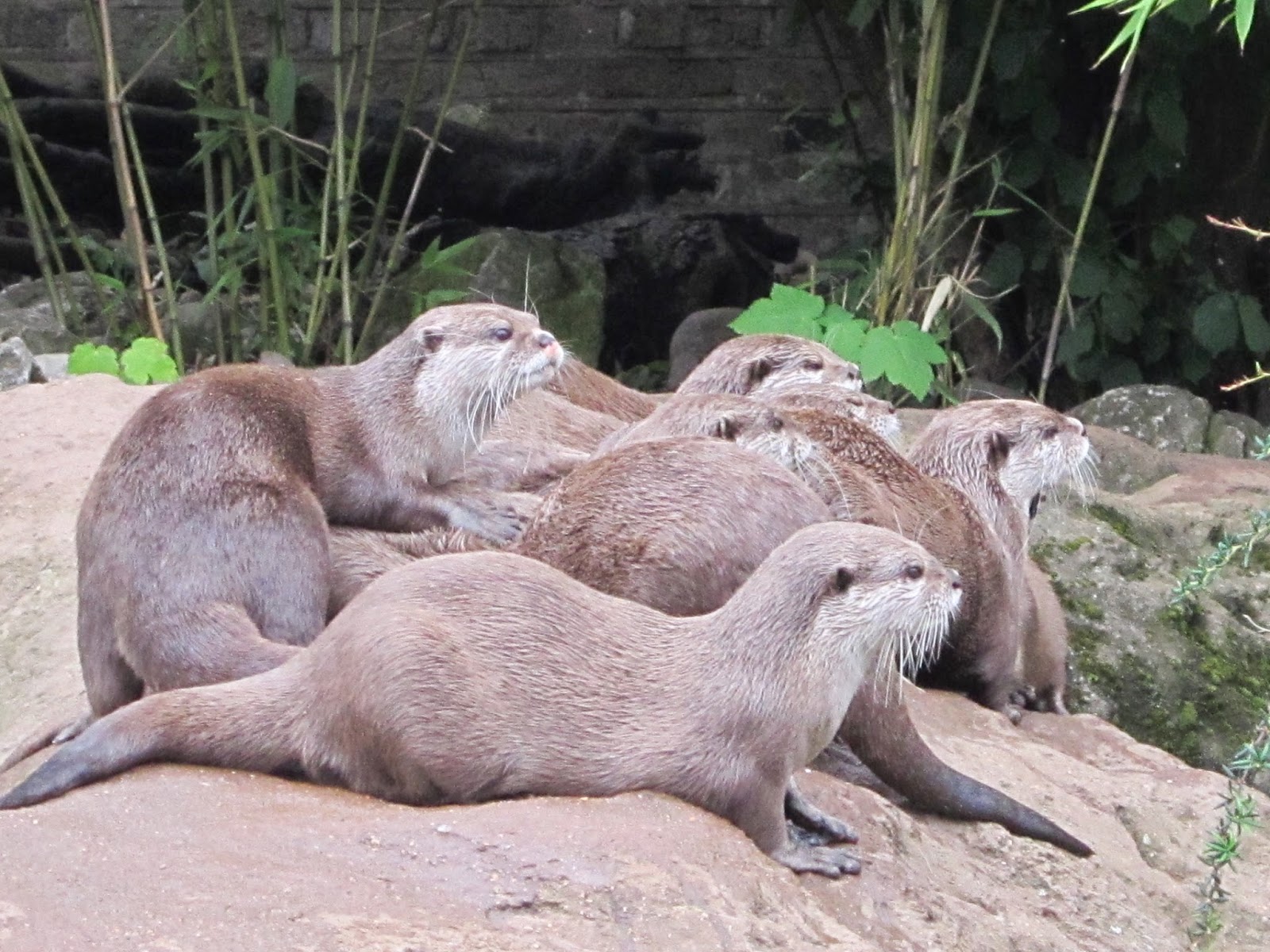 Animals use a variety of different means to communicate with one another. For we humans, speech is the primary means of communication, but even we also have body language as a useful adjunct. (And writing, of course, although that's arguably just a representation of speech, and it's not, that we know of, something our species has always done). For other mammals, scent is usually at least as important.

The human sense of smell is pretty rubbish, by broader mammalian standards, but for those species where it functions effectively, scent can be an effective and useful means of communication. All you have to do is urinate on a lamppost or do what bears do in the woods, and you've left a long-lasting message that conveys all sorts of handy information to anyone who comes by later. But, on the other hand, it does have its limitations. In particular, it's not much good for rapid signalling, such as alarm calls. So, while we may be the only species to "speak" (in the sense of having complex syntactical rules), it's not surprising that we aren't the only ones to make vocalisations.

Having said that, unless you're a whale, vocal calls are really only useful for communicating with other animals that are at least in your general vicinity. As such, they're much less useful to animals that don't lead rich social lives. If you live all your life on your own, then it may be that the only sound you need to make is something to warn off intruders, and perhaps a little something for the breeding season. Apart from that, scent may well be sufficient to meet your needs.

Animals that live in groups, on the other hand, may find it useful to vocalise frequently, whether it's to convey information about the world around them ("There's some great food over here," or "snaaake!!"), about their own emotional state ("paws off my girlfriend!"), or just for social cohesion ("Hi, Mum"). We would therefore expect that animals that live in groups would be more vocally sophisticated than those that do not. To test this sort of thing, though, it's particularly useful to use animals that are quite closely related, and that we'd otherwise expect to make broadly the same kinds of sound. And, indeed, it has been shown to be true, for example, in surveys of multiple species of whales, primates, and even squirrels.

The weasel family (on which I may have written a little in the past) consists of animals that are, on the whole, fairly antisocial. When these animals communicate, therefore, it's often through smell, and most research on mustelid communication has focussed on how this works. However, there are exceptions, especially among otters, which tend to live in family groups. While there have been previous studies on vocal communication in sea otters, and, for that matter, in group-living badgers, we can add another species to that list.

The Asian small-clawed otter (Aonyx cinerea) is one of the most sociable of all otters. I've described previously how their playful vocal repertoire and ease of breeding in captivity make them popular zoo exhibits. A new study by Alban Lemasson and co-workers followed a group of ten otters at the Planete Sauvage Animal Park near Nantes, to see how they interacted with one another, how varied their calls were, and what they meant.

Of course, we have to bear in mind that this is just one group of otters, and, moreover, one that lives in captivity. Having said that, Planete Sauvage is a modern zoo, where the otters have a large pond, a waterfall, and rocks to climb on, rather than just being kept in a cage. They are fed four times a day, have a two-level indoor sleeping pen, and as much drinking water as they want. Furthermore, the fact that this species of otter breeds so well in captivity suggests that, as such things go, they're probably not all that bothered by the lifestyle. And one has to start somewhere, after all.

But, still, it's not the wild.

Anyway, this particular group consists of ten otters, which is about average for the species. Like wild groups, it consists of a single mated pair, and their offspring. In this case, the young were born in three litters, each a year apart - again, perfectly normal for Asian small-clawed otters.

By listening to recordings, and analysing their output on a spectrograph, the researchers were able to identify four different kinds of call. These were usually used on their own, but sometimes in repetitive sequences, or in combination with one another. By watching what the otters were doing when they made the calls, it was then possible to guess at possible meanings for them.

The simplest sound was an atonal bark. This appeared to be an alarm call, although I'll note that this may be an area in which captive living makes interpretation difficult - presumably the otters aren't in much real danger. Calls with constant pitch were mainly used in relation to food. The more common such call was a relatively pure tone, which seemed to indicate possession of food - although the otters didn't appear to distinguish between "this is mine, but you can have it," and "this is mine, and I'm keeping it." The third type of call had more harmonics, and was used when begging for food from others.

By far and away the most common type of call, however, was one that not only had harmonics, but that changed in pitch, producing a brief chirping sound. The otters made these calls constantly through the day, and they seem to be "contact calls" used to bind the group together. There was considerably variation in the exact pattern and pitch of these sounds, probably so that the otters could identify one another individually, or at least get some idea of things like the age and sex of the caller. They seem to be used both when an otter finds itself alone, and when a number of them surge forth together as a group - both situations in which it's useful for everyone to know where everyone else is, and where they're going.

In fact, of all the otters in the group, it was the father who used these calls the most often. Presumably, he had a key role in keeping the group together, and it's notable that the younger otters were more likely to play, and otherwise have positive social interactions, with him, rather than with their mother. On the other hand, the mother seemed to be more protective, making more "alarm calls", and it was her that the youngest otters were most likely to try and cuddle up with when sleeping.

All of this suggests a complex social structure within the group. As we might expect, the parents spent the most time together, sleeping together, and showing the most signs of affection. Similarly, the younger otters were friendlier with their own litter mates than with those older or younger than themselves. One way in which the group was unusual, though, is that all but one of the younger otters was female. Apparently, the solitary young male frequently picked on one of his sisters - the only aggression seen within the group.

This is preliminary data based, as I noted, on one group of animals that aren't living in their natural habitat. The authors suggest a number of ways that we could learn more. For example, what happens when you play sounds back at the otters? But, for now, it tells us something about the family lives of group-living otters, and how they communicate with one another.