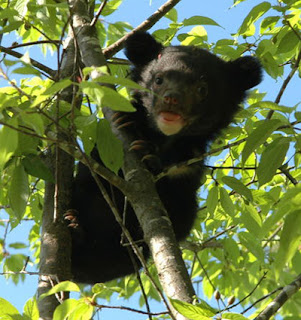 This latter sort of behaviour is, perhaps, most common in primates, but social learning has also been seen in as diverse as dolphins and bats. Knowing the degree to which such things are important to a given animal may have significant implications for conservation. If an animal has to be reared by humans after its parents have died, or if is reared in a non-natural environment where there is simply no opportunity for it to learn, how well will it cope when re-introduced to the wild? Obviously the ideal solution is to avoid doing either of those things, and let mothers rear their children naturally, but that's not always an option, and its important to know just how bad the alternatives are.

Asian black bears (Ursus thibetanus) are not an endangered species yet, but they're certainly moving in that direction. In the absence of detailed censuses, we don't know how many of them are currently alive in the wild, although its undoubtedly still in the thousands. But we do know that, whatever the exact number is, it's a number that's declining, and probably quite fast. Partly this is due, as in so many animals, to loss of their natural habitat as human civilisation expands. There are large stretches of Asia where they used to be common, but are now extinct - this is particularly true in eastern China, Southeast Asia, and the Middle East.

But an even bigger threat is hunting. Asian black bears are killed primarily for their gall bladders, which are used in traditional medicine, although their pelts and paws are also valuable. China and Vietnam, at the least, have begun organised bear farming, extracting the bile without killing the animals, in the hope of stemming the trade in their wild kin. Even leaving aside the fact that this is pretty inhumane for the farmed bears, which are typically kept in small cages, it doesn't even seem to work terribly well, since there's apparently a widespread belief that the bile extracted from animals killed in the wild has extra-special magical properties that make it superior to the farmed sort.

Rescue centres for orphaned bears and the like do exist, but if the aim is to eventually release them back into the wild, how well will they cope if they've never learned how to forage from their mother? One such rescue centre recently published a study on how such orphans begin to adapt to the outside world.

Also known as "moon bears" because of the silver flash of fur on their chests, Asian black bears are a distinct species from the more numerous black bears known in North America, but they are closely related both to that species, and to the larger brown bears. (Quite how close, and which, if either, of the two might be closer is, however, not yet clear). Like all bears, they have relatively large brains and seem to have quite complex lives, so a significant role for social learning is certainly possible. Indeed, we know that this sort of thing is a significant issue for captive-born brown bears. On the other hand, the food preferences of young American black bears seem to be more related to what they've grown used to than anything specifically taught to them by their mother.

The rescue centre where this study was conducted is a pilot project located in the forests east of Khabarovsk in the Russian Far East, close to the Chinese border. The study concerned three cubs, all orphaned after their parents had been killed by hunters. By the very nature of such rescues, the conditions in which the cubs were raised were not identical to those in the wild, even allowing for the absence of a mother. After all, a mother bear does a lot more than teach her children; she also protects and cares for them, and simply dropping young bears into the middle of the woods will hardly do either.

So the cubs were initially reared at the centre by human carers, who had to be careful not to interact them with too closely. Petting the cubs, speaking to them, and so on, are all things that might get them more used to the presence than is entirely safe, given the fate of their parents. So that had to be avoided, but in turn, it leaves the bears more alone than they otherwise have been. They had to sleep in an enclosure during the night, as much to protect them from local predators (mainly tigers, in this part of the world, although brown bears could also be a risk), as for any other reason. And they were let out for only six to eight hours each day, being able to roam the woods under the watchful eye of their carers - who, again, were also keeping a lookout for those tigers.

The cubs were rescued at about the age of three months, and initially fed on formula milk, until they were old enough to forage for their own food on their daily excursions. They were released into the wild at around 20 months, allowing for over a year of observation, for some of which time, of course, they were hibernating. It's perhaps unsurprising that one of the findings of the study was that the bears did alter their feeding habits over the course of the year, just as wild-raised animals would.

In other words, as hibernation approached, they began to fatten themselves up, switching to the most nutritious foods available, gulping down large quantities of a fairly uniform diet in a short period of time. This, it seems, is instinctual, and likely driven by physiological changes in their bodies - perhaps creating a sort of gnawing hunger that is difficult to sate. (Having said which, the carers noted that the bears weren't as effective at bulking themselves up as might be hoped, perhaps due to the conditions of their rearing. In order to keep them healthy, they were given a small amount of porridge in addition to the food that the found for themselves).

Where social learning is likely to play a bigger role, however, is in knowing what foods are good to eat - and which aren't. During their first year of life, the cubs tried to eat almost anything that looked even vaguely as if it might be edible. Trying to eat something something nasty was, however, rarely a mistake they made more than once or twice, showing that they rapidly learned to identify the sorts of things they could eat, and remembered which ones they liked the taste of. This suggest that for Asian black bears, learning by trial and error is enough to get the hang of things. After all, by their second year, it was clear that they already knew what they liked, and where to find it, and no longer needed to test everything around them.

That's not to say that they wouldn't have benefited more from having a mother around. She could quite probably have sped up the learning process, helping the cubs make the right decisions early on, and, in particular, getting them to avoid what they really shouldn't be eating. A dramatic example of this happened in May of the first year, when all three cubs gorged themselves on the leaves of Symplocarpus - a type of arum related to the skunk cabbages of North America.

While adult bears can apparently eat these plants without much of a problem, the leaves are poisonous when eaten in large amounts, and the fact that the cubs were smaller than adults can't have helped. The cubs were all terribly ill as a result, whining in distress, barely moving or eating, and occasionally even suffering convulsions. With the protection of their enclosure, they were fully recovered after two weeks of illness, but it's hard to imagine that this would have been good for them had they been out in the wild.

The implication of this is that a mother's care is helpful for bears even after they have been weaned off her milk. But it may not be absolutely essential; the bears can learn for themselves, at least if given regular access to a natural habitat where they can do as they wish. We can't say what would have happened if they had been reared exclusively in an enclosure, but then, it would be unethical to try, if any alternative exists.

Yes, in the absence of a mother to warn them off the skunk cabbages, to care for them if they get ill, and to ward away the tigers, they need protection from some other source. And, yes, it would surely be better for that care to come from a parent than from a human. But if the mother is dead, we humans can step in without entirely wrecking the bears' education. They just need access to nature and a chance to learn for themselves.