A Side Order of Flies 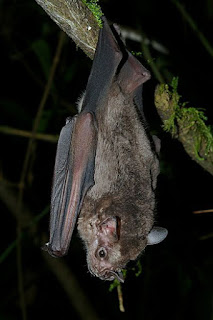 Most species of bat eat insects, whether caught on the wing or plucked from leaves or other surfaces. But this is by no means true of all species, with the second most common diet - perhaps representing around a quarter of known species - being one based on fruit. Indeed, fruit-eating had evolved more than once among bats, with the giant fruit bats of the Old World not being especially close relatives of the much smaller ones found in the Americas.

While a great many herbivorous and omnivorous mammals include fruit as part of their diet, one estimate is that only around 10% of mammalian species rely on it as their primary source of food - most of them bats or primates. While that's not exactly a tiny proportion, given the number of mammalian herbivores in general, it isn't a huge one either. This, it has been suggested, is because, while fruit are great as a source of calories, they tend not to be high in protein, and a healthy animal needs a supply of both.

In the case of humans, eating plenty of fruit is well known to be a good thing, but trying to eat nothing but fruit for any extended period of time is likely to be a problem. Not only are you likely to suffer from lack of protein in your diet, but you will also suffer deficiencies in certain minerals and vitamins. That one of the main vitamins you would be short of is vitamin D, which promotes calcium absorption in the gut, is a particular problem, bearing in mind that there isn't much calcium in fruit to start with. For this reason, fruit-only diets can be a real problem for children, who need that calcium to grow their bones.

In the case of we humans, you could at least get around that problem with nutritional supplements if you really had to (although a balanced diet is probably a better plan). Fruit bats don't have that option.

One example of such a bat is the Jamaican fruit bat (Artibeus jamaicensis), a particularly common species found through Central America and the Caribbean, and from southern Mexico to northern Peru. While it will eat a wide range of different fruits, about 80% of its diet consists solely of figs. One wild fig has an energy content of around 7 kJ (1.6 dietary calories), mostly in the form of sugar, which, if you're the size of a bat (50g, or 1.7 oz., in this case) is a pretty reasonable amount. But there isn't a lot of anything else in them, which must surely be a problem for the bats.

One way that they minimise this issue is to feed off a variety of different figs, with a mix of different nutritional values, as well as focussing on those species of fig that are the most nutritious. Even so, this is still too specialised a diet to supply all of their needs, and the bats have to have to top up their protein, in particular, by eating leaves and, yes, insects.

How and when do fruit bats eat insects? They certainly aren't a large part of their diet, and the little we know suggests that the bats aren't particularly discriminatory when it comes to which insects they eat - flies, beetles, and ants all seem to be common food sources. But that doesn't necessarily mean that the bats aren't specifically looking for insects to eat (rather than happening to find them crawling about on the figs), just that they don't care much which ones they catch.

If this really is something that the bats are looking for to supplement their diet, then they will presumably do so more frequently when they are particularly short on protein, or other nutrients. The time that that's most likely to occur is either during pregnancy, or when they are suckling their young.

We know that, in humans, pregnancy not only increases the rate at which we burn calories, but also boosts demand for protein and minerals, and for vitamins such as folic acid. It's hard to imagine that this isn't true for bats, too, and, in most mammals, producing milk places even more of a nutritional demand on the mother. In the case of Jamaican fruit bats, the young are almost fully grown by the time they are weaned, and we know that lactating mothers can eat anything up to three times the amount of food they would normally. Might they also shift to eating a higher proportion of insects during this time?

For that matter, how do you find out? Since you can't realistically follow them about and watch everything they do, a common method for evaluating an animal's diet would be to examine its droppings. Here, though, we want to compare pregnant, lactating, and unaffected bats (including males), so we'd need to know exactly which bat had left which dropping. Which is hardly practical. Or you could just kill lots of them and examine their stomach contents... but that's not exactly a great plan, either.

So what a recent study did was to take blood samples from bats at a large cave in Mexico over a period of 18 months. The blood samples were then analysed to determine their isotopic balance, specifically for something called the δN. The idea here is that plants contain a stable mix of nitrogen-14 and nitrogen-15, but nitrogen-15 is more readily incorporated into the body tissues of animals (including blood). So a herbivore will have proportionately more nitrogen-15 in its blood than a plant has in its leaves or fruit, but a carnivore that eats that herbivore will have even more. The further up the food chain you are, the more nitrogen-15 you have in your blood.

This doesn't help us with determining how much the bats rely on eating protein-rich leaves, rather than fruit. But the more insects they eat, the closer they edge to carnivory, and the higher the δN value (that is, the ratio of nitrogen-15 to 14). Of course, they won't get very far on that scale, since the vast majority of what they are eating is still plant matter, but modern detection methods are good enough to determine even quite subtle changes in dietary composition in this way.

The results of this analysis showed that Jamaican fruit bats, regardless of sex, change the amount of insects they eat throughout the year. Presumably, when more insects and/or less fruit are around, they'll shift the balance of their diet accordingly. They are not, in other words, so absolutely fixed in their preferences as to ignore what's abundant, which shows that even an animal with a highly specialised diet does have rather more flexibility than you might suppose.

But superimposed on this seasonal pattern was another that showed changes depending on the individual bat's reproductive status. Perhaps surprisingly, this was true of males as well as females. Jamaican fruit bats, like most mammals (but not humans) only produce sperm at certain times of the year, during, and in the run-up to, the breeding season. And, it turns out, when they have to divert some of their nutrients to making sperm, they do eat a higher proportion of insects to make up the balance.

As for the females, they do indeed, partake of more insect-based richness when they are pregnant than at other times. Oddly though - and this certainly seems to have surprised the researchers - they, if anything, ate even less insects than usual when they were lactating. Quite why this should be really isn't clear. The bats breed twice every year, and in both wet and dry seasons, so it seems unlikely to me that there just happen to be less insects around to eat when they are suckling young. Possibly there's some other physiological change going on, or the bats are eating more protein-rich leaves, or a different mix of fruit at these times - none of this would be obvious from the study.

But the key point is that, while we have an animal that eats almost nothing but fruit (and mainly figs at that), the key word is "almost". Not only is those most frugivorous of animals not really 100% fruigivorous, but bats of both sexes can change their diet to one with a higher "meat" content when they really need to.

[Photo by Karen Schneeberger, from Wikimedia Commons.]
Posted by JK Revell at 13:31