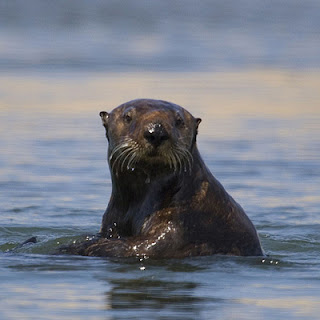 Otters and badgers are both members of the weasel family, the Mustelidae. As a result, while they are visibly quite different, they have a number of anatomical similarities, reflecting their shared ancestry. Indeed, some of the similarities, such as those in the precise shape of their teeth, are rather greater than one might expect simply from them belonging to the same family. On the basis of this, it was being suggested as recently as the 1990s that otters were essentially aquatic badgers - descendants of early badger species that had entered the water, developing webbed feet, a long muscular tail, and so on, in the process.

We now know, from various genetic and molecular studies, that this isn't so. The closest living relatives of otters are probably the weasels themselves and/or the zorillas and their kin, with badgers representing a rather earlier branch in the mustelid family tree. Given this, the apparent strong similarities between the two are either a case of parallel evolution, perhaps due to the fact that, by the standards of weasels, they're both fairly large animals, or, perhaps more likely, that they are ancient features of the group that happen to have been lost in their other relatives.

At any rate, interesting as such features might be to those who study such things, they're hardly likely to make you confuse an otter for a badger. At least, not if you're looking at a living species. When it comes to fossils, especially if they're not complete, it can be a different matter. More recent fossils aren't really an issue, and it's generally possible to be very precise in identifying not merely that a particular animal is an otter, rather than a badger, but exactly what sort of living otter it's closest to.

But the further you go back in time, the more of an issue it becomes. That's partly because older fossils are more likely to be fragmentary. If the teeth of otters and badgers look very similar, and all you have to go in are some pieces of the jaw, that does make your job of identifying the animal quite a bit harder. But it's also likely to be the case that, the further you go back down the evolutionary tree, the more similar the species are going to be anyway; when we look at the features that should allow us to tell the two apart, some early fossils have both those that are supposed to be unique to badgers and the ones that should be unique to otters.

Perhaps one of the better known examples of these animals is Mionictis, first identified from bits of jaw found in Nebraska and dated to around 16 million years ago, around the middle of the Miocene epoch. From at least the 1940s, this has been thought to be an early otter, but some very similar specimens from Europe discovered from the 1960s onwards, have instead been more commonly assigned to the badgers. Indeed, this was one of the key animals suggested in the 'aquatic badger' theory of the 1990s as a possible ancestor for living otters, one that was still half-way along the evolutionary path between the two.

Except, now that we know that otters aren't really descended from badgers, that can't be the case - Mionictis and its relatives have to be either one or the other (or neither). Enter another fossil genus, Siamogale. This was first described in 1983, from a 13-million year old deposit in Thailand. On the basis of the shape of one of its molars, it was originally considered to be an otter, but later studies were either ambiguous, or tended to shift it more towards the badgers. Whichever it was, it seemed to be a relative of Mionictis.

This was, however, on the basis of really not very much of the animal. That changed earlier this year with the discovery of a much more complete skull and lower jawbone found in Yunnan Province in southern China and dated to around 6 million years ago. This is much later than the previously known Siamogale fossils, and it has been identified as belonging to a new species of that previously known genus.

In a classic example of the sort of mixed signal I've been talking about, the last upper premolar looks like that of an otter, while the tooth immediately behind it (that is, the first upper molar) looks like that of a badger. The species has been named Siamogale melilutra - the second half of the name literally means "badger-otter". Crucially, though, because it is more complete than previous fossils, we have rather more clues to work out exactly what it was.

From geological and other fossil evidence, the site at which the animal lived was, at the time, a warm and humid oak forest. Among other things, fossilised water lilly seeds have been discovered at the site, which certainly suggests the sort of place that otters ought to like. As for the size of the animal, all we have is the skull, but that was around 20cm (8 inches) long, so, if it was an otter, it can reasonably be described as a giant one.

And a detailed comparison of the shape of the skull, and of its teeth, suggests that an otter was exactly what it was. It was a somewhat unusual one, with features that more closely resemble those of the sea otter than any other living species. That would place it on something of a side-branch, related to a whole bunch of other extinct otter-like animals, such as the giant Enhydriodon from the Pliocene, and Vishnuonyx and Sivaonyx from the Miocene. These three animals all come from southern Asia, with a particular number of fossils from India, and show a trend of becoming larger over time, and of developing large, blunt teeth, of the sort found in those living species of otter that focus on eating shellfish such as crabs or abalone.

Siamogale then, is an otter, and with one of its species being 13 million years old, it's a relatively early one. It lived in the subtropical forests of southern Asia before some its relatives moved further north, and some of them, perhaps, headed out to sea, becoming the modern sea otters of the northern Pacific.The fact that we now know it is an otter, despite having some features said to be unique to badgers, doesn't mean that the same will be true for those other animals, such as Mionictis, that share the same traits; the balance of opinion that they're probably closer to badgers isn't changed by this.

But at least one ambiguous badger-otter is now much less of a mystery.

[Photo by Mike Baird, from Wikimedia Commons.]
Posted by JK Revell at 14:32