At any rate, elephant seals are certainly big. Fully-grown females range from 215 to 300 cm (7 to 10 feet) in length, and weigh between 300 and 600 kg (660 to 1300 lbs), larger than the males of many other seal species. While they start out the same size, however, males put on a prolonged growth spurt once they hit puberty at around three years of age, and, by the time they're fully grown five or six years later, they're much larger. An adult bull can reach up to 400 cm (13 feet) in length, and can weigh over two and a half tons.

It's likely this great disparity in size that explains why male and female elephant seals feed in different geographic areas, staying well apart from one another - the females generally being much further out to sea, and so likely focussing less on bottom-dwelling prey. In general, though, they're both eating a significant amount of squid, along with fish up to the size of small sharks.

Significantly, in order to obtain this food, elephant seals have diving abilities that are impressive even by the standards of seals. Once they get to their feeding grounds, they can spend almost 90% of their time below the waves, catching just a few minutes of air at the surface before diving again. Many individual dives are unsuccessful, and they do vary considerably in both length and depth, but around 20 to 30 minutes at depths of 300 to 800 metres (1,000 to 2,600 feet) seems quite normal. In fact, because they're further out to sea, it's the smaller females that tend to dive deeper, and, at a push, can reach depths of a remarkable 1,600 metres (one mile). Conversely, the males can make longer dives, sometimes staying underwater for an hour at a time, but typically don't need to dive as far down. 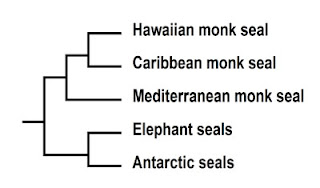 How do they achieve such feats of endurance? As one might expect, there are a number of physiological differences between elephant seals and land-dwelling mammals, and these are generally similar to those in other seals - albeit, perhaps, rather more extreme. Notably, as the seals dive, their heart rate slows and blood is retained in the central parts of the body, and not distributed so much to the periphery. In part, this may be because it helps to prevent lactic acid - the chemical by-product of exertion that leads to muscle cramps - building up in the blood.

These factors combine to make elephant seals far more tolerant to a prolonged lack of oxygen than would otherwise be the case. There are anatomic oddities, too. For their size, elephant seals have about twice as much blood as one would expect, which, combined with the fact that almost two thirds of that blood volume consists of red blood cells (compared with the one third in most other mammals), allows for greatly enhanced oxygen storage capabilities. In fact, when they aren't diving, it seems that these extra blood cells may be something of an inconvenience, since they make the blood thicker and harder to transport around the body when that's what you actually want to happen. To get around this elephant seals (and likely other seals too, to at least some extent) have a modified spleen that can store blood cells when they aren't needed.

As with many other seals, it has been shown that the ears of elephant seals are better suited to hearing underwater than on land, but there are also other changes to their ear structure that appear to prevent aural injury when diving to great depths. Given the noise they make on land, though, it's evident that they can hear well enough, and it's interesting to note that the exact form of the sounds they make varies between different colonies.

Not only do males and females feed in different parts of the ocean, but they also moult at different times of the year (the females go first), so, at least once they're past puberty, they basically never encounter one another outside the winter breeding season. During this time they can't feed, and they aren't well suited to spending time on land in warm weather - when they are compelled to do so for the summer moult, they do as little as possible and try to stay within reach of the cooling sea spray. During the winter, this is less of a problem, and it's the males that arrive first, fighting for prime beach space for up to a month before the first females join them, and then remaining for another two months as the females arrive in dribs and drabs to give birth.

In total, therefore, males are doing without food and potable water for at least a quarter of the year, a feat that's impressive even for seals. Although much of their ability to survive this is explained by hormonal and biochemical changes, it has also been noted that those large noses of theirs  are anatomically adapted to retain the water in expired air; it's likely not their main purpose, but rather the co-opting of an existing feature to give the animal additional advantages. Similarly, they hold their breath for up to 25 minutes at a time while sleeping on land, apparently reducing energy consumption and water loss just as if they were diving.

Elephant seals are born with black fur, not the white seen in many other species, having no need to camouflage themselves against ice. For the next four weeks, they suckle from their mother, increasing their weight by 10% every day. As is typical for seals, as soon as they are weaned, the mother, by now less than two-thirds of her former weight, immediately abandons them and goes in search of sex.

That only lasts for around 48 hours, or three days at most, but when those days are varies between individuals, which is why males have to hang around for so long, only heading out to sea themselves once the last available female has left the beaches. Strictly speaking, elephant seals don't form harems in that males don't protect and control a specific number of females, but they certainly do drive rivals away from wherever they happen to be sitting, and the bigger, stronger, and more dominant males get to mate with far more partners than their brothers.

For the most part, they rely on visual threats and roaring to achieve this, escalating to chasing if that doesn't work, and actual physical combat is relatively rare. Nonetheless, it does happen, and can get quite bloody. Indeed, because, unlike many other seals, mating takes place on dry land, it is by no means uncommon for males to interrupt one another in flagrante, and, because the sex only lasts about five minutes, such action has to be quick and decisive. In this respect, it's significant that not only are males much larger than females, with a prodigious nose that amplifies their vocal threats, they also have much larger canine teeth. Which clearly have nothing to do with their diet.

Not that the females don't get aggressive, too. In their case, though, it's largely to protect their young, or to fight one another for the best spots in which to give birth. By the time they are mating, that's all done with, and the pups are entering a long fast that can last for over two months before they are ready to enter the water and feed for themselves. During this time, they survive on their considerable fat reserves, maintaining protein reserves and lean mass as far as possible, and the hormonal changes involved seem to be broadly similar to those they will later use as adults during the fasts of the breeding and moulting seasons.

Pretty well everything I've said above about the northern elephant seal also applies to their close relative, the southern elephant seal (Mirounga leonina). Since elephant seals collectively are more closely related to the seals of the Antarctic than to those of the far north, it's likely that these are the ones that have moved the least from their point of common origin. Having said which, the exact sequence of events is unclear, and it's only very recently that we've found any relevant fossils in the Southern Hemisphere, weakening the earlier theory that they originated around the west coast of Mexico before the Antarctic seals headed south.

While the females of the two species are around the same size as, and visually indistinguishable from, their northern kin, the same cannot be said of the males. Male southern elephant seals are even larger than the northern sort, in some exceptional cases weighing over three tons each. Their diving ability is also superior, with two-hour dives to depths of up to 2.3 kilometres (1.4 miles) having been recorded. This, it should be noted, is deeper than a sperm whale is known to be able to manage! Obviously, though, these are extreme dives, and they're usually much less than that.

Three distinct populations of southern elephant seal have been identified, one each in the southern Atlantic, Indian, and Pacific Oceans, but the differences are not considered strong enough to identify them as separate subspecies. Breeding colonies are dotted across the islands of the far south and along the Patagonian coast. Before the sealing industry, and possibly the effects of climate change, pushed them further south, they could once also be found as far north as Tasmania. There is some evidence that they may be less aggressive than northern elephant seals, but that's probably just because their breeding beaches are less crowded, reducing both the need and the opportunity for violent competition.

Squid comprise about three quarters of their diet, although the exact details, and what kinds of fish, krill, and octopuses they may be eating alongside vary with precisely where they feed. As with the northern species, females forage further offshore, which, in this case, necessarily also means further north, affecting the balance of available food.

At the northern edges of their range, southern elephant seals have to compete with sea lions and fur seals for food, but, for much of the year, they are too far south for that to be an issue. However, they do share these more Antarctic waters with four species of true seal, and it is to two of those that I will turn next.

[Photos by Frank Schulenburg, Jerry Kirkhart, and B.navez, from Wikimedia Commons. Cladogram adapted from Higdon et al. 2007 and Fulton and Strobeck, 2009.]
Posted by JK Revell at 15:37