The Crusty Forearms of Male Bats 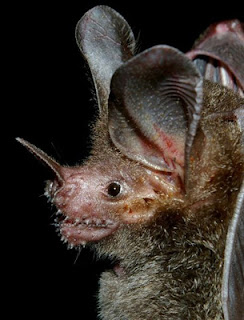 Bats, of course, are not blind. There eyesight is, in fact, pretty good in the majority of species. Which makes sense for an animal that has to fly around at night when the light is dim but not entirely absent. It's only for animals like moles, which live underground, where the light can't penetrate at all, that vision becomes an expensive and unnecessary luxury.

Having said that, many species of bat do spend a lot of time in caves, and, in there it really is too dark to see anything, no matter how good your night vision might be. As a result, the other senses of bats are often highly tuned. Hearing is the obvious one, since bats rely on that for their sonar abilities, but many species also have well-developed senses of smell. In particular, since bats also tend to be highly social, scent often forms a crucial part of their ability to communicate with one another - as it does for many other mammal species.


Scent can communicate a great number of things, from "stay away" to "I'm looking for a mate". In the latter case, the ability to produce a particularly effective and high-quality smell is often a signal of physical fitness, since it takes more energy to do so. A bat (or other animal) that has to divert calories to more immediate survival matters - whether because it is malnourished or just fighting off an infection - simply isn't able to produce the very best odours in sufficient quantity to seem sexually attractive to a mate.

A great many bats do this, and sometimes manage it through more complex methods than one might assume, actually daubing themselves with appropriate fluids rather than just secreting them from scent glands. The chest and throat seem to be the most popular locations for smearing such substances, but, naturally, it varies among species. It's also mostly the case among males, with the females seeking them out rather than producing odours of their own, and, since part of the point is that it's energetically costly, it's mainly something that they do during the mating season, rather than throughout the year.

The fringe-lipped bat (Trachops cirrhosus) is native to tropical forests throughout northern and central South America, and as far north as southern Mexico. It's not particularly a cave-dweller;  although such behaviour is not unknown, it generally prefers to roost in groups of half-a-dozen or so in hollow trees or logs. It belongs to the extremely varied leaf-nosed bat family, and prefers to eat insects, supplemented with a little fruit, but also eats rather larger prey - at least some individuals are said to specialise in eating frogs, which they hunt by following their sounds.

Recently, a number of fringe-lipped bats were captured as part of a study, and, on examination, turned out to have a strange crusty goo smeared onto their forearms, emitting what the researchers described as a "pungent odour". This was present only in the males, and, it turned out, really didn't resemble anything previously described in the species, or, for that matter, any other kind of bat. Since it was present only in the males, the assumption was that it had to have something to do with reproduction, but was that true, and, anyway, what exactly was this gunge?

One thing that has to be said at this point is that, prior to the study, we knew basically nothing about the reproductive habits of fringe-lipped bats. There are, after all, somewhere around 1,200 different species of bat, and we name new ones every year. It's hardly surprising then, that we haven't studied all of them in detail yet. Basically, about the only thing we did know about reproduction in this particular species is that they give birth to a single infant at a time, which given that that's true for essentially every bat ever, isn't hugely informative.

However, as a result of examining 473 bats to check the crustiness of their forearms, we can now add at least one further information to this. Visibly pregnant females were caught mainly during March and April, females with suckling young during May and June, and weaned juveniles between June and August. So, not only do we now know that they have a breeding season, we know roughly when it is.

Since they live in the tropics, there is no 'summer' or 'winter' as such, but there is an annual rainy season. This happens to be between June and August, suggesting that birthing is timed to coincide with the time of year when there's most food available (especially, one assumes, if you happen to like eating frogs). We still don't know how long their pregnancy lasts, but, assuming it's around six months, as it is for many of their close relatives, we'd take a guess that the actual mating season must be some time around November to December.

The smelly crust was found only in adult males, and was, indeed, most commonly seen on those bats captured in the last few months of the year. Perhaps more significantly, all bats displaying the crust had enlarged testes, indicting that they were actively producing sperm and ready to mate.

The reverse wasn't necessarily true, so either some bats that were willing to mate couldn't produce the crust for some reason, or sometimes their testes can be enlarged without being ready to make sperm -
it's hard to know for sure without cutting them up and checking under a microscope. However, the fact that the bats with the crusty forearms were physically fitter and heavier than those without would suggest that the former is the more likely explanation.

So what is this crust made of? The obvious explanation would be that there are scent glands of some kind on the bats' arms that produce it, but there's nothing visible, and even microscopy showed no sign of any unusual secretory structures. They do, however, have a visible gland on their chests, which is much larger in males than in females, and secretes a white oily fluid. In other, related bats, this is a scent gland... the only problem is, in fringe-lipped bats it turns out that the fluid doesn't smell of anything.

Close observation of some fringe-lipped bats in captivity, however, revealed that the males regularly do something never before seen in any bat species. They scratch their chest gland with their wing-claws, stick the claw in their mouths to lick and nibble it, and then proceed to lick their forearms, leaving a visible deposit behind when they do so.

Without detailed chemical analysis, it's hard to know exactly what's going on here, but the implication is that the crust develops from a combination of glandular secretions and something in the bats' saliva. This use of a combination of secretions to make one deposit is unusual among mammals, but far less so among bats in particular, and saliva on its own is known to be a chemical signal in some non-bat species, so it's not too far out an idea.

Why the forearms? One would expect that this would make it easier for the males to waft their pungent odours towards females by flapping their wings, although the researchers had to concede that they never saw them doing this, despite plenty of opportunity. It's possible, they say, that they only do this while flying in the open - something that greater fishing bats (Noctilio leporinus) are known to do.

Clearly, this discovery raises as many questions as it answers. Where does the smell come from? Is the production of whatever-it-is under some kind of hormonal control? Why do some males produce the stuff, albeit in smaller quantities, even outside of the breeding season? Are we, in fact, right that female fringe-lipped bats find the smell sexy?

But then, there are always more questions to answer. Such is the nature of science.

[Photo by Karin Schneeberger, from Wikimedia Commons.]
Posted by JK Revell at 14:37