Silence of the Pacas 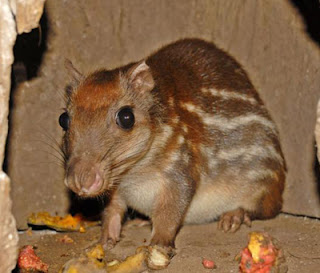 Whether or not a given species of animal lives in groups is something of a trade-off. Several different factors are involved, but just one example is that you will simultaneously be more visible to predators and be protected from them by "safety in numbers". For many animals, the benefits outweigh the downsides, although a lot depends on the individual environments and lifestyles of those creatures.

But living in groups also brings its own requirements, perhaps most notably the need to communicate with other members of your herd or pack. Safety in numbers, after all, is of limited utility if one member of the group can't warn others of something dangerous it's just seen. And this isn't simply a yes/no situation; the more complex the group structure, it is argued, the more sophisticated the communication needs to be.

This is called the "social complexity hypothesis", and one argument in its favour is that the most socially complex animal of which we know - ourselves - also happens to have the most complex communication system. But one example doesn't prove a trend, and scientists have examined many other species to try and fill in the rest of the trendline - and prove it exists. For example, it has been shown that meerkats have more complex calls than other kinds of mongoose that live less socially. Although the precise details can be a little more subtle, similar patterns have been shown in, among others, ground-dwelling squirrels and non-human primates.

Spotted pacas (Cuniculus paca) are large rodents common in Central America, northern South America, and central South America east of the Andes. Since there are only two or three species in their family, they don't have much in the way of close relatives, although, within the larger rodent family tree, they belong broadly to the "guinea-pig-like" group. Indeed, there are some physical resemblances between pacas and guinea pigs, with perhaps the most obvious differences being the spotted coat and the fact that they're somewhere between a border terrier and a cocker spaniel in size.

Spotted pacas are native to tropical forests of various kinds. They spend their days in burrows, coming out at night to search for fruit. Most sources will describe them as solitary animals, so we shouldn't expect much in the way of complex communication signals. Certainly, the evidence we have suggests that they don't make sounds very often.

But this over-simplifies the situation. For one thing, they do live in pairs for a short while when they're breeding, rather than just having a one-night stand. Even outside of this time, there are apparently some unconfirmed reports of them travelling in small groups, and they certainly don't seem to mind living in groups on farms, where they are commonly raised for their meat.

If this is so, and the social complexity hypothesis is correct, it might be that spotted pacas have more sophisticated communication systems than we'd expect for an animal that's supposedly solitary. A recently published study aimed to find out.

The researchers watched and recorded over fifty spotted pacas living on a farm in Brazil. Clearly, this isn't the animals' natural habitat, so we can't say that their behaviour is exactly what they'd do in the wild, but it should at least give some idea of the range of vocalisations they are able to make.

In total, they identified nine different sounds that the pacas could produce, although one was just thumping on the ground with their feet. For example, they made "bark" or "roar" sounds when alarmed - often because a farmer had picked them up for a medical treatment, but also in other situations, such as one female trying to avoid an over-amorous suitor. A "groan" sound was also used as an alarm call, particularly when the animal was injured, suggesting that this implies pain rather than just concern.

"Growls" were used while defending burrows, "snores" while cautiously approaching another individual, and "cries" when young became separated from their mothers. In a more pleasurable context, "click" sounds were used just before feeding, or when they saw a farmer approaching with food.

Particularly since they were able to combine some of these sounds, and use these combinations in what appear to be subtly different contexts, this does sound more sophisticated than one might expect - and it's worth noting that, most of them time, they did remain silent. But to know whether that means much, we need to know what sounds other, related, animals make, and which of those animals live in groups.

Using a family tree of pacas and related species for which similar studies already exist, the researchers applied a mathematical formula that, it's claimed, show how large we'd expect the group size to be for the number of noises they make. They came up with an answer of 8.7, which is quite obviously higher than the actual group size for spotted pacas.

The researchers concluded from this that spotted pacas would, if left to their own devices, naturally live in larger groups, but they don't because of the intense hunting that they suffer in the wild. (They're apparently very tasty). I'll note that, while this is certainly possible - plenty of other animals have altered their behaviour to avoid humans, after all - it could also be the other way round. That is, complex communication might evolve first, giving animals the potential to live in larger groups, but, in this case, perhaps for ecological reasons, it's potential that has yet to be realised.

Or it's a longer term thing, with the prehistoric ancestors of pacas having living in groups, changed their lifestyle over a couple of million years or more, and just never ditched the communication methods. Or, of course, there could be something incomplete in our knowledge of the behaviour of other, supposedly solitary, related animals.

Which goes to show that even fairly detailed studies can go a long way to describing what happens without it necessarily being clear why. But, either way, this does indicate that spotted pacas are capable of more sophisticated communication than we would expect, and that they are capable of relatively complex social interactions.

Whether or not they want to engage in them is, however, a different question.

[Photo by Agência de Notícias do Acre, from Wikimedia Commons.]
Posted by JK Revell at 13:46