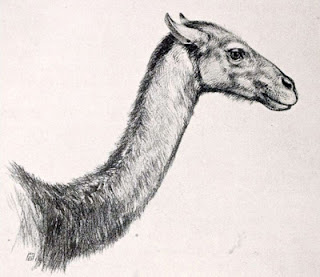 Nonetheless, three different groups within the camel family did survive, and two of them survive today. Protolabis and its close relatives were the exception, but even they survived for millions of years, before finally dying out altogether at the dawn of the Pliocene. With moderately long legs and snouts, they probably looked as much like deer as they did modern camels; they were also about the same size as deer, and, so far as we can tell, had a similar diet.

The two groups that did prosper are the two that we are familiar with today: the llamas and the true camels. Strictly speaking, the word 'llama' refers only to the domesticated animal, but in a broader sense, it can be applied to what would technically be called the lamines - those animals more closely related to the living llama than to the Bactrian and dromedary. Hemiauchenia is the best-known example of this group from the Late Miocene, and, in fact, didn't die out until almost the end of the Ice Ages, millions of years later. It's this animal that is thought to have crossed the rising Panama land bridge to colonise South America, eventually giving rise to today's llamas and alpacas.

As for the true camels, these too were more varied in Late Miocene North America than they are today worldwide, with up to three different genera living alongside one another at some localities. Late Miocene camels already seem to have had a similar diet to the living sort, being primarily browsers rather than grazing on grass, but, at this time, they will not yet have been adapted to the harsh desert landscape in which their descendants are so common. However, it is during the Late Miocene, probably around 6.5 million years ago, that camels first crossed over the Bering land bridge to Asia.

The particular animal that most likely did this was Procamelus, a llama-sized animal found across much of North America, that seems to have already evolved the soft foot-pads of modern camels (insofar as we can tell from just the skeleton). Assuming this is right, its immediate descendant would have been the Eurasian Paracamelus, thought to be the direct ancestor of modern Bactrian and dromedary camels.

However, Procamelus was far from alone in North America, being accompanied by two much larger kinds of camel. First were the "giant camels", of which the oldest we know of is Megatylopus. Even this was at least six feet tall at the shoulder, perhaps slightly larger than a modern Bactrian camel. This was followed by the appropriately named Megacamelus, the probable ancestor of the even larger Titanotylopus and Gigantocamelus (possibly two different species of the same genus) that were common in the later, Pliocene, epoch. The latter, judging from the shape of the bones in their back, had already evolved the hump(s) for which camels are so well-known today, but it's not clear whether the same would have been true of the Miocene species.

Large though Megacamelus may have been, whether it was the largest camel of its day rather depends on your definition. It was, most likely, the heaviest, but it certainly wasn't the tallest. Descended from the Middle Miocene Oxydactylus, that would have been Aepycamelus. This name literally translates as "high camel" although, for a long time, it was thought to be more closely related to llamas. (A  previous name, Alticamelus, was rejected as far back as the 1950s on the grounds that it wasn't entirely clear which animal the original scientists who coined it had been talking about).

Aepycamelus may have been a camel, albeit not an ancestor of either of the living species, but it didn't look much like one. This was because of its remarkably long legs and neck. Multiple species are known, but the very largest is estimated to have weighed something like 700 kg (three-quarters of a ton) and to have been anything up to 5.5 metres (18 feet) in height, to the top of its head. That's fairly similar to a modern giraffe, although the other species would have been smaller, and a lot likely rides on how vertically it held its neck.

Given the similarity in shape and size, it's tempting to assume that Aepycamelus ate in a similar manner to modern giraffes, plucking tasty leaves from the treetops. The shape of the jaw isn't entirely consistent with that, meaning that these animals have no direct analogue alive today, but even so, the evidence suggests that it was probably a browser, simply feeding on higher vegetation than living camels do.

Another group of animals that was more diverse during the Late Miocene than it is today are the horses. There had been numerous different species of horse living simultaneously in North America during most of the Early and Middle Miocene, and this wasn't something that began to change until the Late Miocene was almost over.

While older books often present the evolution of horses as a single line, with the animals generally getting larger and more horse-like over time, the reality is more complex. Many of the earlier side-branches in equine evolutionary history had died out by the Late Miocene, but the two main lines from earlier times both survived through the majority of it.

One group consisted of the three-toed Hipparion and its relatives Pseudhipparion and Neohipparion. These were still relatively small horses by modern standards, and they seem to have fed more on leaves and bushes than on grass. They were common enough that in some cases we have a large number of fossils, enabling us to analyse things like their rate of tooth growth and wear. This allows us to get some idea of how rapidly they aged, with one study suggesting that those which survived to adulthood could expect to live about eight years. The absence of foals at some sites where they are otherwise common also suggests that they may have migrated, giving birth in places where they spent only a part of the year.

Contrary to the general perception that horses became larger over time, at least some hipparionine genera, notably Pseudhipparion, actually became smaller. While this presumably made them more vulnerable to predators, it would have enabled them to survive on a smaller amount of food, which could have advantages of its own. At the extreme, this resulted in Nannippus, a dwarf horse known from Canada to Mexico. This is estimated to have weighed just 40 kg (90 lbs) - similar to a German shepherd dog. That must have given it something of an edge, since, while all the other hipparionine horses died out at the end of the Miocene, it - just about - made it into the Pliocene, dying out about 3 million years later than its relatives.

A second group of horses, initially represented by Pliohippus, was undergoing a more radical evolutionary change at the time - or, at least, one that seems more significant from our modern perspective. While it's probable that the hipparionines couldn't use their side-toes for much, and they wouldn't have reached the ground unless the footing was particularly uneven, those of Pliohippus would barely have been visible in life at all. In due course, Pliohippus was replaced by the first horses that can accurately be described as "one-toed" - Astrohippus and Dinohippus. Both genera had also switched to a grassy diet, useful on the savannah of Late Miocene North America and, as it would turn out, even more so once the true prairies arrived.

In the absence of other candidates, it seems likely that one or the other of these must be the ancestor of today's horses. For much of the 20th century, Astrohippus was thought to be the more likely, although one theory from the 1950s suggested that it was only the ancestor of true horses and zebras, while the asses and donkeys had evolved from Dinohippus. On the basis of some features of the skull, however, neither of these theories is prevalent today, with Astrohippus being relegated to yet another side-branch in the long and complex history of the equids.

This doesn't necessarily mean that Dinohippus is the direct ancestor of modern horses either, because there's some dispute as to whether the most "modern-looking" species actually belongs to that genus at all, but that's more a matter of naming than of evolution, and, in any event, that transition would have occurred during the Pliocene. An observer in the Late Miocene would merely have noted that there were a few kinds of one-toed horse around that looked rather like the modern kind (barring, as always, some oddity of coat colour) and that were about the size of a small, but not Shetland-sized, pony.

[Drawing by Robert Horsfall. In the public domain.]
Posted by JK Revell at 15:54