In fact, brown hares seem to have originated somewhere around the Middle East, from which they first entered Europe by crossing the Bosporus when it was high and dry during the Ice Ages. The presence of ice sheets and tundra further north prevented them from spreading beyond the Balkans until the Ice Ages ended, but, once they did, their expansion was also greatly helped by the spread of early agriculture across the continent.

Today, in addition to the Middle East and Central Asia, brown hares are found across most of Europe, although they are still absent from Portugal, Norway, and most parts of Spain and Sweden, as well as many of the Mediterranean islands. Populations in southern Sweden, Northern Ireland, and Corsica are the result of recent historical introductions, and the animals have also been widely introduced across the Americas, and, not to allow rabbits all the blame, Australia.

The natural habitat of brown hares seems to be open woodland and mixed grassland, but they are very much associated with agricultural land, especially where it is used to grow crops rather than raise livestock. Despite this, the inevitable march of agricultural land across modern Europe has led to a decline in hare numbers in recent decades. This is because, much as they may love the ready availability of edible crops, they also need hedgerows and woodland in which to shelter, and the broad monoculture of modern farming provides a habitat that's too bland for the mixed diet of tasty weeds that they need.

Having said that, they can survive away from farmland, albeit at lower population densities. In South America, for instance, where they have no direct competitors, introduced hares have colonised coastal sand dunes, semi-desert, forest, and marshland, as well as the more obviously suitable pampas and woodland habitats. As a result, they have spread rapidly across the southern half of the continent.

Like rabbits, hares are nocturnal, being seen during daylight only in the summer, when the nights are not long enough for them to gather enough food. At least compared with the European rabbit, they are also antisocial, although they can tolerate one another in farms capable of supporting a high population density. Also unlike rabbits, they do not dig burrows, resting under vegetation cover, and venturing out at night to forage. Estimates for their home range vary enormously, probably because of differences between study sites, although somewhere between 20 and 190 hectares (50 to 470 acres) is common - either way, they are moving around a fair bit in search of food.

The breeding season lasts for over half the year from midwinter to late summer, although it reaches a peak around March when the males' testosterone levels are at their maximum. At this time, they gather around females in heat; if she's interested, she leads them on a chase to see who can catch her. If not, she'll fight them off, rearing up on her hind legs to box with her fore-paws. This vigorous courtship activity is widely set to be the origin of the phrase "March madness".

But, since breeding continues outside of March as well, females can give birth to several litters over the course of a year; individual litters rarely exceed five young, but most females do have around ten or eleven children in total each year. They are capable of "superfetation" - that is, conceiving a second litter while still pregnant with the first one so that both develop side-by-side in the womb - but this may not happen much in the wild, likely because the second litter will inevitably end up being born prematurely.

Whereas newborn rabbits are hairless and helpless, those of hares are born furred and reasonably active. They also grow very rapidly, which is something of a drain on the mother. Both features are likely due to the fact that they are born in a depression in the ground, rather than a nice sheltered burrow, and the sooner they are able to defend themselves the better.

The second species of hare found in Britain is the mountain hare (Lepus timidus). Genuine natives of the islands, mountain hares are smaller than the brown sort, although not as small as rabbits, but their most notable physical difference is that their fur turns pure white in winter - resulting in the alternative name of "variable hare". This, of course, is because they typically live further north than brown hares, and need camouflage against the snow at the relevant time of the year. While the timing of the change seems to depend on day length, and thus does not change from year to year, the shedding of the winter coat in the spring occurs more quickly in warm years than in cold ones.

It was once thought that mountain hares occurred across the entire Northern Hemisphere, but those in North America are now thought to be at least one, and probably two, different species. Even so, the 'true' mountain hare has a very wide range, being found throughout northern Asia and western Russia, as well as in the Alps, Scandinavia, the Baltic states, Scotland and Ireland. For the most part, they inhabit pine forests, but tundra and barren heathland are also suitable habitats. On the other hand, Ireland is neither of these; it's probably relevant that brown hares were not present on the island until the 19th century, and haven't spread terribly far since then, leaving the mountain hares with no obvious competitors.

Indeed, there is evidence that, given the opportunity, mountain hares eat much the same grassy foods as brown hares do, placing the two in direct competition where they overlap. However, the mountain hare's superior ability to withstand cold winters means that they can survive being pushed into chilly, relatively barren, environments, to feed off heather, twigs, and bark.

As one might expect, mountain hares typically have to travel much further in search of food than brown hares do. Home ranges average somewhere around 200 hectares (500 acres), and can be double this in some localities. Unlike brown hares, however, they can dig burrows for shelter, either in earth or snow, although they are more likely to use existing rocky crevices or similar cavities, and they don't have to use either. They are also slightly more sociable, sometimes feeding in small groups, and the young tend not to move far from home when they reach adulthood.

Although it does depend somewhat on the latitude and weather, in general, the breeding season is similar to that of brown hares. The mating habits are also similar, with the females leading favoured males on a chase (and mating with up to five of them) and boxing with those they aren't interested in. On average, however, they do tend to have fewer litters per year, probably because they don't have the resources to care for more.

Brown and mountain hares are capable of cross-breeding to produce fertile young, although this almost never happens in the wild, maintaining them as separate species. But "almost" is the key word here, as hybrids are known in Finland, where both species can be found. Furthermore, genetic analysis of brown hares from the Spanish Pyrenees has shown traces of mountain hare genes, indicating that they must have interbred in the past, when the Ice Ages pushed mountain hares much further south than they live today.

Hares represent one branch within the wider rabbit family, with over 30 species currently recognised. In general, they are larger than rabbits, with longer and more prominent ears, but are otherwise physically quite similar. Six of these species live in Europe, although none of the other four are particularly widespread. Iberian hares (L. granatensis) inhabit Spain and Portugal, while broom hares (L. castroviejoi) are found only in north-western Spain - like the brown hare, both have traces of mountain hare DNA in their genomes. Corsican hares (L. corsicanus) are a "threatened" species, now living only in southern Italy. While they are native to Sicily, ironically they are not native to Corsica, having only been introduced to the island in Renaissance times, and very nearly being wiped out there in the 1990s. 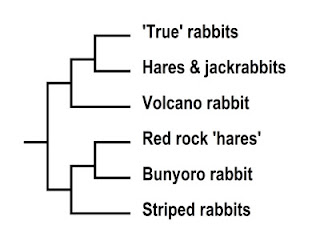 The remaining "European" species is the Cape hare (L. capensis), which lives in grassland and semi-desert across much of Africa and the Middle East... with one subspecies found only on Sardinia. The various other species of hare are found across Africa, Asia, and North America. Aside from one species each in Alaska and Canada/Greenland, however (these are the ones previously confused with the mountain hare), those in North America are not generally called "hares". Instead, the term used is "jackrabbit", apparently on account of ears that reminded early settlers of those of male donkeys (i.e. jackasses, in the original sense of the word). Apart from the continent they happen to live on, there is no real difference between jackrabbits and hares; they are local words for the same general type of animal.

However, while hares and jackrabbits do form a single group within the rabbit family, this does not mean that we can simply divide the family into "rabbits" and "hares". This is because some members of the family represent branches that split off from the 'true' rabbits before the true hares did. These include the four species of red rock hare living in rocky hills and gorges across southern Africa. They are called hares because they don't burrow (there being little point, where crevices are common) and have particularly large ears, but they are not true hares, and their young are probably hairless and blind like those of rabbits.

A couple of other species are difficult to place, each representing their own distinct branch. The Bunyoro rabbit lives only in central Africa, while the volcano rabbit is an endangered species now found only on the forested slopes of four volcanos in southern Mexico. The remaining species are the striped rabbits, about which relatively little is known. They are found in dense, often mountainous, forests in Laos, Vietnam, and Sumatra.

With that, I finally reach the end of the rodents and lagomorphs of the British Isles. But there are some other small mammals that are also worthy of examination, and it is to some of those that I will turn next...

[Photos by Hans-Jörg-Hellwig, from Wikimedia Commons, and www.volganet.ru. Cladogram adapted from Matthee et al. 2004.]
Posted by JK Revell at 13:46