A Hole of Your Own 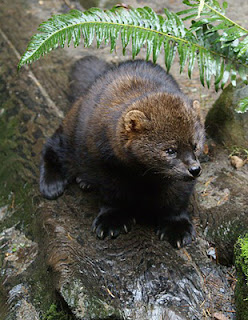 Many animals dig burrows for shelter, whether from the weather or from predators. In some cases these are complex or extensive burrow systems, such as we find with rabbits or gophers, and some animals, such as moles, try not to leave their burrows at all, adapting to a subterranean life. Most are much simpler than this, a basic hole in the ground in which the animal can rest securely at night - or during the day, as the case may be.

At the opposite extreme to the specialised diggers, however, are those animals that don't dig burrows at all, but still find it useful to seek shelter in this manner. These are creatures that will either use natural cavities or take over an abandoned burrow originally dug by something else. If they can't find one, it's usually not a disaster, although it may make life a little uncomfortable. But that's not necessarily true when it comes to time to breed.

If a burrow or den is useful at most times of the year, it's even more so when you are raising young, which often need particular protection. So some animals are what we might term "obligate secondary cavity breeders"... which means that cavities of some kind are essential if they want to breed and perpetuate their species, but they have little, if any, ability to make such cavities themselves.

Many of these animals are birds - tree swallows are an obvious example, and most parrots also fit this description. In fact, the issue is particularly important for parrots because so many of them are under threat - around 10% of all parrot species are formally listed as "endangered", and many more are considered vulnerable in some way or another. If we want to preserve parrots, then, one of the factors we need to consider in preserving their habitat is whether it has enough suitable nesting sites.

But it's not just birds; the same is also true for some species of mammal.

The fisher (Pekania pennanti) is a member of the weasel family that is nowadays found primarily in Canada and some northeastern parts of the US. When I previously described this animal, one of the things I said was that they "create no permanent dens, simply borrowing hollow trees or brush piles for a night or so at a time." As one might expect, this becomes particularly important at breeding time.

(I'll also note that, at the time, I used the scientific name Martes pennanti, which was still in common use. Since it is now clear that wolverines are more closely related to martens than fishers are, the latter have been given their own genus.)

While we can never say that something is completely safe, fishers, as a species, have no significant threats to their continued survival. However, in addition to the widespread northern populations, there are also a couple of smaller populations in California and southwestern Oregon. Fishers were once far more common in the USA, being found as far southeast as Tennessee and North Carolina, but they were heavily hunted for their pelts in the 19th and early 20th centuries. Even after California banned fisher trapping in the 1940s, habitat loss due to logging and coincidental natural disasters conspired to prevent their population rebounding, and, in fact, it continued to decline. There are now conservation efforts to help them survive in places such as Yosemite and the Olympic National Park in Washington.

But the fact is that we don't know an awful lot about how they raise their young. Much of what we do know has come from studies of the animals in captivity, where we can actually watch they're up to. What we can say is that fishers are born blind and helpless, with their eyes opening after around six weeks or so, by which time their milk teeth have begun to appear and they can start taking solid food. They grow rapidly after this, and start to explore the cage outside their nest box at around ten weeks; there is some evidence this is broadly true of dens in the wild, too.

These dens are located in hollows in trees, which may be either natural, due to decay or damage to the wood, or have been excavated by a previous occupant - most likely a pileated woodpecker, in this particular part of the world. The mother uses up to seven such dens over the course of rearing her young, with the first of these (i.e. the one in which she actually gives birth) seeing the most prolonged use.

Presumably, mothers pick the dens they are going to use on the basis of which will best protect their young during those crucial first weeks. This can be particularly important since, so far as we can tell, infant mortality is high among fishers at the best of times. Even in captivity, which about as safe an environment as one could wish for (if, perhaps, not ideal in other respects), around one in four fisher kits dies within seven days of birth. What that might equate to in the wild is unclear, but it's not a good baseline to be starting from.

So, if you're a mother fisher, what are you looking for when seeking your ideal home?

In general, fishers like to live in dense forests filled with snags and a good mixture of plant life and terrain. This provides them with a decent variety of animal prey as well as plenty of places to hide from their own predators, such as cougars and bobcats. This is no different when searching for places to use as birthing dens, since the mother needs to find food to keep her going through pregnancy and suckling her young and, of course, she also needs to survive when searching for it.

Such forests are going to tend to be older and more mature, with less logging or agricultural clearance than elsewhere. It's also likely to be the case that such forests will contain more trees with suitable resting places, in the form of partially rotten hollows in the wood or just snags in heavy undergrowth.

For the most part, it seems that the sorts of places mother fishers choose to raise their young are much the same as those that they will rest in during the day at other times of the year (they are primarily nocturnal). However, it does seem that are two additional things that they look out for when picking a birthing den and, to a lesser extent, any of the dens they use later on while still raising their kits.

Firstly, they seem rather more concerned than usual about picking dens that are warm and cosy. Fishers give birth in the early spring, and even in many parts of California (let alone Canada) the weather can be somewhat inclement at this time of year. Especially when raising very young kits, shelter from rain and cold can be particularly important, and, of course, the kits are going to be youngest at the earliest, coldest part of the season - late March in northern California. For this, the mother wants to seek out live trees, albeit large ones with enough decay to provide hollows.

There is, however, another feature of an ideal birthing den that might be less obvious: they tend to have smaller entrances. In fact, they tend to pick hollows with entrances so narrow that they can barely squeeze inside themselves. Obviously, this will help to protect against predators, but this may not entirely explain why birthing dens have smaller entrances than those they use at other times of the year.

Instead, it may be that predators aren't the only things that the mothers wish to keep out. Pregnancy in fishers, as with many other members of the weasel family, lasts almost exactly twelve months, with the embryos entering a sort of suspended animation for much of this period before implanting and developing. The upshot of this is that the mating and birthing seasons occur at roughly the same time. A female fisher is ready to mate about ten days after giving birth, well before her young are ready to leave the birthing nest.

By selecting birthing dens with narrow entrances, female fishers give themselves more of a choice when it comes to mates. That's because male fishers are notably bigger than the females, and if the female can only just get in herself... well, a male has no chance. Typically, the entrances to birthing dens are too large for a male fisher's head to fit through, so he's going to be stuck on the outside. If the female really isn't interested in him, he's probably out of luck.

The difficulty of finding hollows with such exacting requirements shows the amount of effort that pregnant fishers have to go through prior to giving birth. It's likely not a problem in the vast forests of Canada or, even perhaps, in places such as New England, but it may be more so in California, where forests can (among other things) be cleared back to reduce the undeniably real risk of summer fires. This may all be part of why fishers are still struggling there, despite recovering further north.

[Photo by US Fish & Wildlife Service, in the public domain.]
Posted by JK Revell at 14:48