How Sloths Turned Upside Down 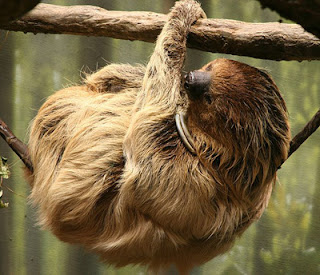 One of the things that sloths are noted for is spending a lot of time hanging upside down. This isn't, of course, something they literally spend their entire lives doing; they come down out of the trees to defecate, and they do sometimes travel over the ground - or swim across rivers - to move from one tree to another. They have also been observed, especially in zoos, casually sitting about in what we'd consider a fairly normal posture. But even so, being upside down is how they spend most of their time.

This is obviously pretty odd, from the perspective of a mammal (or, indeed, most other animals). You might think that what must have happened is that, at some point in the distant past, some ancestral tree sloth first headed up into the branches, decided to do so by hanging from them rather than by the more obvious method favoured by (say) primates, and that all of its descendants simply happened to do the same thing. In other words, it's a one-off quirk of evolution.

Except that can't be right.

You see, that makes perfect sense if you only consider the six species of living sloth, which do, indeed, all form a single evolutionary group. But it all falls apart when you look at the extinct ones. That's because of the ground sloths.

Over the course of the 35 million years or so that sloths have been in existence, far more species have been ground sloths than tree sloths. Indeed, the latter are a relatively recent innovation, probably dating back no more than 12 million years. That in itself shouldn't be an issue, if the tree sloths are just some side-branch of the larger sloth family tree. The problem is, they aren't: they are two, unrelated branches.

We have known this for a long time. Just recently, however, there has been a significant change in our understanding of exactly how they aren't related. We used to think that two-toed sloths had arisen from relatives of a couple of obscure ground-dwelling Caribbean species, and were also relatively close to the giant ground sloths such as Megalonyx. Three-toed sloths, on the other hand, appeared to be a very divergent branch whose ancestors split off long before the large ground sloths evolved, although quite how was unclear.

More recent evidence has shown that the picture is a lot more complicated than this, and that the two-toed sloth family (which included, among other things, the extinct Megalonyx) is actually three different groups of animal. Some of which are, in fact, related to the three-toed sloths. I'm not going into the fine details today, but I've included both old and new versions of the family tree below.

You'll note, however, that even in the all-new, revised version of the family tree, the two living kinds of sloth are not each other's closest relatives, and everything else lives on the ground. Which means, in short, that the habit of climbing trees while hanging upside down is something that evolved twice, and isn't just some random one-off event. Something, presumably, made it more likely that, when sloths did decide to enter the trees, they would independently evolve the same peculiar way of doing it.

To try and figure out what that something might be, the best place to look may well be the ground sloths. Was there something about how ground sloths lived that made their tree-dwelling descendants more likely to hang upside down than walk about normally, as the ground sloths themselves obviously did? One possibility, for instance, is how their shoulders were put together, since hanging from a tree branch is something that requires some unusual adaptations to the shoulder muscles.

Muscles don't survive in typical fossils, but, since they need to be attached to the underlying bones in particular ways, they don't really need to be. So what we might want to do is take a close look at the shoulder bones of ground sloths.

Two of the most common kinds of ground sloth fossil in North America belong to the genera Megalonyx and Paramylodon. Both lived across much of the continent from about 5 million years ago until the end of the Ice Ages, and both were huge animals, with the adults reaching as much as a ton in weight - about the same as a modern bison. The former was probably a browser, while the latter had a more mixed diet, which may explain why it is unusual to find one fossil site with both animals; the few exceptions tend to be forest edges or watering holes.

Significantly, these two animals belonged to different parts of the sloth family tree. Megalonyx is, as its name suggests, a megalonychid sloth, currently thought to be a relative of the modern three-toed species. Paramylodon, however, is a mylodont sloth, a probable relative of the two-toed sloths. Anything they had in common might, therefore, also have been true of the distant ancestors of both those animals.

Perhaps just as importantly, though, fossils of these two ground sloths are fairly common. Sufficiently so, in fact, that we have a good sample of both adult and infant skeletons. For instance, a number of juvenile Paramylodon are known from the Rancho La Brea tar pits, while what appears to be a family unit of Megalonyx, with two young, was discovered about ten years ago in a cave in Alabama.

So, what do we see when we do perform a detailed analysis of the shoulder blades of dozens of these fossils, and compare them both to rarer ground sloths, and to the shoulders of the living tree sloths?

Naturally, the greater size of the ground sloths also reflects in the shape of their bones, needing to support a greater weight and so on. But it turns out to be less so than one might expect, with the shoulders of the tree sloths reflecting their hanging lifestyle more than simply their smaller size - something confirmed by looking at some of the smaller fossil species.

For most of these smaller ground sloths, we don't have juvenile remains, but for the larger ones, we do, and here, the differences in shape between the shoulders of juvenile ground and tree sloths are much less than those in the adults, something that apparently can't be explained by size alone. The conclusion seems to be that the juvenile - but not adult - ground sloths were doing something that limited how much the shape of their shoulders could change.

Baby tree sloths cling, not to branches, but to their mothers. If the shoulders of baby ground sloths resembled those of their tree-dwelling modern kin, it's certainly plausible that they did the same. Perhaps all (or at least, most) prehistoric sloths did the same, spending the first few months of their lives clinging to their mother's fur. It may be worth noting here that the closest living relatives of sloths are the anteaters, and baby anteaters also cling to their mother's fur (albeit her back, not her underside, as sloths do) for as much of the time as possible. So this could be a deep evolutionary habit.

Obviously, we can't know exactly what happened here. But a possibility does present itself. Baby ground sloths clung to their mother's fur, hanging from her abdomen, just as baby tree sloths do today. Even once they became old enough not to need to do so, they may have sometimes needed to flee into trees to escape larger predators, a habit also seen in modern bear cubs. When some of them also began to spend more time in the trees as adults, they were already adapted to clinging onto things upside down from how they had spent their childhoods.

If all ground sloths shared this habit as infants, inherited from their deep evolutionary past along with the anteaters, then the same pressures and constraints would have applied on both occasions that ground sloths started to enter the trees. Or even three times, if we count the Caribbean ground sloths, which were really small and seem to have spent some time climbing, but died out before they could finish the job and become fully arboreal.

Living upside down might not seem so odd if you've done it since you were a baby.