The Curiosity of Lemmings 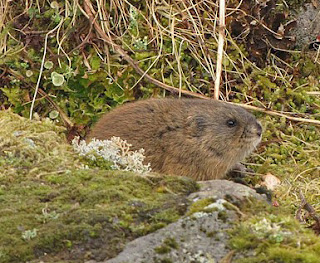 The reason that there are so many different animal species in the world is that they all have different living requirements; it's no secret that a tiger has different needs from a hedgehog. In most land-based habitats, we can look around and see a fair variety of mammal species and it's obvious that, while they may compete in other ways (by eating each other, for example), they can all survive because they are using their chosen habitat in different ways.

But, in some cases, it's quite hard to find more than a handful of species - especially if we're going to restrict ourselves to mammals, and ignore all the birds, insects, and so on. This is often true of city centres, for example, where you may not have much aside from rats, mice, and urban foxes. But in the wild, however, we are typically talking about particularly marginal habitats, such as deserts, high mountains and other desolate wastes.

Places don't get much more desolate than the north coast of Nunavut in Canada. Most of this region is too far north for, say, snowshoe hares or Canada lynx, let alone less obviously cold-adapted species. But even so, while we're hardly at the variety of American plains, there are such creatures as musk oxen, Arctic foxes, and Arctic hares, among others. (And this is ignoring the sea mammals, of course).

The animals I've just listed are quite obviously distinct from one another, eking out an existence by exploiting different aspects of what's there to be found. There's only one species of deer this far north, for instance - reindeer, because, yes, the climate is too barren for moose. Nunavut as a whole is home to eight different species of rodent (excluding sewer rats and house mice) but on its northern continental coast, there are just three; the Arctic ground squirrel and two kinds of lemming.

What exactly influences the size of the populations of these lemmings, is not entirely clear, even after decades of research. How two different species of such apparently similar animals manage to share such a barren landscape without one out-competing the other is even less so.

Lemmings are essentially just rather large voles. Depending on your exact definition, there are at least 17 species, all of which live in the Northern Hemisphere, typically (although not always) in the tundra regions of the far north, where the permanently frozen subsoil prevents the growth of trees. A number are native to northern Eurasia, but there are several in North America, too. Even among lemmings, however, few live this far north, and the two exceptions are the brown lemming (Lemmus trimucronatus) and the northern collared lemming (Dicrostonyx groenlandicus).

Both can be found across the far northern reaches of Canada and Alaska west of Hudson's Bay (a different species is found to the east) as well as on some of the islands beyond. The collared lemming, as its scientific name implies, is also found along the northern and northeastern coasts of Greenland, while the brown lemming inhabits the mountains of British Columbia and the extreme far east of Siberia. Nonetheless, in places from Nunavut to northern Alaska, both live side-by-side without apparent difficulty.

If one were to guess, one would expect that the collared lemmings would have the better time of it, having a physique more adapted to cold weather, paws that are effective as snow shovels, and a preference for food that grows in drier environments than the sedges and moss that the brown lemming prefers. The fact that they don't drive brown lemmings to extinction means that there must be something that the latter species has up its metaphorical sleeve that's useful at least some of time.

Since they live in the same area, have the same predators, one possible additional difference between the two is the way that they behave. For example, sometimes two species with similar diets can co-exist because one feeds during the day, and the other at night, exposing them to different risks and benefits. That's clearly not the case here, but there could be some more subtle difference.

What sort of subtle difference? One possibility is personality.

Pet owners will be aware that animals, like people, can have different personalities, with some being more outgoing, for example. This is, perhaps unsurprisingly, also true among wild mammals. And this can have measurable ecological effects. For example, bravery could be good or bad for your long-term survival, depending on how dangerous your environment happens to be at any given time. Most studies on the finer points of animal personality have looked at differences between individuals, but it's surely the case that even closely related species might also be different from one another.

And if two species have, say, the same predator, how they deal with that predator could be very important indeed.

If this gives one an advantage over the other, its population will expand at the expense of its rival... but if that advantage never lasts for long before something benefits the other one, it won't die out altogether and the relative populations can swing back the other way. Studies on lemming populations show that something of the sort is going on, but that doesn't mean that whatever gives one species a temporary edge is something behavioural rather than, say, how the weather changes from year to year.

By evaluating how individuals of the two species behave when placed in identical artificial environments, researchers have been able to show that there are dramatic differences between the two seemingly similar species. Since the settings used were artificial - essentially large boxes with a pipe that the animals could explore or not - it's hard to say how this reflects their natural behaviours. But the fact that they are so different shows that there's something going on.

Essentially, the brown lemmings were noticeably more active and inquisitive than the collared lemmings, showing much more curiosity about their unfamiliar surroundings. It's notable here that, when populations are low, brown lemmings retreat to grassy lowlands where the food is good, while collared lemmings hide out in rocky shrub-covered hummocks that make them harder to spot. That would fit with the brown lemmings being 'braver' than their collared counterparts, as well as their willingness to explore - they really need to know their escape routes ahead of time if something comes for them.

Having said which, bravery isn't such a simple thing. We also know, from studies in the wild that collared lemmings don't usually retreat when they are attacked, and are more willing to attack non-predatory intruders encroaching on their territory.

As the populations of the two species vary, each tactic for avoiding predators may prove beneficial in a different way. When brown lemmings are more numerous, their willingess to explore and venture into more risky environments to obtain food mean that more of them are eaten, so that the predators have less need to feed on the collared lemmings in the more secure, hidden locations. This allows the latter to move into open territory where they otherwise might not risk encountering brown lemmings. There, their usual reliance on not being seen by predators fails them, and more of them get eaten, flipping the balance in favour of their rivals.

The true story is likely more complex than this, with many other factors playing their part. But something so simple as a matter of personality, of bravery versus caution, may be enough to allow two otherwise similar species to co-exist even in a habitat that has little enough resources for one.

[Photo by Lauren Scope for the US Fish and Wildlife Service, in the public domain.]
Posted by JK Revell at 17:06