Digging in a Winter Wonderland 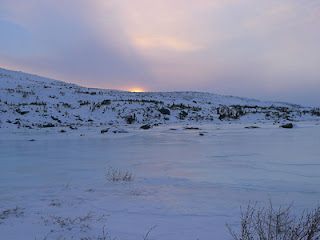 Humans have a somewhat ambivalent attitude to snow, greeting it either with joy and wonder or with concern and frustration, in large part depending on how old you happen to be. It decorates Christmas cards, covers the countryside in pristine white, and provides plentiful opportunities for play. On the other hand, it makes travel difficult, and may even interrupt deliveries of food, making our lives awkward. (Plus, if you're in a city, it may not stay white for very long).

If heavy snow makes it difficult for us to get around and obtain sustenance, the same obviously goes for animals that live in the relevant parts of the world. Different species have different strategies for how to cope with its arrival. Some hibernate, while others avoid the problem by migrating somewhere else for the winter, but there are, of course, a number of species that simply have to put up with it. Those that live particularly far north may even have to do so for over half the year, and the difficulty of doing this is probably at least part of the reason why relatively few species do.

Among the mammals that do live in the Arctic are the lemmings. Taxonomically speaking, lemmings are a particularly large kind of vole, but they share a lot in common beyond their mere size. The majority of species are adapted to cold, northern, environments with few, if any, trees. In many places, even bushes are rare, so that lemmings have no choice but to forage for food on the ground surface.

Which is a problem if the ground happens to be covered by a thick carpet of snow.

It's a problem, however, that lemmings seem to have adapted to deal with very effectively. Indeed, the population of lemmings in the summer is actually higher following winters with particularly deep snow cover, suggesting that, in some way, it's beneficial for them. This is probably because, in winter, lemmings dig tunnels in the snow, constructing burrows that can shelter them from the harsh wind and, perhaps more importantly, from predators. At least some species even breed and give birth beneath the snow, which could help explain any subsequent population boom.

But, while we may have a good idea why lemmings choose to live beneath the snow in winter, we know rather less about the fine details of how they do it. While there are a number of studies about the lives of burrowing animals in places such as deserts, there's almost nothing when it comes to burrowing in snow, rather than soil - presumably because not many animals do so.

Bylot Island is a large and inhospitable island in the Canadian Arctic; it's about the size of Yorkshire, or twice the size of Delaware, but has no permanent human settlements. A significant portion of the island is covered by permanent glaciers, but the more coastal regions consist of tundra, which remains snow-covered for about nine months of every year. In addition to a number of seabirds, the island is inhabited by two species of lemming.

Even by the standards of lemmings, these are adapted to particularly cold and snowy habitats. The North American brown lemming (Lemmus trimucronatus) lives in northern and western Canada, Alaska, and northeastern Siberia, and is, at Bylot Island, pretty much at the northern limit of its range. The northern collared lemming (Dicrostonyx groenlandicus) is, however, broadly in the middle of its range in terms of latitude, also living, apart from on some other nearby islands, on the northern coasts of western Canada, Alaska, and Greenland. By some definitions, it's not a "true" lemming, partly because its coat turns white in winter, which that of most lemmings does not, but it's a close relative, and its habits are similar enough for our purposes.

The two species can co-exist, even on an island with such limited resources, because they behave in a subtly different manner. Collared lemmings, for instance, have larger claws, and so are better at digging, and prefer drier habitats than brown lemmings do. Even their diet isn't quite identical, despite the restricted nature of the local cuisine; both species feed on grasses, sedges, and low-creeping Arctic shrubs during the winter, but the brown lemming also eats moss when it can find it.

But these differences are, in the grand scheme of things, relatively minor.

Over the last two years, researchers have been examining snow tunnels left by the lemmings on the island to try and fill in some of those gaps in our knowledge. Of course, it's not too easy to find the tunnels in the first place, but fortunately, it turns out that Arctic foxes are better at it than we are, digging into the snow in places where they can hear lemmings moving about underneath in the hope of getting a meal. Dig where they have, and, even if the lemming is no longer there, the tunnel should be.

What the researchers expected to find was that lemming tunnels would mostly run through the deepest parts of the snow, directly above the ground surface. That, after all, is where the plants that they want to eat are going to be. But, as it turns out, that wasn't the case at all.

In fact, of 33 different tunnels that they were able to excavate, only one had been dug at ground level. At least some of the others must have been constructed for breeding and shelter, since they led to nests lined with dead vegetation, on average a good 10 cm (4 inches) above the ground. But the others must have been used at least in part to search for food, despite the fact that the lemmings apparently saw no need to dig down to where the best chance of finding it would be.

(As an aside, it's hard to tell which tunnels were dug by which species, unless they happen to have left droppings in them, which weren't always possible to find. But, from the droppings the researchers did find, there seems little evidence that the two species share the same tunnels, and little difference between the two in terms of digging habits).

Closer examination of where and how the animals were digging provided an explanation for this seemingly odd behaviour, and it's all to do with what happens to snow as it piles up.

Thick packs of snow tend to build up three layers as they are deposited. At the bottom is an icy crust formed just as the snow was first deposited. When that happened, the temperature will often have been hovering about 0°c, so that a thin layer of snow was formed, but then briefly melted before re-freezing. At the top is a crunchy 'wind slab' layer, frozen by the cold air moving over it. What happens in between can be more complex, depending on the exact weather conditions at the time it was laid down, but in general, it's a light fluffy "depth hoar" which can act as something of an insulator.

And that turns out to be the key factor. It's much easier for a lemming to dig a tunnel in relatively soft snow than to try and burrow through a solid icy crust. The lemmings were, in short, putting in no more effort than they had to. Since the ground isn't perfectly flat, earthy hummocks and tussocks of vegetation will push some plant food up above the general ground level, so that they can at least find some of it. And, some of the time, they may not even have been looking for food; it's likely for instance that, since they breed in winter, some of the tunnels will have been dug by males on the search for partners, or perhaps young leaving home for the first time and looking for a place of their own.

Either way, the fact that it's easier to dig through soft snow some distance above the ground apparently outweighs the fact that there will be more food down where it's icier. And this could be relevant for conservation, since a warmer world in the future will likely mean thinner snow and, moreover, snow that includes more of that refrozen icy crust at the base that's so difficult for the lemmings to tunnel through.

It makes perfect sense in retrospect, but it wasn't what we'd thought... and that's the point of checking these things out.

[Photo by Nicolas M. Perrault, from Wikimedia Commons.]
Posted by JK Revell at 15:25