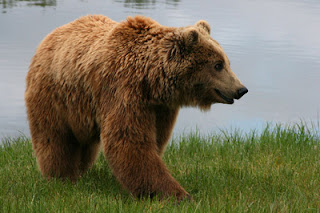 But, for the purposes of this post, I'm going to call it "hibernation", not least because it being close enough to count seems to be the scientific consensus today.

This is achieved because the bear's metabolism is slowing down drastically to conserve energy. In the case of brown bears, heart rate slows to one-third of its normal waking rate, or half what it would be during regular sleep, and it's even more extreme among black bears. Over the course of the winter, a grizzly bear can lose anything up to 40% of its body weight. And it isn't just eating that they're missing out on; if you've ever felt compelled to get out of bed because you need a pee, consider that hibernating bears go without a toilet break for literally months on end.

But it's no good simply going for a kip out in the open and hoping to wake up safe and sound in the spring. This is doubly so for females, which give birth while they're hibernating and need some sort of protection for their cubs. In fact, bears give birth to exceptionally small young, compared with their adult size. An adult female brown bear, for instance, weighs around 150 kg (330 lbs), while a newborn cub often weighs less than 500 g (18 oz.)... and, like newborn kittens and puppies, is blind.

So, clearly, a bear needs somewhere nice and safe to den for the winter, and the safer the better. This is even true for polar bears, which obviously don't hibernate but do give birth in concealed dens... indeed, they evolved from hibernating bears only relatively recently, as reflected in some aspects of their biochemistry.

There are eight species of bear alive today, and only three of them hibernate. Of these, the largest is the brown bear (Ursus arctos), which includes the grizzly bear as one of its many subspecies. Naturally, they require particularly large dens in which to shelter for the winter, and, like those of the other hibernating bear species, these have a particular structure.

The bedding chamber itself may be a natural cave or other hollow, or it may be excavated from the earth, often under a dead or living tree. The floor is usually lined with leaves, grass, or other materials in order to make it comfortable, and, if possible, the chamber is accessed through a short tunnel from the entrance. In front of the entrance is an area called, appropriately enough, the "porch", often consisting of a platform constructed from the soil removed when digging out the chamber. Bears have sometimes been reported to make a grassy sunbed on the porch for use in fine weather, although this is probably not common.

Picking the right location for your den, though, is an important matter. The last thing a bear wants to do is have to abandon their den partway through the winter, especially if they have cubs to look after, since the latter may well not survive the experience. Reasons why a bear might nonetheless be forced to do so include the possibility of collapse or even of flooding, perhaps once the snows start to melt in spring.

While bears obviously aren't planning ahead in the same way that a human might, there are still a number of factors they'll need to take account of when deciding whether a particular site is suitable for constructing a den. On the larger scale, they're going to start out by looking for a general area where they have good reason to suppose there will be plenty of food available in the spring when they wake up. For instance, in Alberta, it's been shown that grizzly bears select dens in areas with dense stands of conifers, where food will be plentiful both before and after they hibernate, as well as avoiding low-lying wetlands, with their attendant flood risk.

Once they've picked the general area to start looking in, they need to pick the best specific site for the den itself. Steep slopes are a good start, since that's another way of avoiding floods, but other factors include the presence of vegetation that might hide the entrance and of ground containing large boulders or thick tree roots that can help to hold up the roof. Caves are obviously even better, but those are often in short supply, so it depends where the bear lives. There's also evidence that mountain-denning bears that can't find a cave dig dens with smaller entrances than they do in the lowlands, presumably because it's warmer that way.

Most studies of where brown bears construct their dens, and suggestions for how we can best minimise any risk to them from our own activities, have been conducted on grizzlies (U. a. horribilis). These are one of the most widespread and common subspecies, being the typical one found in mainland North America. They were once found across almost the entire west of that continent, but today are restricted to Alaska, western Canada, and some neighbouring parts of the contiguous US (such as Yellowstone).

The thing about this area is that, by the standards of much of the world, it's not very densely populated. Which is great news for the bears, and likely explains why they're still there, but arguably means that conservation of the subspecies is a less urgent issue than for those bears living in more populated areas. The other major subspecies (there are many 'minor' ones, mostly on islands) is the Eurasian brown bear (U. a. acrtos), which has its largest population in Siberia - again, not a very densely settled area.

But Eurasian brown bears also live in Europe, where the human population density is much higher than anywhere grizzlies still live. Other than Russia, the European country with the most brown bears turns out to be Romania, with anything from 6,000 to 8,000 adult bears, compared with a total population of around 33,000 for grizzlies in the Americas.

A recent survey of bear dens in Transylvania on the edge of the Carpathian Mountains concluded that here, by far the most important factor for the bears is how rugged the terrain that they dig their dens in is. While they didn't specifically avoid areas near roads, as one might expect, it's still the case that rugged terrain is less visited by humans during the winter than more accessible places might be. So its likely that, here, the bears are avoiding human contact. Rugged terrain may also make it easier to find caves or to conceal the entrances to constructed dens, both of which would help from the bears' point of view.

The reason that we might want to know the areas in which we might find bears sleeping in winter is that it then becomes easier for us to avoid those areas, at least during the relevant time of year. That would help protect the bears, reducing the chance that they'll be disturbed, forcing them to abandon their den and perhaps lose their cubs in the process.

Plus, it has to be said... do you really want to be walking about somewhere that you might accidentally wake up and really annoy a 200 kg bear?