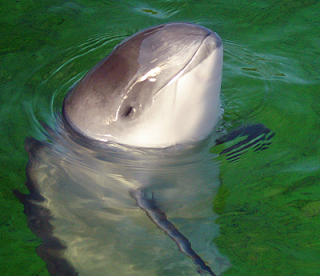 It wasn't until the 1990s that we fully began to get a handle on exactly how those sounds are made in the first place. It turns out (and we had to stick an endoscopic camera down a porpoise's blowhole to prove this, which probably explains why it took so long) that the inner surface of the nasal cavity is lined with a number of folds, now called phonic lips, which vibrate as the clicking sound is produced. Together with a pair of fat bodies nearby, these act like rather like vocal cords - but inside the nose instead of down in the throat. It has since been shown that a similar arrangement exists in most other whales and dolphins.

Sperm whales have a slightly different system, but in most of the smaller species, the mechanism by which they make their sonar clicks is fairly similar. The animal breathes out air from its lungs, passing it up into the nasal passage, where it vibrates the phonic lips, and generates the sound. The air then passes up into the sacs, which are closer to the blowhole, and inflates them. The animal then breathes back in again, and the air passes back down into the lungs. The advantage of this method, and the purpose of the sacs, is that at no point does the animal have to open the blowhole - it can do all this while holding its breath.

The vibration of the phonic folds also vibrates the small fatty bodies ("dorsal bursae") nearby, which probably amplifies the sound. However, since all of these structures are still surrounded by the muffling tissues of the rest of the creature's body, it still has to get out. This it does by passing into a much larger fatty structure, the melon, which sits on top of the forehead, and is shaped so as to focus the sound and project it forwards. Most of this is also covered by dense connective tissue, but in one oval-shaped patch near the front, it is not, creating a skin-covered "window" that further directs the sound to create the tight sonar beam.

In the majority of dolphin and whale species, the click produced by this mechanism has a wide-band pattern. It's very short (typically 1/20th of a second) and loud, but has a wide range of different frequencies, albeit all of them too high for humans to hear. This, as it turns out, is good for transmitting sound for a long distance through water.

Porpoises, the animals that kicked off much of this study on acoustics, are, however, a different matter. The clicks they make are narrow-band and high frequency. They are quieter, longer, and crucially, are a relatively pure, high-pitched tone. This might help the sonar distinguish smaller objects, but the range is going to be much shorter, so it's perhaps not surprising that most cetaceans don't make sounds this way.

But the question is, why do any? Because it turns out that it's not just porpoises; some species of dolphin also have this unusual modification. One possibility is that it might have something to do with the unusual shape of porpoise skulls, which are different from those of dolphins, and perhaps prevent them from making the seemingly more useful wide-band calls.

But it turns out that that's not it. A detailed analysis of cetacean skulls shows that the part of the skull that would affect the sound production isn't different between these species, even if the rest is. If there's something going on anatomically that distinguishes the two types, it has to be somewhere in the soft tissue, not the bone.

And we know rather less about that.

A recent review of the head anatomy of 32 different species of cetacean does give a few pointers as to what might be causing the difference, but not very many. For instance, the white-sided and white-beaked dolphins, both in the genus Lagenorhynchus, have an unusual, peanut-shaped, melon and it has been suggested that differentials in the resonance frequencies of the two lobes might affect the kind of sounds they can make. Both species make typical, wide-band, clicks, but their close relatives, the Peale's and hourglass dolphins, make the narrow-band sort, giving us the perfect opportunity to see if there's any difference in the structure of their melons.

But we don't know, because nobody has done that particular anatomical study. And even if we had, it may well turn out that the two narrow-band species aren't that closely related to the wide-band ones after all.

Another suggestion relates to the fact that porpoises have an unusual capsule of tough connective tissue around the sound-producing organs. The new review confirmed that, yes, this is indeed a unique feature of porpoises, found in every species that has so far been examined. The problem is, it's too unique, since it isn't found in any of the narrow-band dolphins either. So, yes, maybe it helps, but even if it does (which we don't know), it's clearly not essential.

Perhaps a more useful clue might be found in the shape of the air sacs that I mentioned back at the beginning of this post. In porpoises, these have an unusual structure where the underside of the sack is shaped into numerous folds. It turns out that this isn't seen in any wide-band cetaceans that have been examined, but it is seen in the melon-headed "whale" (Poponocephala electra) - a narrow-band dolphin species.

It's also seen in both pygmy and dwarf sperm whales (Kogia spp.) which, unlike true sperm whales, also use narrow-band signals. They really are whales, not dolphins (insofar as "whale" is a meaningful concept taxonomically) and there are some other anatomical differences around their blowholes, but this is suggestive. Lest we get too excited, though, the feature is not found in some other narrow-band dolphin species, such as Commerson's dolphin (Cephalorhyncus commersonii).

Plus, we don't actually know why this would make any difference to the sound produced. But it's at least a possibility to look into further.

But, if the "how" remains a mystery, we do have some better ideas about the "why". Firstly, there may well be an advantage in the ability of short-range high-pitched sonar pings to pick out fine detail from the background, especially in noisy environments. Another possibility, however, is suggested by the fact that the majority of narrow-band species are relatively small cetaceans, often living in smaller groups than their wide-band relatives.

That could be significant because the pitch that they use is simply too high for a killer whale to hear. That provides an obvious advantage for animals that are so often part of a killer whale's prey - and killer whales are found virtually everywhere. The two explanations are not mutually exclusive, and it's notable that killer whales probably aren't much of a threat to pygmy and dwarf sperm whales.

There's also pretty good evidence that narrow-band sonar must have evolved in porpoises long before the present species of killer whale (Orcinus orca) even existed. But that assumes that nothing else similar existed in the past. Surely early porpoises would have been just as keen to hide from such large predatory whales as Livyatan or Acrophyseter?

Sometimes, it may just be better to keep your voice down.