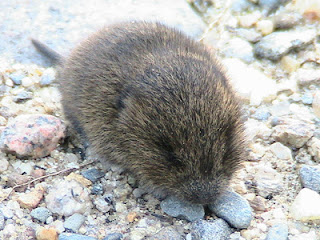 Here, the principle is that a single female can only have one litter of children at a time, but a single male can have multiple partners, all of whom are simultaneously pregnant. So long as he doesn't have to be involved with rearing them, he can instead concentrate on making himself as physically attractive as possible, and strong enough to deter any potential rivals. Thus, in many mammal species, the male is larger than the female, and this is especially true in the most strongly polygynous species, such as deer and seals.

All of which generally works... until the dominant male dies or is otherwise ousted. The new dominant male also wants as many of his own children as possible, and that's a problem if his harem is still rearing the children of his predecessor. The moral solution would be to wait until they are adults and hope that their mother is still attracted to you at that point... but, obviously, we're dealing with wild animals here. So, in many cases, what actually happens is infanticide (although there can be other explanations for this seemingly counter-productive behaviour).

That's bad news, not only for the infants, but also for the mother, so it's unsurprising that many mammals have evolved ways to minimise it. One possibility, assuming that it's not already too late, is for a pregnant female in this situation just... not to give birth.

This is commonly referred to as the Bruce effect.

This not named for some hypothetical murderous man named "Bruce". Or, indeed, for a man at all.

It all dates back to a paper published in Nature in 1959, written by zoologist Hilda Bruce. She had been researching the Whitten effect, itself identified only in 1956, whereby female mice all come into heat together when exposed to a male. The extra step that Bruce took was to see what happens when the females in question are already pregnant. It turned out that, almost half the time, their original pregnancy terminated, then they mated with the new male and got pregnant again.

Since house mice are territorial, the reasoning went, it made sense for the females to do this rather than waste time and energy completing a pregnancy to give birth to a child that the presumed new dominant male in their neighbourhood was likely to kill. In fact, this effect was strong enough that the new male didn't even need to be present - just smelling his urine in their cage was enough to end a pregnancy sired by a different male.

Over the decades since, the term "Bruce effect" has come to be more broadly defined, often referring more generally to any termination of pregnancy caused by the presence of an unfamiliar male, regardless of the exact mechanism. Or, in extreme cases, to pretty much any termination of pregnancy that occurs when the broader environment is unfavourable.

Whether this broadening of the term beyond the very specific meaning it originally had is a good thing or inaccurate and unhelpful is a matter of debate. I'm not going to get into that, but it's worth looking at how this effect actually works.

As originally described, the Bruce effect refers to the termination of pregnancy at a very early stage following exposure of female mice to the scent (and usually also the presence) of an unfamiliar male. This was originally thought to be triggered solely by pheromones, but other proteins or hormones may also play a role, particularly with regard to proving that the male in question really is unknown to the female. Exposure to these substances triggers a specific neurochemical pathway that shuts down the production of progesterone by the corpus luteum.

High progesterone levels are essential for the uterus to maintain the thick lining to which the embryo will attach, so this process can't happen and the embryo - still a microscopic ball of cells at this point - dies without developing further. Crucially, if the pregnancy has got any further than that, the mechanism isn't triggered, although there may be some effect on the volume of milk production by the mother. Originally described in laboratory mice (and, by implication, in house mice in general) this has since been observed in many other rodent species, including rats, voles, deer mice, and lemmings.

Outside of rodents, domestic dogs seem to show something similar, but with an added twist. The same basic thing seems to happen... but it's less common if, after mating with an unfamiliar male, the mother returns to a male she is familiar with, but who isn't really the father. In this case, she has to be physically with him, not just able to see him, so, presumably, this has something to do with her chances of tricking him into thinking that the pups are his ("hey, I wasn't away for that long!").

Another difference between dogs and mice is that the former can also terminate their pregnancies at a later stage. This has also been observed in a number of vole species, and in both zebras and baboons. In at least some cases, this doesn't appear to be due to pheromones, so there's obviously a different mechanism involved... although quite what it might be is unclear. It probably involves physical proximity, and one possibility could simply be stress, which is known to affect pregnancy, even in humans.

Fortunately, some species have evolved ways for the female to avoid all of this. If, as seems to be the case with the dogs mentioned above, you can trick the dominant male into thinking that the children might be is, then there's no risk of him attacking them and no need to worry about completing your pregnancy. One way to do this is to adopt one of the two alternatives to monogamy and polygyny: polyandry and promiscuity. Here, the female has sex with lots of different males and there's nothing much they can do to stop her. So any children might be his, or they might not, and he has no way of knowing which are which.

A similar technique, which works even with polygynous species, is to mate with the dominant male even after you've already got pregnant by someone else. Water voles are known to do this, and there are likely many other examples among other species, since the whole point is that it would be hard to know for sure that that's what's happening.

We are fortunate that, as humans and moral beings, other options are open to us. Indeed, both adoption and looking after children from a partner's previous marriage are common phenomena in our culture. Other mammals don't always have that luxury.