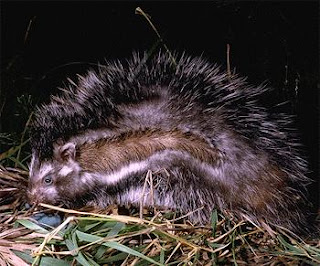 In between these two events, though, something else happened. That's because there is one species in the mouse family that doesn't fit within any of those three lineages. It diverged from the common ancestor of the gerbils and deomyines around 17 million years ago, and it's sufficiently odd that it had been given a subfamily all to itself pretty much since it was first described in the mid 19th century.

This is the crested rat (Lophiomys imhausi), sometimes instead called the "maned rat". It lives in wooded areas in East Africa, from southern Sudan in the north to Kenya in the south. It's certainly a distinctive looking animal, measuring around 36 cm (14 inches) in length, not counting the tail, and with a long crest of black-and-white fur down its back and stripes down its flanks. These, like the stripes on a skunk, are a warning to predators to stay clear.

Because the crested rat is poisonous.

That much has been known for a long time. Although observations of it being attacked in the wild are rare (presumably because most local predators know better than to try), there are records of what happens when a domestic dog tries to attack it. The rat fluffs up its crest of fur, making itself as obvious as possible and also exposing fur that, under the microscope, has a strange spongy texture that makes it extra absorbent. If that gets near the dog's mouth, the dog may actually die - and it certainly won't try it again if it survives.

Clearly there's something soaked into those hairs that's deadly poison, but it was only about ten years ago that we confirmed what it was. (Hey, it's an obscure African rodent; it's not as if there have been many studies on it). It turns out that the rats chew on the bark and roots of the African poison arrow tree and then smear their saliva over the modified hairs on their bodies. As a result, these become impregnated with a chemical called ouabain which, as you might expect from the name of the tree, is also used by some local African tribes to coat their arrows.

In fact, ouabain is chemically related to digoxin, the better-known (to westerners) poison found in foxgloves. Like that compound, it affects the functioning of the heart, leading to arrhythmia, often accompanied by nausea and vomiting. Although nobody has ever tested crested rats specifically, many other related species of rodent are known to be highly resistant to this general type of poison, which would explain why it doesn't kill itself in the process of applying the substance. (On the other hand, some birds may be resistant too, and crested rat remains have been found in owl pellets).

The studies that showed how the crested rat makes itself poisonous were, however, conducted on animals in captivity. Not much is known about how the animal lives in the wild, which means we also don't know much about how, say, changes in local land use might affect it - it is, after all, evolutionarily distinct from all other murid rodents. And, while it used to live across much of East Africa, and isn't really endangered, today it's largely restricted to four patches of territory and therefore clearly isn't immune to a changing world.

A few weeks ago, however, a study was published that took a deeper look at the lives of these unusual animals. It included setting camera traps across the slopes of Mount Kenya to catch images of the animals in the wild, and used live traps to capture and then release individuals after examining them (while wearing leather gloves...), as well as observing some in captivity.

The camera traps managed to take over 3,000 photographs of passing wildlife, just four of which happened to include a maned rat. This might suggest that they don't exactly have a high population density in the area, although the fact that the same study managed to capture quite a few in the live traps might imply otherwise. It's possible, for instance, that the thick fur of the animals makes them difficult for the IR sensors that trigger the cameras to spot. Still, the fact that all four photos were taken at night supports the observation from captive individuals that crested rats are strongly nocturnal.

The live trapping was perhaps more informative. Crested rats had previously been thought to be antisocial, leading largely solitary lives. Notably, when one adult animal was captured in a trap, another adult of the opposite sex was often captured nearby on the same night. That suggests, at the very least, that they aren't territorial. But, when a pair of animals trapped in this way were placed in the same shelter, even outside of the breeding season, they made purring noises, groomed each other, and cuddled up together in the nest box.

So they clearly aren't that antisocial and there's a strong implication that they frequently live in monogamous pairs. This is not the usual pattern for mammals, but it isn't exceptionally rare either, being most common when it takes a lot of effort to look after the young, so that the work is best shared between both parents. While the details still aren't known, other evidence suggested that young crested rats do spend longer with their parents than we'd expect for a rodent, perhaps because it takes them a while to grow to their comparitvely large size (they can live for up to seven years in captivity, which is good for a rodent). So that fits, then.

The researchers also tried offering them both material from the poison arrow tree and a similarly poisonous species of milkweed. They were happy to eat both and never suffered any visible effects, so they're clearly immune to the poison. It remains unclear whether that's due to some modification in their heart biochemistry, digestive enzymes that destroy the stuff, or perhaps specialised gut bacteria that break it down for them - all of which have been suggested.

On the other hand, they didn't often annoint themselves with the poison from the tree bark, and didn't try to use the milkweed for this purpose at all. They might not be familiar with the latter, and it's known that the toxin from the former can last for years on an arrow head so it's not something they may need to use very often.

But, if they're monogamous, leading more complex lives than we previously thought, it seems that their relationships, at least, are not toxic.