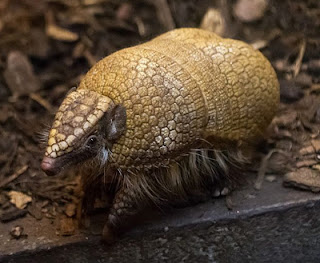 Among these are the armadillos. Armadillos are rather strange creatures, and there has been a fair amount of study conducted on their general biology, especially on the nine-banded species common in parts of the US - and most of that is related to their ability to carry leprosy. But when it comes to individual species living solely in South America, information on such things as ecology and social behaviour is limited and largely based on captive animals in zoos.

And that's generally the most useful sort of information when it comes to matters such as conservation. Five out of the 20 widely recognised species (as always, the exact number of species is up for debate) are so poorly known that we can't even say whether or not they might be endangered... an unusually high proportion for a mammal group. A large part of the reason for this is that most armadillo species tend to spend most of their time in their burrows, where you can't see them, and some don't like to surface at all if they can possibly help it. When they do, it's mostly at night, and they don't seem to be terribly sociable when they do.

This brings me to the southern three-banded armadillo (Tolypeutes matacus). One of two species of three-banded armadillo, this is a comparatively small animal that lives in dry forest and scrubland in northern Argentina, western Paraguay, eastern Bolivia, and the Pantanal region of Brazil. Three-banded armadillos are best known for having bodies sufficiently flexible that they can curl themselves up into a smooth armoured ball. This is great for deterring predators, but unfortunately not much use against humans, who can simply pick them up or use other means to dispatch them once they've helpfully immobilised themselves.

To be fair, this animal is far from a complete mystery, and it isn't one of the ones whose conservation status remains unknown. Indeed, it has probably been studied more than its northern counterpart, which inhabits eastern Brazil south of the Amazon. Still, we know relatively little about its behaviour in the wild, and there are some reasons to suppose that it isn't entirely typical of armadillos. Unlike the much larger nine-banded species, for instance, it is thought to feed almost entirely on ants, rather than being more generalist in its diet.

To attempt to find out more about how animals in this species live their lives, and whether this could have any bearing on conservation, a recent study surveyed armadillos living in the Brazilian Pantanal. This is a vast region of regularly flooded wetland on the Paraguay River - with an area of at least 140,000 km2 (55,000 square miles) it's the largest tropical wetland in the world.

To assess what they were up to, researchers captured a number of the animals and glued VHF radios and GPS trackers to the armour on their hindquarters - anywhere else and the animals would have difficulty rolling up into a ball, which it's fair to say would have hindered their normal behaviour. For comparison, the devices weighed around 50g, on an animal that weighs a little over 1 kg on average, so, while the armadillos presumably noticed they were there, they shouldn't have been too much of an inconvenience, and they were removed again at the end of the month-long study without any evidence of harm having been caused in the interim.

Perhaps the most straightforward thing that the study confirmed was that the armadillos are nocturnal. This already strongly suspected, but some previous reports had indicated that they were active during the day. It turns out that that's probably because they do come out in daylight occasionally, and that's the only time people had been looking.

More importantly, though, the animals moved around at the same time of day in two very different locations: one that was that was almost entirely wild wetlands, and another partly given over to cattle ranching and managed teak forestry. The reason that that's significant is that many mammals that are normally either diurnal or crepuscular switch to a more nocturnal lifestyle when humans are around in order to avoid them. In this case, though, that's apparently not so; they just prefer the night.

Studies of this kind can also tell us how creatures move around, and this can give us quite a few insights into their behaviour in other respects. For instance, in this case, it appears that three-banded armadillos spend about 80% of their time hiding out in their burrows, which seems a lot, but is, if anything, at the lower end for armadillos in general.

Furthermore, we can also look at the home range of the animal; the area of territory through which it habitually moves. Obviously, the first question to ask is here is 'how large is it?'. That may well vary with the habitat in which it lives, and it could be that waterlogged wetlands lead to different behaviour than the drier scrub where the animal lives elsewhere in its range. Nonetheless, the figure in this study turned out to be, on average, 90 hectares (220 acres), which is rather a lot for something that's only a quarter the weight of the average cat.

In fact, it's huge compared with the typical home range of nine or six-banded armadillos. On the other hand, it's smaller than that recorded for the southern naked-tailed armadillo, which is much more closely related to the three-banded sort than the nine-banded one is, and, moreover, has a similar, ant-based diet. So it's likely that the animals simply have to travel further to find suitable food to eat, when they're fairly picky about what it is.

But the other thing we can tell from looking at the home range of individual animals is whether or not they overlap with one another. And that can tell us, not only whether they're likely to be territorial, but also give us insights into their mating system. In this case, it turns out that the home ranges of females don't overlap, but those of males do. In order to manage this, the males travel further from their burrows than females do, presumably driven by something more than the desire for food alone.

Specifically, while this means that the ranges of males do overlap with each other as well, each one overlaps with that of anywhere from two to six neighbouring females. That implies that males mate, when they get the chance, with multiple females, but it's not quite as simple as that. That's because, since the two sexes are about equally abundant, if the males venture into the territory of multiple females, it logically follows that each female must also have multiple visiting males to pick from.

That's not the sort of thing we can tell from this study. It was apparent that armadillos did not share their burrows with one another, apart from females with their young and sometimes with juvenile non-breeding males - presumably older sons that hadn't left home yet. The females captured in the study didn't show any pattern as to which months of the year they appeared fertile, so presumably, there's no defined mating season... which again, means that the males have to travel further in the hope of finding a female who happens to be receptive at any given time. But this doesn't tell us what she's up to.

One hint may come from the fact that males of this species are larger than females. That's usually a sign that the males are competing with each other in some way and we therefore likely have a polygynous mating system, where a few dominant males get all the mates, as we do with nine-banded armadillos. Larger males also tended to travel further, presumably because they're physically fitter as well as needing more food, giving them more opportunity to gather mates. But this isn't conclusive, and the screaming hairy armadillo (yes, that's its official name), for instance, is known to have a more egalitarian mating system where both sexes have multiple partners, so this remains a possibility.

The southern three-banded armadillo is not internationally listed as a threatened species, although its northern counterpart is. However, that refers to its population across the whole of its range, and even that is declining, due to the loss of its habitat to expanding agricultural land. In the Pantanal, however, its status is far less clear, and understanding how these animals move about, interact with one another, and use their environment may help with their conservation in the longer term.