Churning out babies - pregnancy in the naked mole rat 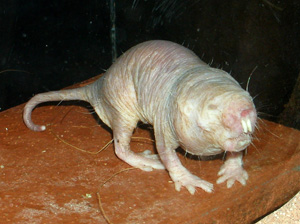 By any standards, the naked mole rat (Heterocephalus glaber) has to be among the strangest of the placental mammals - and, to be honest, also one of the ugliest. It spends virtually its entire life underground, is hairless, apparently can't do the decent mammalian thing and control it's own body temperature, and may well be entirely blind. Perhaps even stranger, though, is its method of reproduction.

Remember the brown antechinus? Well, this is almost the exact opposite.

The mole rat family is itself a fairly strange group of animals, and actually more related to guinea pigs than they are to rats. The naked mole rat is almost certainly the best known member of the group, but there are several not-naked mole rats as well (I plan to discuss these in another post, coming up soon). In evolutionary terms, the naked species lies outside the main group, having diverged long before they did, and it's often given its own subfamily to highlight the differences between it and its furry kin.


The naked mole rat lives in huge underground colonies, with anything up to 300 members, although around 80 is more common. What's particularly strange is that, out of all of the rats in the colony, only one of the females breeds. This, of course, is a pattern we often see in insects, with bees, ants, and termites all being good examples. In those insects, we have a single queen that lays all the eggs, tended to by hordes of sterile workers and a small number of reproductive males. Mammals don't work like that... but the naked mole rat comes remarkably close.

Just as with bees, all the breeding in a naked mole rat colony is performed by a single queen, and a slightly larger number of males. That the other males don't get a look in isn't so unusual; they have to wait until the dominant males die off, as happens with many other species of mammal. It's the fact that the other females don't reproduce, and are, effectively, sterile workers, that makes the naked mole rat so unusual. (Not absolutely unique, though, since at least one other mole rat species seems to do the same - it just hasn't been studied so thoroughly yet).

There are differences between naked mole rats and insects, of course. Most notably, the workers in insect colonies are permanently sterile, and completely incapable of breeding - the queen is born to her status. Among naked mole rats that isn't true, and any female can leave the colony to found her own, becoming fertile in the process. The same happens when an existing queen dies off, often after some vicious fighting between her potential replacements. Nonetheless, once fertile, the queen's appearance changes from that of her siblings. Her ovaries and uterus greatly enlarge as her body floods with the female hormone progesterone, and her back actually lengthens to accommodate her eventual pregnancy.

Pregnancy in naked mole rats is unusually long. It lasts 70 days, which may not sound like much, but is at least twice what you would expect compared with other rodents of similar size - they only weigh around 30 to 35 grams (just over one ounce). Small rodents generally breed rapidly, producing as many litters as possible in a short time, not least to compensate for the fact that a lot of them are going to get eaten. So why not this one? A recent study by Kathleen Roellig et al. may shed at least some light on what's going on.

The researchers established a captive colony of naked mole rats, and monitored the pregnancies of the queen, using ultrasound equipment much the same as that used for human pregnancies - albeit somewhat smaller. There are a couple of ways that mammals can extend their apparent period of pregnancy. Some, such as the silver-tipped myotis, seem to be able to store sperm in their reproductive tracts for a few months until the time is right to have children.

More common is delayed implantation, in which the egg is fertilised as normal, but, after dividing into a tiny ball of cells, then suddenly stops its development, and does nothing for a few months. Eventually, it attaches itself to the uterine wall, and begins to grow and develop again. This is especially useful to animals such as seals. Seals only come ashore to breed and give birth once a year, so their pregnancy has to last just under 12 months. Since it wouldn't take that long for a properly growing embryo to develop into a seal pup (seals, are, after all, not far off the size of a human) its obviously useful for that to be prolonged somehow. And, of course, it means they don't spend their entire adult life feeling the symptoms of pregnancy.

No such luck for the naked mole rat, though. In this study, once she'd settled down into the new colony, the queen rarely waited more than a couple of weeks after giving birth before getting pregnant again. The ultrasound showed that there was a delay in the womb, with implantation probably not happening until around the end of the second week, but that's not long enough to explain the whole of the longer pregnancy. From then on, the embryos kept growing.

We're talking quite a lot of embryos, too. On average, the queen gave birth to around eleven pups at a time, which is plenty, even for a rodent. But even that isn't really the full extent of her alteration into a baby-making machine. The first ultrasound scans were given at about 20 days, and, at that point, she had an average of just over thirteen embryos. On average, a couple of them died and disappeared before birth - assuming, of course, that none had already gone by 20 days. It's at least possible that this has something to do with being in captivity, but it might also be that naked mole rat queens can control the size of their litter. It could even be a bit of both - a tunnel system in a lab would naturally have a limited size, so having too many young would make things rather crowded.

On one occasion, the researchers took an infertile female away, and gave her her own colony. She developed into a queen, and became pregnant, but never gave birth. No miscarriages, either; the embryos just vanished (as they do if they die young enough). Of course, that could be due to illness of some kind, but it might be that she had the ability to cancel her own pregnancy if she didn't feel comfortable enough. A second attempt to found a new colony was more successful; although the two females placed in it fought viciously to the death, the survivor went on to become a queen and raise a litter of thirteen pups.

Like many other mammals, the young of many rodents are born relatively undeveloped - hairless, blind, and essentially helpless (quite unlike, for example, deer). Its hard to tell whether naked mole rats follow this pattern, since they're hairless and virtually blind even as adults, but they certainly aren't able to walk from birth, so greater development doesn't seem likely to be the whole story behind their longer pregnancy.

The researchers suggest that the real reason may be down the almost perpetual pregnancy required of an animal that's the sole source of babies for a colony. Because they mate again so soon after birth, if naked mole rats had a normal gestation period for their size, of around 30 days or so, their first batch of young would still be suckling when the second litter was born. Far better then, to have double-sized litters half as often, giving you enough time to raise them all, while still having the same number of children in the long run.

And how many children is that, anyway? The researchers also measured something called the "lifetime reproductive effort", which essentially compares the total mass of a female's offspring when they become independent with her own adult body mass. For most mammals, around 1.4 is quite normal, and its rarely higher than 2.2 in rodents. For the naked mole rat, the researchers calculated a value of - wait for it - 139.8.

That's what you get for being the only reproductive female in a colony of over a hundred adults.