Why Are There Marsupials in America? 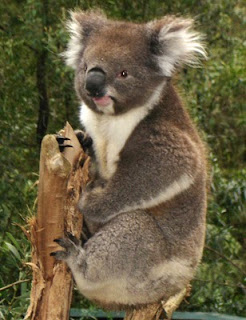 So, what exactly are marsupials?

If you answered "mammals where the female carries her young in a pouch," I'm afraid the big QI buzzer has just gone off. That's because, while its mostly true, there are, in fact, some marsupials that don't have pouches.

Along with the placental mammals, the marsupials represent one of the two main groups of mammals alive today - although there is of course, also a third, much smaller, group that includes the enigmatic platypus. The oldest known marsupial fossil, Sinodelphys, dates back to 125 million years ago, as does Eomaia, the oldest fossil on the line leading to placentals. Our best guess is that the two groups diverged not long before that, probably no more than 131 million years ago. But its worth pausing to consider how far back that is; its a little over half way through the age of dinosaurs, and long before such famous animals as Tyrannosaurus, Velociraptor, and Triceratops evolved. Indeed, its as far back from Tyrannosaurus as that animal is from us today - half the history of marsupial evolution occurred before dinosaurs went extinct.

Although not all marsupials have pouches, the definition of the group does largely rely on their manner of reproduction, and that's hard to tell from fossils. So palaeontologists tend to prefer the term "Metatheria" (which means something like "beyond-beasts", or "other-beasts") to refer to the fossil group that includes marsupials, and "Eutheria" ("true beasts") to refer to the group that includes the placentals. Indeed, it seems entirely plausible that the earliest Eutherians reproduced much as marsupials do today, and only later evolved their modern reproductive biology.

It used to be thought that marsupials had originally evolved in North America, but the fact that Sinodelphys (only discovered in 2003) happens to be Chinese may suggest they were originally from somewhere a little further east. At the time, though, the two continents were joined, and the early marsupials seem to have quite quickly moved to the Americas. When the Central American land bridge began to form, marsupials began to spread south, and only just in time, because the asteroid impact that wiped out the dinosaurs seems to have all but killed off the North American marsupials as well.

The marsupials of South America did survive, however, and they are still there today. The modern American marsupials are all relatively small, mostly tree-dwelling, animals, although there around a hundred different species in two orders, collectively known as "opossums". That hasn't always been the case, and, at one point, there were a number of large carnivorous marsupials in South America, some looking something like a cross between a hyena and a wolverine, and others quite cat-like. When a second wave of placental mammals headed south over a re-formed land bridge around 3 million years ago, the last of these died out, leaving only the modern opossums. Still, this did also provide the opportunity for some opossums to sneak north, and it is from those that the solitary living North American marsupial, the Virginia opossum, is descended.

Long before that, however, other marsupials had moved south, and arrived at the continent where they are best known today: Australia. To do this, they would have to have crossed over Antarctica, which formed a land bridge at the time and had yet to develop its heavy ice sheets. We have, as you might expect, very few fossils from this continent, and that's a pity, because of the existence of an animal called the monito del monte. This small, insect-eating, animal is clearly a member of the "Australian marsupials", in the sense that it's more closely related to creatures like kangaroos than it is to opossums. The problem is - it lives in Chile and Argentina.

How did it get there? The best guess is that the Australian marsupials really evolved in South America, and the monito del monte was the only one to be left behind when the others headed south. Fossils from Antarctica, though, would really help clear that one up... but good luck hunting for them.

Once they had arrived in Australia, the marsupials found a continent devoid of placental mammals, and rapidly diversified into all the many forms seen today, as well as a number that have since gone extinct. With the absence of hoofed grazing animals, for instance, kangaroos evolved to take their place, while creatures such as the Tasmanian devil took the role of the carnivorans. There are native placental mammals in Australia today, but most of them probably arrived with the aborigines - a notable exception being the bats, who really didn't need anyone's help to cross the seas, thank you very much.

So, to turn back to our original question - what are marsupials, anyway? There are a number of differences in the skeleton that make it clear that marsupials are a separate group, rather than the ancestors of placental mammals, but the clearest is probably the teeth. Besides the single canine tooth, the first placental mammals seem to have had three incisors, four premolars, and three molars in each quarter of their jaws, while the original marsupials had four or five incisors, three premolars, and four molars. The presence of those extra teeth is a distinctive feature of the group today. Its also worth noting that marsupials don't have milk teeth, except, oddly, for the third premolar - none of the other teeth get replaced after birth, so there's none of the "teething" that we placentals go through when young.

Still, while such definitions are useful to palaeontologists, they're not the key feature that divides living marsupial and placental animals. That, of course, is the reproductive system. Actual pregnancy in marsupials is very short, and the young are born relatively undeveloped. They crawl from the mother's womb to the teats, where they attach themselves and continue their development. In most marsupials those teats are, indeed, protected by a pouch to keep the young safe, but there are a few exceptions, such as the shrew opossums, where the young simply have to hold on.

Marsupials do, in fact, have a placenta of sorts, but it is much simpler in structure than that of the true placental mammals and, crucially, in most species, its cells do not penetrate the wall of the uterus. In fact, if they did, the mother's own immune system would recognise the offspring as a foreign invader, and try and destroy it, since the barrier that stops this from happening in placental mammals never evolved in marsupials. This limits the amount of nutrition that the embryo can receive from the mother's blood stream, and is why it's important for it to switch to milk as soon as possible. (Bandicoots, incidentally, do have something much closer to a true placenta, although it still doesn't last very long).

This isn't necessarily a disadvantage, which helps explain why marsupials didn't go extinct in the Americas, despite living alongside supposedly more "advanced" placentals. As I've mentioned before, its much easier for a mother to control the amount of milk its young receive than to control what happens across a placenta. That can be a good thing if your food supply is uncertain - better to lose one set of offspring during a drought and live to raise another later, than for both mother and child to die because lack of food. In fact, marsupial lactation is more complicated than that of placentals, with the mother producing different types of milk as the young age and their needs change.

The marsupials are not some evolutionary dead-end, out-competed outside of Australia by we more advanced mammals. They have been evolving for as long as placentals have - longer, by some definitions - and represent a different path that can, in at least some environments, clearly hold its own.