Cultural Traditions of the Spider Monkey 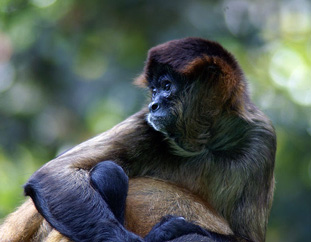 One of the distinguishing features of humanity is the great cultural variation that we exhibit across the globe. The traditions and practices of, say, the Masai of Africa, are quite different from those of western Europeans. In animals, by contrast, behaviour tends to be firmly dictated by genetics. Even where there is clear learning, with mothers teaching their offspring to hunt, for example, the end results of that learning are often fairly similar across a given species.

But, as is so often the case, the dividing line between humans and our closest relatives is not so clear as that broad generalisation would imply. Traditions have been observed in other animals, even including some that aren't primates, such as dolphins and killer whales. When we talk about 'traditions' in these animals, we are referring to behaviours exhibited by some populations of a species that are, for no obvious reason, not seen among other populations. The behaviours are obviously not genetic, or everyone would perform them, but on the other hand, neither are they simply the result of some lucky discovery by a single individual that was never passed on to their peers.

Most research on such traditions has been carried out on chimpanzees, and has tended to focus on the way that they use tools. This has obvious relevance to our own origins, as well as having the advantage of being easily identifiable. Chimpanzees do seem to learn at least some of their behaviour by copying others in their local cultural environment, and this sort of learning may extend quite a way back in our evolutionary family tree, since such tool-using cultural traditions have also been seen in orangutans.

But tools do nor represent the entirety of culture. To look further back into the origins of traditions, it may be useful to look at our more distant relatives, and to consider behaviour that is more relevant to the way they live their lives. Geoffroy's spider monkey (Ateles geoffroyi) is native to the Americas, placing it firmly on a branch of monkey evolution entirely separate from that which eventually gave rise to humans in Africa. They appear to be remarkably intelligent animals - perhaps even more so than gorillas - but they don't have opposable thumbs, and since the main thing they want to do in life is pick fruit off trees, they really don't need much in the way of tools, anyway.

They also have a relatively unusual social structure among mammals. They live in groups, but individuals often wander about different groups, and the groups themselves are always merging and splitting. In contrast, most group-living mammals tend to stick to herds where the females stay with their relatives and the males wander off to find and dominate new groups elsewhere, and then stick with them. The more complex arrangement among spider monkeys means that it will be relatively common for individuals to encounter past 'friends' that they haven't seen in a long time, and perhaps to develop their own greeting rituals for that purpose. It's worth noting that, although they belong to a different part of the primate family tree, chimpanzees are among the few other mammals to live like this (along with humans, of course).

It can be difficult to demonstrate that particular behaviours are not genetic in origin, since even within a species, there could well be genetic differences we are not aware of. However, the usual way of looking for cultural traditions, as used for chimpanzees and orang utans, is to examine the behaviour of animals in different locations, and see how much it differs. This was recently performed for an array of 62 different types of behaviour in Geoffroy's spider monkeys in Costa Rica, Panama, Belize, and Mexico.

Most of the behaviours turned out not to fit the definition of a 'tradition'. Around 20 were performed by monkeys in all the study sites, making it difficult to rule out these being genetically programmed habits. Others were very rare, suggesting that even if one animal had learned that this was a useful thing to do, it never (or at least, hadn't yet) passed the information on to its fellows. For a few, there were obvious reasons why the behaviour couldn't be carried out just anywhere - for example, its difficult to eat the fruit of cohune palms if there aren't any where you live.

But that still left 22 behaviours that just didn't fit the obvious pattern. Some of these were related to the choice of foods. In two sites, almost all the monkeys were seen happily eating the fruit of the elephant ear tree (which, despite being a tree, is also a really big legume). Yet, in the others, they never touched the plant, apparently not realising it was edible, even though there were plenty around. One Costa Rican population had even figured out that they could eat mushrooms, something not normally associated with this fruit-eating species.

Other behaviours, however, were more complex. In some areas, monkeys would climb onto the shoulders of their fellows in piggy-back style in order to appear larger and more threatening to an intruder, while in others it never seemed to occur to them to do this. The monkeys in Panama were often seen to walk upright on their hind legs, something that the monkeys in Belize never did, and was quite rare elsewhere.

As predicted, many of these more social behaviours were related with greeting outsiders, perhaps to determine whether they were long lost friends who shared the same traditions. These included various forms of scent marking, and whether or not they rubbed fig roots on their bodies (presumably to give themselves a distinctive smell). Although all of the groups greeted outsiders in the usual manner for their species - which includes a lot of embracing each other - some of them also kissed each other lightly on the cheeks. Yet the Panamanian monkeys, while they would blow kisses at each other from a distance, never actually kissed each other directly.

The same Costa Rican population that ate mushrooms also had an unusual habit of sometimes climbing to the tops of tall trees and facing into the wind with their mouths open. Presumably this felt pleasant, and probably helped them cool down, but again, its significant that none of the monkeys elsewhere did this, despite the obvious opportunity to do so.

All in all, there was significant variation among the different populations in terms of which practices they performed and which they didn't. Every population had at least some unusual practice that at least one other didn't possess. It's hard, as I mentioned earlier, to be sure that none of these are due to some minor genetic difference, especially since the communities are isolated from each other by the increasing fragmentation of Central American jungles (which has led, sadly, to the species becoming endangered). But that also reduces the chance for cultural communication across large distances, allowing particular traditions to develop and survive in isolated areas. That there was no pattern to which behaviours were exhibited where also tends to count against the genetic theory. If that were the case, then, since one might expect monkeys closer together geographically to be more related, one would also expect them to have more habits in common, and they don't.

Culture and learning are things that humans have developed far beyond any other species on Earth. But we are not entirely separate from the rest of the animal kingdom. The brains of our closest relatives are not simply hard-wired with everything they need to know, and sometimes animals can discover a way of doing something that other members of their species elsewhere have not. When they do, at least some of the time, they can pass this information on to their relatives and neighbours, something that requires the sort of cognitive powers that we tend to think are purely human.

Humans are animals, and the line between us and 'them' is sometimes a very blurred one.

[Picture from Wikimedia Commons]
Posted by JK Revell at 14:14