How do Dolphins Sleep? 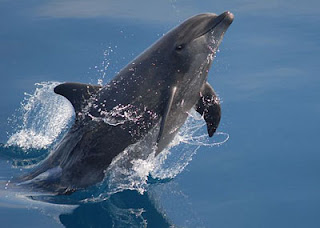 All mammals need to sleep. Quite why isn't entirely clear, although it may well have to do with saving energy, allowing the body to repair itself, consolidating the memories of experiences learned during the day, or any of a number of other reasons. What is clear is that it's very important, and that there's no way to avoid it in the long term. Indeed, it's not just mammals that do it, but also all species of bird, and probably just about every other creature with a brain, whether vertebrate or invertebrate. (Creatures without a brain, such as jellyfish, don't seem to sleep, although, to be honest, it's hard to see how you could tell if they did).

But sleep presents a problem, in that the animal is vulnerable while it's snoozing. This is why most mammals make dens of some kind to which they can retreat overnight - or during the day, if that's their preference. Dens, of course, can be remarkably varied, whether they are carefully constructed burrows, crevices in tree trunks, natural caves, or whatever, but most animals that live in the right sort of environment have them.

Some animals, however, don't live in the right sort of environment. Large herd animals out on the plains have no such luxury, for instance. As a result, they are vulnerable to attack by predators, unless some members of the herd can stay awake and keep an eye out, alerting their kin when danger threatens. For mammals at sea, though, the problems are even greater.

Mammals need to breathe air, so finding some kind of burrow on the sea bed - even assuming you live in shallow enough water to reach the sea bed - just isn't an option. If you're going to sleep, and avoid drowning in the process, the obvious solution is to do it at the surface, floating on the waves. Which is what sea otters do, for example. But what about dolphins?

Sleep presents three problems for dolphins. Firstly, as for other aquatic mammals, there's the danger that they might drown while doing it. Clearly, as problems go, that's quite a big one, but there are other issues, too. There is, as I've mentioned, the problem of vulnerability. Dolphins are, for example, frequently attacked by sharks, something that they obviously want to keep a look out for. Obviously, they do try and stay away from areas frequented by killer sharks (who wouldn't?) but there's only so far that that can work.

Their other way of avoiding being attacked also relates to the third problem with sleeping dolphins: they live in herds, or pods, of several individuals. One of the key advantages of herd living, in fact, is that it makes it easier to watch out for predators, allowing some members of the herd to eat, sleep, or do whatever else they need to do while somebody else is standing guard. However, when an antelope goes to sleep, it's going to stay put, and its friends can carry on around it. But a sleeping dolphin risks drifting with the currents, and losing contact with its herd.

When dolphins are awake, both of these issues - looking out for predators, and staying with the rest of the herd - are solved in the same way. In short: sonar.

A number of animals use sonar, but there's no doubt that cetaceans and bats are the ones that are best at it. Leaving bats aside, cetaceans (that is, whales, dolphins, and porpoises) use sonar as their primary sense because it enables them to find targets in even murky water, and because water is particularly good at transmitting sound.

Although many dolphins have reasonable eyesight, sonar lets them avoid predators, find their friends, and also find food. In fact, they're probably better at it than anything we've ever built for submarines. Finding food isn't really important when you're trying to sleep, but keeping a look out and staying with the herd are something that you really want to be doing as much as possible. In other words, it pays for a dolphin to stay alert for as long as it can. But just how long is that?

A recent study by Brian Branstetter and colleagues gives us some idea of the answer. They separately tested a couple of common bottlenose dolphins (Tursiops truncatus) in open-air enclosures in San Diego Bay. The enclosure was rigged with a device that generated fake sonar signals. Essentially, the device would record the dolphin's own ultrasound pings and send them back to it, from a random direction, suitably modified and time-delayed so that they would appear to have bounced off an object some distance away. Effectively, it created the illusion that, every now and then, an object popped up in the sea around the dolphin.

If the dolphin then pressed a paddle, it got a reward of fish. If it pressed the paddle when there was no illusory object around, the next one would be delayed, and the dolphin had to wait longer for its next meal. If the dolphin didn't spot the illusion, nothing happened so, again, no food. The illusions were created at random time intervals from 2 to 30 minutes apart, with no breaks, day or night, for five days solid. The researchers arranged the amount of fish the dolphins got as rewards, so that they wouldn't starve, but the question was... how long would it take before the dolphins let down their guard?

The answer is simple: they didn't. For the 120 hours of the experiment, the dolphins apparently remained fully alert. They did begin to miss a few targets towards the end of the five days, but only a very few. Even then, it seemed as likely that they were just getting bored (after all, none of the mystery sonar targets were actually attacking them) as that they were getting tired. Indeed, when they got a second, and then a third, five day trial a few weeks apart, they seemed to get better at it, missing less targets even in the fifth day.

There was also some hint that they were more active at certain times of the day than at others. However, other than being generally crepuscular, there was no pattern between them; one dolphin was most alert in the late evening, before sunset, and the other just before dawn.

One dolphin, a female, also did better than the other one, who was a male. She might have had more practice, having taken part in a similar, but simpler, study before. However, the researchers suggest that she just seemed to enjoy it more, letting out a squeal of triumph every time she got one right. So the researchers decided that five days just wasn't long enough - just how long could she keep going?

Fifteen days later, a large storm hit the San Diego area, calling a halt to the experiment. By this point, the female dolphin still hadn't even begun to flag, and was apparently just as awake as she'd been when they started. Clearly, she could keep playing this game for a lot longer than the humans could continue running it.

Bearing in mind what I said at the beginning about everything with a brain needing to sleep, how on Earth did she do it? That's over two weeks, and she wasn't even tired yet! Well, in a way, the outcome of the experiment wasn't so much of a surprise, and that's because dolphins don't sleep in the way that we do. Specifically, they can be both asleep and awake at the same time.

Sleep, essentially, is something that happens to the brain. It shuts down a number of functions, including reducing the body's overall metabolic activity. When humans are asleep, we're hardly alert at all, although we can, for example, respond to loud bangs by waking up. But what dolphins - and other cetaceans - are able to do is send half of their brain to sleep while the other stays awake. They can, in other words, quite literally sleep with one eye open.

They're actually not alone in this, because at least some birds can do the same trick. But it does appear to be unique amongst mammals. And, clearly, it solves their problem, allowing them to keep an eye on their pod-mates, and alert for any potential attackers, even while they are sleeping. It seems a deeply weird concept from our perspective, and its interesting to note that dolphins don't seem to experience REM sleep, that part of sleep during which humans dream. If so, dolphins probably don't dream, something that would presumably be very confusing if they were also awake at the same time. (Which, incidentally, raises the question of why other mammals apparently do - if dolphins don't, it can't be as essential as we might think, and certainly wouldn't explain what sleep as a whole is actually for).

So that's how dolphins sleep: with one eye open, and using their sonar to ping away at whatever's around them, keeping themselves alert and ready for action. It's a reminder of just how alien their world must be to us.

[Image from the National Oceanic and Atmospheric Administration]
Posted by JK Revell at 13:34