The hyena family is one of the smallest families amongst the living Carnivorans. Only four species survive today, of which by far the best known is the spotted or "laughing" hyena (Crocuta crocuta). Hyenas are, oddly enough, closer in their evolutionary origins to cats than they are to dogs, despite their appearance, and, to be honest, much of their behaviour. Having said that, of course, they're hardly very close relatives of cats (they're closer to mongooses), but they do happen to be on that half of the family tree.

Today, hyenas fall into one of two basic body types. There's the one everyone knows, typified by the spotted hyena, which involves a relatively heavy build and adaptations to crunching up bone. These hyenas have a reputation for eating carrion, and they certainly do that, although spotted hyenas in particular are pretty good at hunting. Still, they'd rather jump out on their prey from a short distance away than have to chase it for long distances, as a wolf would. If their prey isn't going anywhere, because it's already dead, that's even better, and spotted hyenas are strong enough to chase leopards off their kills (the fact that they hunt in packs, and leopards don't, is doubtless helpful here).

The second body type is only seen today in the aardwolf, which is just weird. But it's not the aardwolf I want to discuss today, but rather the fact that there used to be a third type. And these hyenas were actually even more like dogs than the ones we have now. Called the 'cursorial', or fast-running, hyenas, they were quite a successful group, and lasted for quite a long time before a combination of climate change and the existence of actual dogs finally did for them.

There are about four genera of running hyena, of which the best known, and apparently most successful, was Chasmaporthetes. While living hyenas are found only in Africa, this group was much more widespread. The first fossils that we now assign to the genus were identified in Europe, although at the time it wasn't clear quite how distinctive they were.

That fact was first recognised by Oliver Perry Hay in 1921, when he was working at the Smithsonian. It was he that first named the genus, but, significantly, he didn't do so on the basis of the European species. Rather, he based it on a recently discovered fossil that had been found in, of all places, North America.

It remains the only hyena known from the New World, and the 'chasm' part of its name refers directly to the geographic gulf between it and its kin. We have a better idea of what it's doing there now than Hay could have done in the 1920s, but it's still a pretty long way for a hyena to go.

But how far is that, exactly? In other words, where did these running hyenas come from in the first place, and why? The obvious way to answer this question would be to look at the oldest fossils we have. It turns out that those are about 7 million years old, dating from the late Miocene. Unfortunately, though, there are fossils of roughly the same age from both Africa and China, Which would suggest that, even by that time, running hyenas were widespread across the Old World, and doesn't tell us much about where the first ones might have lived.

The one place we can be fairly sure they didn't originate is North America. The first running hyenas (or, indeed, hyenas of any kind) on that continent date back about 5 million years. They all appear to be belong to a single species, C. ossifragus, which survived there for a long time. Indeed, they outlived their relatives back in the Old World. Most of those died out at the beginning of the Pleistocene, as the Ice Ages approached. One species in Africa, where it wasn't quite so cold, managed to live on until about the middle of that epoch, but the American species survived right through to the end... when humans arrived and put an end to a lot of that sort of thing. 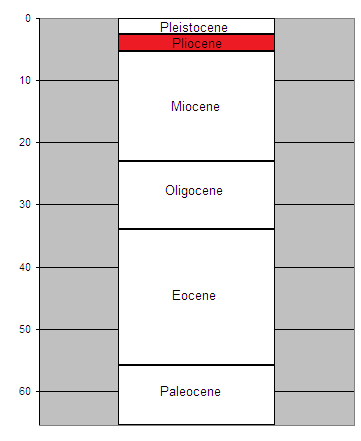 A couple of fossils from Florida, however, hint that there may have been slightly more going on. These ones look a bit more like the running hyenas from eastern Asia, and may represent a different species from their American fellows. If so, since they're relatively late, either running hyenas entered North America twice, or there's some parallel evolution going on. (It's not as if we're talking a particularly huge or unlikely change, after all).

Either way, we can say that Chasmaporthetes entered North America from eastern Asia, as many animals did, probably around the dawn of the Pliocene, a little over 5 million years ago. In general, there are clear-cut differences between them and their Old World kin, but that's much less true of all but the earliest Asian species, which do look a little bit American - either the same species, before it crossed over, or a close relative or ancestor.

In general, in fact, there seems to be more variation among the Asian running hyenas than among those in Europe or Africa, which does hint as to where we might look for the first ones. Now a newly discovered fossil lets us narrow it down a bit further.

The fossil was discovered in the Zanda Basin, an area of the Tibetan Plateau immediately north of the Himalayas. This has, in recent years, been quite a good site for recovery of mammalian fossils, and has given us fossil dogs, badgers, a primitive okapi, and, this past November, a close relative of the snow leopard, not to mention lots of mice and the like. The scientists who unearthed it date this particular fossil to between 4 and 5 million years ago, which is obviously quite a while, but by no means the earliest of its kind.

Still, there was enough there to identify the slender, speed-adapted legs of a running hyena, and enough in the skull to identify it as a previously unknown species of Chasmaporthetes. The researchers also conducted a survey of the genus, tidying up many of the existing species. It's hard to know, at this stage, how much of that will stand the test of time, but what's interesting is how they fit their new species, C. gangsriensis, into the picture.

According to their analysis, this particular animal had a lot of features in common with other, lesser known, genera of running hyena, such as Lycaenops, but which aren't normally found in Chasmaporthetes. This would put it close to the origin of the running hyenas as a whole, a creature retaining primitive features that others later lost.

It's not the common ancestor, of course, it's far too late for that. But it could be a late survivor, a relatively unchanged form of something that was, and that proved less successful, in the long term, than its more wide-ranging kin. This, then, is the picture that emerges:

The common ancestors of both the running hyenas and the modern, scavenging sort, were a group called the ictitheres. These were small, primitive hyenas, somewhat similar to a jackal or large fox. Like their descendants, they were widespread, and, at some point prior to 7 million years ago, some of them entered Tibet.

Tibet, an isolated region of high terrain and distinctive climate, has often been cited as the origin point for new species. Most of them are still broadly restricted to that area - examples include chiru, blue sheep, yak, and, of course, snow leopards. On this occasion, though, perhaps a species evolved that proved rather more adaptable. The hyenas here became larger than they had been, but remained slender, allowing them to chase down their prey over the open wilderness of the Plateau, more like wolves than scavenging jackals. In time, they came down out of the mountains, chasing animals across lowland plains while their relatives instead developed powerful jaws and strong bodies to crack open the bones of downed carcasses.

We'll need older fossils to know how accurate this story is, but it is consistent with what we know. For a while, though, Chasmaporthetes was more widely successful than any hyena genus that has followed it, even invading the Americas. It brings us back to a time when sleek, fast-running hyenas raced across the cold, arid, plateau of Tibet. To a time when at least some hyenas may have acted like cheetahs.

[Picture by "Sara & Joachim", from Wikimedia Commons]
Posted by JK Revell at 15:03