How Long to Make an Elephant? 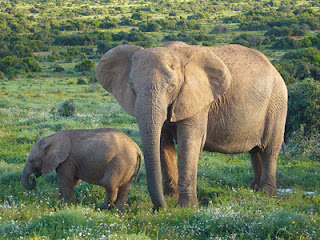 Biology, on the whole, is not a great one for following mathematical laws. Physics has no such problem, and is replete with mathematical formulae for calculating this and that, which never fail, so long as you've understood them properly. Biology, not so much. It's squishy, and variable, and while it does follow rules at least some of the time, there are so many confounding factors that they're really more like guidelines. (Barring, of course, those imposed directly by physics, such as the minimum wing area needed to get airbourne).

Still, it does have some, and a lot of them are to do with the mass of an organism. We can say, for instance, just to pick an obvious example, that a bigger animal needs to eat more food. Or, more accurately, more calories, since otherwise you get into all sorts of difficulties depending on how nutritious their diet happens to be.

It's not simply a matter of twice the mass, twice the calories, either, because there are economies of scale here. Talking about mammals, as we do here, these economies have a lot to do with heat loss. A bigger animal retains more heat than a smaller one, and, since mammals are warm-blooded, that means a bigger animal doesn't need to work quite so hard to keep that body temperature at the right level.

There is, in fact, a rule here, and it's something like C = aM0.75, where C is the amount of calories you need, M is your body mass, and a is some fudge factor to convert the one into the other. Cutting out the maths, because, oddly enough, there may be some readers of this blog who aren't wildly excited by maths, what this actually means is that, if you double the size of a mammal, the amount of calories it needs goes up by about two-thirds. For instance, if a 150-lb human being needs something in the general range of 10,000 calories a day (yes, I'm making a lot of assumptions here, but we want a nice round number), a 300-lb mammal ought to need about 16,667 calories.

Okay, so it rather depends what you're doing - you can knock at least 10% off that if you're sitting in front of the TV all day. Or, in the case of wild animals, fast pursuit predators do burn more calories than, say, sloths, or something that's currently hibernating. And the exponent isn't really 0.75, it's just kind of in that area, and varies a little bit depending what you're talking about. So, no, biology still isn't physics, but the rule mostly works, and it's a bit better if you're looking at something less variable, such as basal metabolic rate (the amount of calories you need to burn just to keep your heart pumping and so on), or resting oxygen consumption.

On the other hand, there are some things that actually get less as an animal gets bigger. Heart rate in an example, where the hearts of larger mammals beat more slowly than those of smaller ones. Double the mass, and the heart rate drops by something like 15% - although, again, there's a lot of variation in here.

And then there's reproduction. Pregnancy in the house mouse (Mus musculus) lasts about 20 days, and, in the African bush elephant (Loxodonta africana), it's 645 days. Again, there are some confounding factors in here, such as delayed implantation. In delayed implantation, in order to synchronise mating and birth with certain times of the year, some animals send their embryos into a sort of suspended animation just after the egg is fertilised, and wait for an appropriate period before actual development begins. This is useful for seals, for instance, which only want to come ashore for a long period once a year, and so want to get both their mating and birthing done at the same time, even if (for smaller species), pregnancy would otherwise take less than 12 months.

But we can account for that sort of thing, and produce a rule to estimate how long pregnancy ought to take for a placental mammal of a given mass. (Marsupials are a different matter, for obvious reasons). The rule that's usually quoted is, approximately, G = aM0.25. Which, to save you the maths, comes out to about a 20% increase in gestation time for each doubling of mass. So the size of the animal may not make as much difference as you might think at first, but, when you consider that an African elephant is around 275,000 times heavier than a mouse, that's probably just as well.

But just how good is that rule?

Take domestic dogs (Canis lupus familiaris), for example, since most people are quite familiar with them. Pregnancy in a dog lasts, on average, 63 days. Thing is... that's just as true for Yorkshire Terriers as it is for Great Danes, and it may not have escaped your attention that one of those is quite a bit larger than the other. The same holds true for other domestic animals with variable size - Shetland ponies are pregnant for just as long as cart horses, for example.

Something here doesn't seem quite right.

To understand what's going on, we need to understand where the rule comes from in the first place. There is, after all, no doubt that elephant pregnancies do last longer than those of mice. And horses, cats, and so on, are somewhere in between, roughly where you'd expect them to be. The rule of plus 20% per doubling of mass also seems to be broadly true for other strictly biological factors, such as an animal's total lifespan, or even how long it takes food from going in at one end of the animal to being pooed out at the other. So it does make a kind of sense.

A 2013 study looking at over a thousand species found that the rule does work for placental mammals, if you take them as a whole and apply a standard statistical analysis. It was slightly less than tradition has it - a 14% increase per doubling of mass, instead of 20% - but it was there, nonetheless. So far, so good.

But then they applied a more complicated test that makes allowance for how closely related different animals are. The effect dropped away dramatically, now down to only 6% for placental mammals as a whole, and vanishing altogether for some groups, such as bats. Two different breeds of domestic dog are about as closely related to one another as its possible to be, in the grand scheme of evolution, which explains why the rule just doesn't hold for them.

What's happening here seems to be that it takes time for animal species to change the length of their pregnancy. If two groups of animals - elephants and mice, say - have been evolving separately for a very long time, their gestation has time to adjust itself to a reasonable duration for their size. But dogs, among others, just haven't had long enough yet for any changes between different breeds to have that sort of effect. Which suggests that it's a lot easier for mammals to adjust the speed at which a foetus grows (they're all starting out as an egg cell that is, more or less, the same size) than it is to adjust the gap between conception and birth.

This understanding that rules about pregnancy length don't always hold with closely related, but differently sized, animals, does have its uses. For example, the lowland anoa (Bubalus depressicornis)  is a kind of water buffalo found only on Sulawesi in Indonesia, and neighbouring islands. Significantly, it's only about the size of a large deer, and about the half the weight of true water buffalo (Bubalus bubalis) on the mainland. But, from the limited number of studies done, it doesn't seem that their pregnancy is really any shorter. Which, armed with this new information, we can now say probably means that the two species didn't part company all that long ago, confirming earlier speculation on the subject.

This is, in other words, insular dwarfism.

The increase in pregnancy length is so variable to begin with because a lot of this has to do with breeding strategy. Animals that give birth to litters tend, on the whole, to have shorter pregnancies than those that don't. They practice what's technically called r-selection, in which an animal produces as many offspring as it can in a short period of time. Shorter pregnancies, and shorter periods of parental care both assist in this, and the end result is that babies are pushed out so quickly that they're still fairly helpless at birth. They're typically blind, and often hairless, for example. We can see this, for instance, with cats, dogs, and mice.

The opposite doesn't necessarily hold, with single-offspring mammals sometimes producing helpless young, and sometimes not. Compare humans with horses, for instance. But precisely because it doesn't always hold, the average pregnancy is going to be longer. This is by no means the only thing throwing a spanner in the works, or elephants wouldn't have a pregnancy that lasts about twice as long as that of right whales, which weigh over ten times as much as they do. But it is a part of it.

Which brings me back to where I started: biology is not a great respecter of neat, mathematical rules.

[Note: I had been planning to write about the newly discovered species of tapir this week. But, honestly, Darren Naish said basically everything I had planned on - van Roosmalen's pygmy tapir included - so just go over there and take a look, if you haven't already!]

[Photo by "Gorgo" from Wikimedia Commons]
Posted by JK Revell at 16:35