The Puzzling History of the Clymene Dolphin 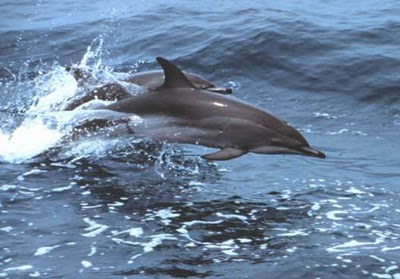 The taxonomy of dolphins is, as I've mentioned on a couple of previous occasions, a complicated issue. The problem is that at least some dolphins underwent a very rapid diversification in the not-so-distant past. New species appeared so shortly after one another that, from the perspective of the present day, it's very difficult to figure out in what order it happened, or which dolphins are most closely related to which others. This particularly affects the genera Tursiops (the bottlenose dolphins) and Stenella (the spinner dolphin and its relatives), and likely has some effect on one or two others as well.

If you look back at those two posts (sorry, this won't work if you're reading this on a mobile) you'll see that I drew up a plausible relationship tree based on the research of Kate Charlton-Robb et al, who identified the existence of the Burrunan dolphin as a distinct species in 2011. One of the animals you'll notice that I mentioned was the Clymene dolphin (Stenella clymene), and that I said in one post that "the spinner, spotted, and Clymene dolphins were all assumed to be related, on the not unreasonable grounds that they look much the same as one another..." Emphasis on the past tense, because the study seemed to show that, despite their visual similarity, they weren't all that closely related after all.

Well, now we might know why... not that it necessarily makes things any simpler.

But let's step back a bit, because the history of the Clymene dolphin isn't exactly straightforward to start with. Clymene dolphins were first identified as a separate species by John Edward Gray in 1846 in an account of the zoological discoveries made during the voyages of explorer James Clark Ross, for whom the Ross Sea is named. However, Gray made a typing error and accidentally gave the Clymene dolphin the same scientific name as another animal he'd described on the previous page. It took him four years to get his explanation for that into print, and to give the Clymene dolphin the name it now bears.

(As an aside, he never did explain why he'd called it that. Judging from the sorts of names he gave other animals, he was probably thinking of Clymene the ocean nymph, which is why it gets a capital 'C', but we don't know for sure).

But none of that seemed to matter, because, as early as the 1880s, zoologists decided that it might not be a species at all. At best, it was a subspecies of something else, and maybe not even that much. So it remained until 1981, when W.F. Perrin elevated it back to species status, identifying it at the time as "probably closely related" to the spinner and spotted dolphins.

This being in the days before rapid genetic sequencing, he did so on the basis of its physical appearance. Together with further detailed examinations by Thomas Jefferson in 1996 (presumably not that Thomas Jefferson) we can now quite reliably tell them apart from their two relatives. Externally, they have a different pattern of colouration, including a distinctive "moustache"-like stripe zig-zagging back from the eye to the mouth. If you have a skeleton to examine, the skull is noticeably smaller than that of a striped dolphin (Stenella coeruleoalba) and with a shorter, wider snout than a spinner dolphin (Stenella longirostris). The differences are sufficient that, suitably armed with a skull, you should apparently never mistake one for the other.

So far so good: the Clymene dolphin is a species. The problem was, once we did start doing genetic analysis on it, the answers we started getting didn't make any sense. Essentially, you got different explanations for how it related to other, similar, dolphins, depending on how you did the test. Physically, it looks like it ought to be closest to the spinner dolphin, and the genetics sometimes bear that out, and sometimes don't, and sometimes say something else entirely.

A few days ago, the most detailed genetic study yet was published by Ana Amaral and co-workers, and it might well explain what's going on.

The gene that is most commonly used in these sorts of study is cytochrome b, and there are at least three reasons why it's useful. For one, it's found in just about every living thing that breathes oxygen, which means we can apply the same test to creatures across the entire animal kingdom - and beyond. Secondly, its exact structure is highly variable, so there's always some slight difference even between closely related species, making it really easy to see what has changed where. Finally, it's only inherited in the female line, which simplifies the picture.

When the researchers looked at the cytochrome b genes in several individuals of the various species, they found that most of the Clymene samples showed the species to be most closely related to the striped dolphins. Two, however, seemed to come from animals that were actually spinner dolphins - apparently, they had been misidentified. But more on those two in a moment.

But the researchers didn't stop there, and went on to look at a further six genes, all from nuclear DNA, and hence inherited from both parents. Two of the genes turned out to be pretty much the same in all three species, and so possibly not a lot of use. One showed, quite clearly, that Clymene dolphins were most closely related to spinner dolphins... exactly the opposite of what cytochrome b had shown. Another said more or less the same, if not quite so strongly, while the other two just showed that they were... well, different.

So we still have a mess, albeit with better evidence that it's a real one. But what about those two spinner dolphins? Why had anyone thought they were Clymene dolphins in the first place?

Well, it turns out that they were part of a mass stranding of Clymene dolphins that occurred in Florida in 1995. Photographs of their bodies weren't clear enough to check for the distinctive markings on their faces, but the skulls were still in storage. And, when the researchers checked them, they fit all the criteria to be Clymene. They hadn't been misidentified after all, so what the heck was going on with their genes?

Remember, cytochrome b is only inherited from your mother, and that explains what was going on with these two individuals: they were hybrids, their mothers having been spinner dolphins, and their fathers regular Clymene dolphins. Which, as it happens, not only explains their existence, but also gives us a substantial clue as to why the genetics of the species as a whole is so messed up.

We know that it is possible for dolphins to cross-breed. Given how closely related they are, it's not even very surprising. Heck, there's even a report of a hybrid between a bottlenose dolphin (Tursiops truncatus) and a long-beaked common dolphin (Delphinus capensis) born at SeaWorld California that turned out to be fertile. That's probably due, at least in part, to the fact that virtually all dolphins have 44 chromosomes - it's the fact that a horse has 64 chromosomes and a donkey only 62 that ensures mules are sterile.

This gives us the most likely explanation of why the mitochondrial DNA of Clymene dolphins says they are most closely related to striped dolphins, while the nuclear DNA says they are closest to spinner dolphins: they're both true. The entire Clymene species appears to have arisen by cross-breeding between the other two species, with the striped ones on the female side of the family tree. It happened often enough in the past that a stable population arose, breeding (mostly) with its own kind, rather than with either of its ancestors, creating a new species where none had been before.

This is not generally the way we think of new species arising, especially in mammals, but it's not without precedent. A species, or possibly subspecies, of Jamaican fruit bat, Artibeus schwartzi, seems to have arisen from a cross-breeding population of no less than three species (or subspecies). There's even a possible example among primates, in the form of the stump-tailed macaque (Macaca arctoides), and there may well be more.

That this sort of thing is unusual among mammals goes part of the way to explain how the species remained distinct once it had formed. Clymene dolphins live in the tropical Atlantic, alongside both of the other species (which are also found elsewhere), so it's hardly as if they've been kept apart by mountain ranges or whatever, as is so often the case with new species. Nor is it obvious, so far as we know, that they eat different kinds of things, and so prefer different parts of the ocean. Since they clearly can cross-breed if they want to, that they don't bother is probably down to complex issues of dolphin behaviour. If females pick their mates, as seems likely, then female Clymenes may not, on the whole, find males of the other two species particularly sexy. After all, if we can tell them apart, they surely can.

Mixing of the genes between two closely related species may have produced a third species that's visibly different from either. coming together in novel combinations that mean the Clymene doesn't look like a half-and-half mix, but entirely it's own thing. It's probably not a very common way for new mammalian species to arise, but it does at least appear to be possible. No wonder the taxonomy of dolphins is such a mess.

[Picture by Keith Mullin for the NOAA. In the public domain.]
Posted by JK Revell at 14:07