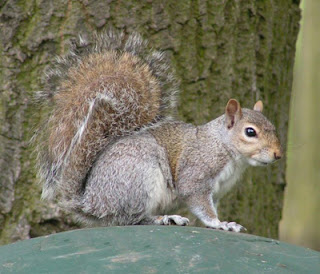 The fossils of mammals, and, indeed, other vertebrates, tend to consist largely of bones. That's not an absolute rule, of course, and occasionally other parts do fossilise, and there are also remains of things like footprints and poo. But, generally speaking, it's much harder to get an idea of the soft anatomy of a long-extinct mammal than it is of what its skeleton looked like.

There are many soft organs that we'd really like to understand the evolution of, but, while we can make inferences on other grounds, direct fossil evidence is always likely to fall short for most of them. The brain, however, is something of an exception, and this is perhaps fortunate, given the importance we tend to attach to it.

This is not to say, of course, that finding direct fossil evidence of brain structures in long gone mammals is particularly easy. But the brain sits inside the skull, and is fairly tightly wrapped within it. Which means that if we can get some idea of the shape of the hollow bit on the inside of a skull, we've got a pretty good idea of the shape and size of the brain it once housed. This has, in fact, been done for a number of fossil mammals, but, generally only of large ones. For smaller mammals, such as rodents, the evidence is much more patchy.

The problem, of course, comes down to how exactly you're going to find out the shape of the inside of a skull, especially when it's small and fragile. One way you could do it is simply by being really lucky. After an animal dies and turns into a skeleton, there's a fair chance that silt or other material is going to get inside the hollow skull, hopefully filling it all up. Should the surrounding skull then happen to fall away as the bone fossilises, what you'll have left is a natural endocast; a chunk of stone in roughly the shape of the original hollow. This doesn't happen very often, but it's not unknown, as this study of a 20 million year-old porcupine brain shows.

Assuming you're not that lucky, you could just chip away the skull from around the infilling material... but that rather destroys your fossil. If it were a bigger animal, and the interior didn't happen to fill up, you could try making a cast of the hollow interior with latex. Try that with a rodent skull, though, and it will probably just fall apart.

Fortunately, modern science comes to the rescue, in the form of CT scanning. Using this technology, it is possible to build up a 3D model of the inside of a skull without ever having to open it or break it apart. With this, we can finally begin to peer inside the heads of long dead animals, and the first ever such analysis of a fossil rodent has just recently been published.

The rodent in question belongs to the fossil species Ischyromys typus, and it lived in Nebraska during the early Oligocene, around 30 million years ago. This, it should be noted, is almost half of the way back to the extinction of the dinosaurs and the dawn of the Age of Mammals, and long before the origin of, say, the first mice. While rodents in general do date back quite a bit further than this, it's still fairly ancient, and, significantly, the species belongs to a very early branch of the rodent family tree.

So early, in fact, that it's not entirely clear where it fits within that tree. For much of the last century, many authors argued that we can't say any more than it's an "early rodent" with no particularly close relatives among modern forms. More modern studies, however, have shown it to be most likely a very early "sciuromorph", related to the ancestors of squirrels and dormice. (Although not literally itself the ancestor of either, since both groups are definitely older than 30 million years).

Perhaps the first question we might want to ask about such an early rodent brain is "how big was it"? It has been argued since at least the 1970s that mammal brains have tended to grow larger over the course of evolution, even after allowing for the increase in size of the animals themselves. Exactly how accurate this is, and whether it applies to every kind of mammal might be questioned, but with so few points of reference for fossil rodents, in their case it's hard to say one way or the other.

Of course, you can't simply compare the size of the brain with the size of the rest of the animal. There is a minimum size for a fully functional mammalian brain, and as a result, small mammals have a larger brain, relatively speaking, than big ones. To take this into account we have to apply a mathematical formula, the encephalisation quotient, to the size of the brain and the weight of the animal. If the output of this formula is 1, the animal has exactly the size of brain we'd "expect" for a mammal of its overall size. Anything over 2, and it's particular brainy - most such animals are primates or cetaceans, although elephants may also qualify.

Applying some guesswork to determine the weight of Ischyromys - it was about 60 cm (2 feet) long, so not exactly small - and applying different versions of the EQ formula, the authors of the new study come up with a value of about 0.5, which is roughly the same as a modern mouse. At first sight, this makes it look as if rodent brains haven't changed much over the last 30 million years or so, but, as it turns out, modern squirrels have an EQ of around 1.2, so if Ischyromys is more closely related to them, there has clearly been quite a significant change somewhere along the line.

On the other hand, it is just one data point, and it has been suggested that tree-dwelling rodents tend to have larger brains than those that simply walk along the ground. Ischyromys probably did the latter, which may be relevant. (Similarly, the authors point out that the primates that lived at the same time as Ischyromys had EQs of around 0.7 to 1.0, so perhaps heading to the trees earlier had given them a head start). Either way, we'd probably need similar evidence from mouse-ancestors to get a full picture.

But, in a way, this doesn't really tell us much. The real purpose of taking a cast, virtual or otherwise, of an extinct mammal's brain is to determine its shape. By determining the proportions of various parts of the brain, we can get some idea of what the animal actually used it for, and perhaps get some clues as to its lifestyle.

Vision, which we might expect to be particularly handy for something that leaps from branch to branch, is, unfortunately, harder to estimate. Given an actual brain to look at, we can assess the size of the visual cortex at the back of the brain, but this relies on detailed features that aren't reflected in the shape of the inside of the skull; it doesn't wrap around the brain that tightly. Having said which, the rear part of the brain, where we'd expect the visual cortex to be, does appear smaller, relatively speaking, in Ischyromys than it is in modern tree squirrels.

So it could be that the vision of the descendants of early proto-squirrels improved as they headed up into the trees. But the authors of the study point out that it could also be not so much that vision improved, but that the sense of hearing weakened. (And I dare say that it could be both). This could tweak the relative sizes of the brain in much the same way, especially when you consider that the brain, overall, is smaller, especially with regard to the neocortex - the outer, wrinkled, part of the brain that puts all the sensory and motor information together.

An improved (relative to modern squirrels) sense of hearing might make sense of Ischyromys, because it was suggested, way back in the 1930s, that the animal was not merely terrestrial in its habits, but that it actually spent much of its life underground in burrowed tunnels. If that were true, not only would it not need much in the way of vision (though, from the size of its eye sockets, it clearly wasn't as blind as a mole-rat), but it would rely heavily on hearing to get its way about.

Indeed, there are apparently similarities to the brain of another extinct animal called Hyopsodus, which, in that case, were suggested as evidence that the animal, like some modern shrews, might have been able to use a basic form of sonar to navigate darkened tunnels. While that was far from proven in that instance, it's perhaps even less likely here, since we don't know of any living rodent that can do this... but then again, this isn't a close relative of any of the kinds of living rodents for which it would be particularly useful.

This last is, as I say, rather speculative. It's more likely that Ischyromys didn't live in tunnels at all, except possibly to sleep in shallow burrows - it does seem rather large for that sort of behaviour - in which case, it may simply be that the auditory parts of the brain look larger because the neocortex is less well developed. This was not, perhaps, a particularly intelligent animal by modern standards, although it probably wasn't at the bottom of the scale, either.

But, hopefully, this could be the first of many such studies, bringing modern 3D scanning and computer imagery to a field about which we know relatively little. There are over 2,000 species of living rodent, and a huge diversity among both living and extinct forms. There's likely a lot more to learn.