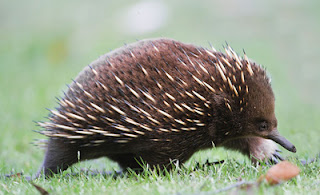 The echidna is a pretty strange mammal. Most notably, it is the only mammal other than the platypus that lays eggs. I've discussed in an earlier post why that doesn't disqualify it from being a mammal, but it is undeniably unusual. It's not even the only odd thing about echidnas, since they can also sense electricity through their snout, and the males have a four-headed penis.

I'm not making this up.

There are, in fact, four different species of echidna. The one most people are likely familiar with, though, is the short-beaked echidna (Tachyglossus aculeatus), on the grounds that it's the only one found in Australia. (The others, if you're wondering, live in New Guinea). In fact, they're found pretty much across the whole of Australia, albeit generally in open woodland or rainforest, rather than true desert. Even so, that's a fairly broad range of habitat types and variations in climate, and their behaviour does change somewhat across the continent.

For example, if the weather gets cold enough, they hibernate. Across most of Australia this really doesn't happen, although they may experience brief bouts of torpor - a sort of near-hibernation - during cold nights. But in the more southerly parts of Australia, they can enter true hibernation, and this is nowhere more apparent than at the very southernmost part of their range, on the island of Tasmania.

Tasmanian echidnas belong to the subspecies T. a. setosus. "Setosus" means "hairy" or "bristly", and the subspecies is noted for quite a thick pelt in addition to the obvious spines. This makes sense, given that the Tasmanian climate is considerably colder than that of, say, Sydney or Perth, with a fair amount of snow falling in the central highlands in winter. The echidnas respond to this by hibernating between January and June, waking up just in time for their breeding season.

But waking up "just in time" for breeding actually presents a bit of a problem. Hibernation is, by its very nature, a means of saving energy; animals can't do an awful lot while it's going on. Like all hibernating mammals, echidnas do wake up from time to time during their hibernation bout, but they're back to snoozing again with 24 hours. Otherwise, they spend those five months or so with their metabolism greatly reduced, and a body temperature somewhere between 5 and 10°C. Granted, it's normally only around 30°C at the best of times, which is quite low for a mammal, but that's still a pretty significant drop.

And, if your metabolism is shut down that far, then you obviously can't do anything that requires too much energy expenditure. Such as, say, getting ready for the breeding season.

Now, if you're a female echidna, that's not necessarily much of an issue. Female mammals don't actually spend a lot of energy when it comes to mating; for them, the big issues are pregnancy and providing enough milk to suckle their young. Echidnas do, in fact, get pregnant, since the egg stays inside them for a good four weeks before they lay it, but it's obviously not the sort of pregnancy that even marsupials go through, and likely far less taxing than that of most other mammals. Add the four weeks to the ten days that it then takes the egg to hatch, and the female has a fair while to build up her reserves ready for suckling.

(As an aside, there is a very recently developed tradition of referring to baby echidnas as "puggles". This is said to have originated with a misheard line from an Australian nature documentary, in which the presenter described the young as looking like a particular brand of soft toy. The brand not being well-known outside of Australia, many viewers apparently thought that this was the actual word for "baby echidna").

For the males, however, it's a different matter. For male mammals, most of the energy expenditure involved in reproduction goes to toward attracting and competing for females, and on producing sperm. The latter, in particular, does rather have to be done before you get down to breeding. In fact, when we don't have direct observations of mating in a given mammal species, this is often how we tell when the breeding season is. Outside of the season, when they aren't being used for much, the testes of most mammals shrink by at least half, and often by much more, growing back up again when they're ready to be called into use.

Humans, of course, don't have a breeding season.

But echidnas do, and their males are no exception to the general rule. Indeed, their gonads grow to almost twenty times their minimum size when they're ready to mate, reaching a whopping 1% of their total body mass. That's equivalent, for the average British human male, of 836 g (1 lb. 13 oz.) for the pair. This isn't necessarily as obvious as one might think - they have no scrotum, so the testes are entirely on the inside - but they've got to get the energy to do that from somewhere, and it's hard to see where if they're hibernating right up to the relevant time.

There are, of course, ways round this problem. Bats, well-known for hibernating through the winter, often have the same issue, and at least some of them solve it by making all their sperm before they hibernate, and storing it ready for use the following spring. This, however, does not seem to be the case for echidnas.

A recent study used ultrasound to measure the change in size of echidna testes over the course of a year. They showed that, surprisingly, growth began at, or slightly before, the beginning of hibernation, with a dramatic drop in size as soon as the breeding season was over. This was despite the fact that the echidnas lost weight as a whole - as well as they might, when they aren't eating for months on end. The authors point out that we don't know of any other mammal that definitively does this, although there are some species that grow their testicles during the brief periods when they wake up from hibernation.

Quite how they manage it isn't entirely clear, although it may have something to do with the animals' low metabolic rate, and it's perhaps notable that there are a few reptiles that do the same thing. But if the "how" isn't apparent, the "why" is rather easier to understand.

In any given year, about a quarter of male echidnas won't even bother trying to mate, remaining in hibernation well into the breeding season. But those that do have to face the fact that the females only mate once every other year... which means there's three males to every two females, and competition is going to be fairly intense. Since the females are promiscuous, and will mate with just about any male available, whichever one is ready first wins the reproductive jackpot. (In fact, this is probably why their testes are so large in the first place). So it makes sense to be in peak sexual fitness as soon as possible.

Not only that, but were the mating season any later, the females wouldn't have the time to raise their young to independence before the next winter set in. So the season has to be early, and the males have to be ready for it. Echidnas living further north, and not needing to hibernate, don't have this problem, and don't show the same pattern.

Another surprise, though, was that testicular growth was not related to testosterone levels. It is in most (though not all) seasonally breeding mammals, with high testosterone levels kickstarting the growth of male gonads as well as other activities related to reproduction. But, in the echidna, while their testes begin to grow in size shortly after the summer solstice, testosterone levels don't increase until they wake up from hibernation. Presumably, some other hormone, most likely GnRH, starts off the growth, but actual sperm production within the enlarged testes doesn't begin until testosterone also rises and mating activity begins.

Yet testosterone levels did correlate with another physical change. Echidnas possess small spurs on their hind ankles that connect, via a duct, to a small gland located on the back of the leg just behind the knee. In platypuses, this is a venom gland, but in echidnas it's much smaller, and typically described as being a vestigial structure than doesn't really do anything. But it turns out that it grows as testosterone levels rise, shrinking again when they fall.

This implies that it does something related to mating, at least in male echidnas. We don't know what that something is; echidnas aren't venomous and the gland is noticeably less active, when viewed under the microscope, than it is in platypuses. But those same microscopic observations do indicate that it is secreting something, and fluid does appear to build up within the spur during the breeding season. Perhaps it's a scent communicating reproductive readiness? Whatever it is, it's probably important to the echidnas.

There is still, it seems, much to learn about these odd animals.

[Photo by JJ Harrison, from Wikimedia Commons.]
Posted by JK Revell at 14:30