The Importance of Monkey Grandmothers 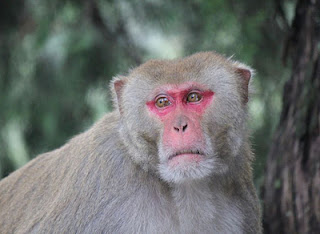 Humans are almost unique among mammals in experiencing menopause a long time before their actual death. That is, they continue living for an extended period after they cease to be able to have children and pass their genes on to the next generation. Evolutionarily speaking, one might think, there is no longer any point to them; their task is done. But, obviously, that's not the case, as we can see from the importance of grandmothers and other female elders in, for example, tribal societies. For example, their greater knowledge of the world, and the ability to share in the childcare of their descendants, can mean that the latter have a better chance of survival.

Examples of this effect among other mammals are much less common. At the extreme, some mothers simply drop dead as soon as they have raised even a single batch of children to adulthood, but even among the majority of species, it's being a mother, not a grandmother, that's really important. Perhaps the best known exception is among elephants. Here, the leader of a family group is typically the oldest living female, who helps the herd through her knowledge of the outside world (where watering holes may be found in the dry season, for example), experience of predators, and a lifetime's worth of social knowledge.

Perhaps an even better example comes from killer whales, one of the very few non-human species in which females have a long post-menopausal lifespan. Killer whale pods with elderly females do indeed fare better than those without, at least partly because of their ability to share accumulated ecological knowledge.

But what about primates? Certainly, we do know that the loss of an older female can lead to instability and disruption in groups of lemurs or monkeys, which implies that these grandmothers are doing something important. But it doesn't necessarily follow that this has anything to do with them actually being grandmothers. After all, there's a good chance that the oldest female in a group is also going to be the dominant female, and the loss of a dominant individual - whether male or female - is inevitably going to lead to disruption, if only because others will fight to take their place. In other words, it might not be a "grandmother effect" due to increased experience or the like, but a "leadership effect" from keeping everyone else in line.

In most species, the two effects are likely closely entwined, since, by and large, the grandmother is also the leader. But what if she isn't? In rhesus macaques (Macaca mulatta), social status is decided largely by birth - that is, if a mother is dominant within the group, her children will tend to be high-ranking, too. As is the case with many mammals, males leave the group when they reach maturity, finding a new one to prevent inbreeding with their own relatives. Females, however, stay put, so that a mother and her daughters will tend to be the core of the group. Significantly, however, this means that the dominant female isn't necessarily the oldest one.

One such troop of 49 rhesus macaques lives in a 2 hectare (5 acre) enclosure at the NIH Animal Centre in Maryland. The troop consists of three family lines, and, in 2009, one of those lines launched a bloody coup against the then-dominant female and her family, taking the position for themselves. (The dominant male, incidentally, survived, and kept his status despite not being a close relative of the new alpha female). The new ruling family line consisted of three sisters and their descendants. One sister became the new alpha female, but, having no children, the number two slot went to a second sister, and the number three position to that sister's daughter.

The third sister, however, the one without any particularly high ranking, also happened to be the oldest. In October 2014, aged eighteen years old, and suffering from chronic and untreatable diarrhoea, she was put down by the facility's vet. She left behind six children, including the beta and gamma male, but, family ties aside, her death could hardly be said to have left a power vacuum. So how did the other monkeys react?

Not particularly well. Observations of the monkey troop after the death showed increasing levels of violence among her relatives, as well as increased grooming, in apparent attempt to calm things down. The levels of stress hormones, as measured by hair analysis, rose among all her close relatives. All of this matches the sort of pattern we'd expect to see if the alpha female herself had died, albeit to a lesser extent.

But, whereas there, we'd expect the whole troop to be affected, as everyone struggled for power, here it affected only the deceased's family line. The other two family lines within the troop (who would have been her cousins, some of them once or twice removed) seemed to just carry on as normal. The exception was one cousin who took advantage of the disruption in the dominant family line to make a bid to increase her own status within the troop. She did so, ending up out-ranking all of the deceased's daughters, although she did suffer a serious wound from someone in the process (the actual fight wasn't seen, so we don't know which monkey was responsible).

Of course, we can't say from this exactly why the death of one elderly monkey caused such instability, with the dominant individuals apparently forced to re-assert and defend their authority. Was she a peace-keeper within the group, or valued for some other reason? But it's clear that, even though she wasn't one of the top three females in the troop, her close relatives really noticed her absence and went through a period of stressful re-adjustment afterwards.

You don't have to be top monkey for your death to make a difference.

[Photo by Ross Huggett, from Wikimedia Commons.]
Posted by JK Revell at 14:27