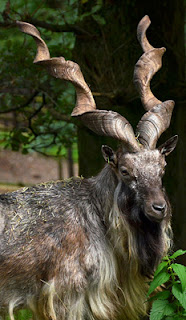 Even in mammals that are otherwise social, it is quite common for males and females to live apart for most of the year. The most common pattern involves females living in groups with their children, until the latter approach adulthood, while males either live alone, or in much smaller bands, outside of the mating season. In many hoofed herd animals, however, the males live in herds that aren't much smaller than those of the females - in other words, both sexes live in herds, but the two don't mix until it's time to do the necessary.

Clearly, these are creatures that benefit from the group protection that living in herds provides, and, while there's obviously a limit on how large a herd can be before there isn't enough food to support them all, it's not always so clear why the herds should be single-sex. Why, in short, do so many hoofed herd animals practice sexual segregation?

There are a number of theories, and, as is often the case, they aren't mutually exclusive. Nor is it likely that the reason - or the balance of reasons, if there's more than one - will be the same for every species. It's something we have to examine on a case-by-case basis.

One of the more popular explanations is the Sexual Size Dimorphism Hypothesis which suggests that, if males are much larger than females (as they often are in these species), they'll be looking for large quantities of food, while the females can afford to be pickier, and so look for smaller clumps of more nutritious plants. Inevitably, since they're searching for subtly different resources, the two sexes end up moving apart.

A variation on this suggests that, while differing body size is the key factor, it's more how the different sexes spend their time that matters. According to this theory, the males, who have to eat more, also have to spend more time sitting about and ruminating to digest it all, while the females are already wandering off to explore.

Or perhaps the animals' sizes aren't so relevant, and it's more to do with the inherent nature of being female. According to the Reproductive Strategy Hypothesis, females are looking for the best places to give birth and raise young, prioritising safety over other considerations, while the males, with no such concerns, just look for wherever the most food happens to be.

Markhor (Capra falconeri) are a particularly large species of goat, native to the mountains and foothills of the western Himalayas. They are notable for their huge, corkscrew, horns, which are particularly impressive in the males. They live in smallish herds of a dozen or so individuals, but, for most of the year, males and females do, indeed, live apart. Significantly, the males are twice the weight of the females, and, given that, like most goats, they live in areas where food is hardly abundant, they should provide a good case study to tease apart the possible reasons for their sexual segregation.

The problem with doing so is that they happen to live in area that's not exactly politically stable - a high proportion of them live in Afghanistan. Nonetheless, between 2007 and 2009, a team of researchers observed the markhor herds living on the mountain slopes north of the upper reaches of the Jhelum River in Kashmir, just a few miles from the Line of Control that separates India and Pakistan. (So, hey, kudos to them... this isn't really a much safer place than Afghanistan).

Leaving the political situation aside, the region is high altitude, ranging from 2.000 to 4,000 metres (6,500 to 13,000 feet) in elevation, with steep slopes dominated by fir trees at the bottom, fading out to alpine meadows higher up. The main local predators on the markhors are leopards, although golden eagles sometimes attack the younger kids.

The results of this investigation, with over 700 observations of markhor herds, showed that, after giving birth, female markhor stuck to the edges of rocky cliffs, while, during the same summer months, the males headed upslope to where fresh new vegetation was beginning to sprout. Thus, at this crucial time, it was the males who were hogging all the best food, with the females staying in the more barren terrain.

But, if you're a goat, cliffs are a great place to hang out if you're not too worried about the quality of the food - it's much easier for a goat to dash up a cliff, or hide among the rocks, than it is for a leopard to follow them. Which means that the females are prioritising the safety of their kids over the ability to feed them high quality food - better that they be alive and a little hungry, than that they be dead on a full stomach.

Which, of course, supports the Reproductive Strategy Hypothesis, and the conclusion is that that's the main driving force for segregation in markhors. However, it's not quite so simple, because the two sexes separated over a month before the females gave birth, and remained apart long after the kids were fully grown in the autumn.

During this time of the year, both sexes used the same sorts of habitat, near the bottom of the slopes, where the best food would be found once the upper slopes began to freeze. That makes sense, in view of the need for high quality nutrition in the run-up to winter, but it doesn't explain why, even while visiting the same general area, they still stuck to single-sex groups outside of the rut.

The answer may be nothing to do with either food or reproduction, at least directly: perhaps they just annoy one another, and that brings us to a third proposed explanation for sexual segregation. According to the Social Affinities Hypothesis, males in these species want to spend all their free time fighting to establish dominance, while the females frankly have better things to be getting on with.

Female markhors, perhaps, just don't want to put up with all that macho bullshit. Just fight each other, they may be saying, and leave us out of it.