The Pig Family: Threatened Pigs of the Philippines

When the animal we now know as the Sulawesi warty pig was first described, back in the 19th century, it was thought that it lived, not only on the island of Sulawesi, but also on a whole chain of islands to the north - the Philippines. But the pigs there didn't look exactly the same as those to the south, so in 1886, German zoologist Alfred Nehring proposed that they be regarded as a distinct subspecies.

And so things remained for a hundred years, until scientists began to look more closely at the animal's genetics. When they did so, they discovered something fairly surprising. Pigs typically have 38 chromosomes (compared with 48 in humans), but it turned out that the warty pigs from the Philippines had only 36 - an entire pair had disappeared, its genetic material shuffled around elsewhere in the genome.

As a result, and also bearing in mind the physical differences, the Philippine warty pig (Sus philippensis) was raised to full species status in 1991. We haven't really studied them much since, and very little is known about their biology. We can say that, compared with the Sulawesi species, they tend to be darker in colour, with a long mane of bristly hair that runs from the back of the head down the middle of their back. They four, rather than six, facial warts, with thick white bristles sprouting from those on their lower jaw, as well as a host of minor differences in the shape of the skull.

They live on the two largest islands of the Philippines, Luzon in the north, and Mindanao in the south, as well as on Samar, Leyte, and Bohol in between, and a few smaller islands in the general vicinity. Presumably omnivorous, they, like the Sulawesi species, live in just about every habitat that's available on those islands, from the seashore to the volcanic mountain slopes.

Or, at least, they used to. Today they are found only in the most remote of forests, which typically means those in the rugged mountain ranges, between around 1,000 and 2,000 metres (3,300 to 6,600 feet) elevation, although some particularly dense lowland forests harbour them here and there. Even these forests are declining in size, partly due to the expansion of agriculture - typically slash-and-burn in this part of the world - but also due to logging, much of it illegal.

It doesn't help that the pigs are considered pests on agricultural crops, so that farmers will go out of their way to kill them just to protect their own livelihoods. They are also eaten as bushmeat, mainly in rural communities, where their meat is said to command twice the price of regular pork. This hunting is, in fact, illegal, since the animals are protected under Philippine law, but there's little evidence that this law is really being enforced. A further threat comes from the fact that they are apparently able to hybridise with domestic pigs, which often wander around semi-wild, and thus at least risk breeding themselves out of existence.

While we don't know the exact population of these pigs, the estimate, based on how much forest is disappearing, is that about a third of them are likely to have vanished in the last twenty years - a timespan thought to represent three generations. Indeed, on the island of Marinduque, just south of Luzon, they have already disappeared altogether. This is sufficient to classify them as a threatened species, although they are at least widespread enough not to formally qualify as a full "endangered species".

The Philippine warty pig was originally considered to have three subspecies: one on Luzon, one on the southern and eastern islands, and one on the islands of Cebu, Panay, and Negros, in the middle of the chain. This third subspecies was, however, something of a puzzle, and, prior to the elevation of the Philippine pig to full species status in 1991, it hadn't been entirely clear what it was a subspecies of.

Perhaps most commonly regarded as a subspecies of the Sulawesi warty pig, partly due to the huge floppy mane in fully-grown boars, the fact was that it not only had fewer facial warts than they did, but they were also much smaller and less visible. Combined with the fact that it had a white stripe across the face where bearded pigs have their whitish beards, this led some researchers to conclude that it was more likely a subspecies of those animals instead. 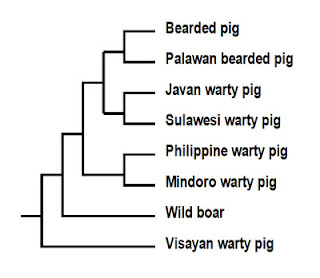 Between 1993 and 1997, however, we got a much better look at the exact genetics of the animal, and were able to finally solve the mystery: it's neither. We now refer to this animal as the Visayan warty pig (Sus cebifrons) and it actually turns out to be the most "primitive" of all the members of the genus, having diverged even before the other warty and bearded pigs separated from the wild boar of the Asian mainland.

These pigs appear to be fairly sociable animals, often seen travelling in groups when they are seen at all, and known to enjoy play-fighting. Although they have been successfully bred in captivity, in the wild they inhabit high elevation forests as far from humans as they can get. Where they really can't avoid humans they are, like the other native pigs of the area, nocturnal, but, also like the other species, it does appear that they'd much prefer to be out in the daylight if it weren't for the fact that so do humans.

These potentially fascinating animals are, unfortunately, faring considerably worse even than their cousins on the other Philippine islands. They have been extinct on Cebu since the 1960s, and on three of the smaller islands on which they once lived since no later than the 1990s. That leaves just a few tiny populations in the mountainous interiors of Panay and Negros, no longer able to communicate with one another, and thus losing genetic diversity - even ignoring the fact that, they too, are probably hybridising with stray domestic pigs. Those in captivity, as might be expected, are by now even more inbred.

A large part of the problem is that there is virtually no truly wild forest left on Panay or Negros, and so nowhere that the pigs would be happy to live. It's hard to know for sure, but our best guess is that the population of Visayan warty pigs has crashed to less than a fifth of its former level over just the last two decades, and stands on the verge of total elimination. Unlike its neighbours, therefore, this is not merely "threatened" but a critically endangered species.

1997 also saw the identification of a new subspecies of Philippine warty pig, restricted to the island of Mindoro, just southwest of Luzon. Four years later, it was promoted to full species status as the Mindoro warty pig (Sus oliveri). It was named on the basis of a few skulls and a pelt that showed distinct differences from the more widespread species, but the few photographs we have of them in the wild may actually be of hybrids, so we aren't even entirely sure what it looks like when it's alive, let alone anything else about its habits.

We can say that it seems to be found across the island, although, like its kin, it tends to restrict itself to the mountainous interior. That makes it widespread enough not to qualify as an endangered species, although its sufficiently rarely seen and its native forests are disappearing rapidly enough that it's unlikely to be faring well, and, like the Philippine warty pig, is considered vulnerable.

Warty pigs are not, however, the only wild pigs native to the Philippines. On the western side of the group, lying between Luzon and Borneo, we come to the island of Palawan, long recognised as home to a subspecies of bearded pig, otherwise native to Indonesia and Malaysia. It's distinguished primarily by being much smaller, perhaps as a result of insular dwarfism, and, in 2005, it too became a full species as the Palawan bearded pig (Sus ahoenobarbus).

The study which confirmed that also seemed to suggest that, despite the physical resemblance, the genetic evidence indicated that the animal might not be a close relative of the Bornean bearded pig at all, but rather the Visayan warty pigs of the islands just to the east. This seems a bit odd, and isn't generally accepted these days, despite the absence of a definitive refutation. One possibility is that the sample analysed were from hybrids of some kind, or that there was some breeding with other species in the distant past that's muddying the waters.

Although declining in numbers for the exact same reasons as the other known species, this one is just about common and widespread enough to avoid the label of "vulnerable species", and is provisionally regarded as merely "near threatened", at least until better estimates come along. This may well be in part because Palawan is rather less well developed economically than the other Philippine islands and has better preserved its native wilderness.

That leaves us with four native species of wild pig on the islands, but the story may not end there. It has, very recently, been proposed that even the two subspecies of Philippine warty pig that are still recognised may, in fact, be distinct species in their own right. In which case, those inhabiting Mindanao and its neighbouring islands could be split off as yet another species. So far as I can tell, there has been no formal publication of the evidence supporting this as yet, but it probably won't be a great shock if and when it comes.

With that, however, we can leave the islands and return to the continental mainland. Here, especially in Africa, there are many more species of pig to be found, and these are rather less closely related to the domestic sort...