Out of the Caves 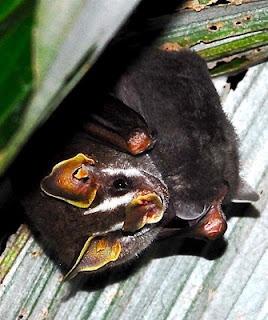 At least if you live in the northern, temperate, parts of the world, when you think of where to find bats, your first thought is likely to be "caves". A great number of bat species do, indeed, spend the day in caves, and this makes sense: if you're a nocturnal animal that doesn't need light to 'see', then caves are both reasonably safe places and ones with a constant, sheltered environment. Why bother trying to sleep in the wind and the rain, or even the bright sunshine, when you don't have to?

But, of course, by no means all bats are cave-dwellers. Amongst the various families of bat, the leaf-nosed bats (Phyllostomidae) of the American tropics are the most varied in terms of diet, and also in terms of their roosting habits and other behaviour. Sure, the majority of phyllostomid species do eat insects and live in caves, as most other bats do. But the group also includes some bats that feed on surprisingly large prey (such as birds) as well as the blood-drinking vampire bats.

It also includes a large number of species that are vegetarian, feeding on fruit such as figs, or subsisting almost entirely on the sugar-rich nectar that they drink from year-round tropical flowers. Many of these fruit-eating species do not live in caves at all, but simply roost in trees - as do the much larger fruit bats of the Old World

Sometimes, "roosting in trees" means that the bats find trees with large hollows in the trunk, and roost inside of those - not so different from a cave, albeit much smaller. Others, however, use trees, and these include a few species that carefully construct tents under which to shelter, chewing away at the leaves and then folding them into a suitable shape. While these are the most famous and well-studied of such foliage-dwelling bats, most species don't go that far. Instead, they either find trees with exceptionally large leaves to shelter beneath (palms, for example) or those with dense enough foliage to hide them. In the tropics, neither of these are in particularly short supply.

While trees are much easier to find than caves, especially in the middle of a tropical jungle, there are some downsides to this behaviour. Most obviously, there's the fact that you have to put up with the weather, and that even dense foliage might not make things quite as dark as you might like. But there's also the fact that leaves and twigs can only support so much weight before snapping, and that trees have a limited size. These latter factors, for instance, tend to limit the size of roosting colonies with knock-on effects for bat sociality.

Given that the majority of even phyllostomid bats do, in fact, live in caves, it seems plausible that this was the original mode of life for the group, and that tree-dwelling evolved later as an alternative solution for those fruit-eating bats that quite liked the idea of a nearby food source. But is this true, and, if so, did it happen once, or multiple times, in different sub-groups? And is there anything else that these bats have in common that their cave-dwelling kin do not?

There have been previous attempts to answer these questions, although mainly in regard to tent-making in particular, and, in any event, our broad knowledge of the pattern of bat evolution has improved quite a lot in recent years. So, armed with a modern understanding of the phyllostomid family tree, it's perhaps time to answer the question again - say, by re-examining over a thousand reports of bat behaviour in 48 different species and comparing the results.

As one might expect, one of the first findings of this review was that things are not always clear-cut. For example, the flat-faced fruit bat (Artibeus planirostris) lives in caves in the scrublands of eastern Brazil, but amongst the trees where it is found in the depths of the Amazon. Presumably, it's not very particular about where it spends the day, and uses caves where suitable trees are less common. 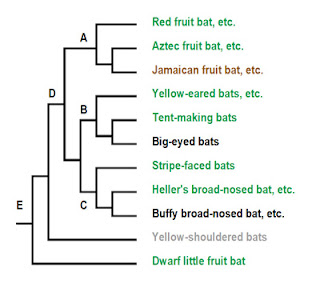 How the roosting patterns fit into the family tree of the fruit-eating leaf-nosed bats is shown in the diagram to the right. Names in green are of foliage-roosting bats, and those in black of bats that roost in caves. The group in brown contains some cave-dwelling species, but consists mostly of the bats that don't seem to care, and can be found in either location, while that in grey consists of bats that prefer tree hollows. (Obviously, since the full tree consists of 48 species, this is a greatly simplified version, but the overall pattern is the same).

What does this tell us? Well, what we can use here is a concept called phylogenetic bracketing. This means that if we see a particular trait occur on one branch of a family tree, while all the branches around it belong to animals with a different trait, it's likely that that that second trait is the original one, with the other having appeared later.

For example, let's look at the branch of the tree I have marked with a 'B'. Here we see that one of two things might have happened. Firstly, it could be that the ancestors of this group lived, like most bats, in caves, but then both the yellow-eared bats (Vampyressa spp.) and the tent-making bats (Uroderma spp.) independently moved to the trees, while the big-eyed bats (Chiroderma spp.) remained where they were. Or, secondly, the ancestors already roosted in trees and the big-eyed bats alone changed their habits, moving into caves.

The first option involves the same habit evolving twice, while the second involves only one change. This doesn't prove that the second option is the one that actually happened, but it does make it quite a bit more likely - it's the simplest explanation, and therefore the one we prefer.

In this case, we can see that this implies that the ancestral bats at A, B, and C were likely all tree-dwellers, and therefore, in all probability, so was the bat at D. The yellow-shouldered bats (Sturnira spp.) typically roost in cavities within tree trunks, and not in proper caves, and so are somewhere in between the other two habits, but, looking at the overall pattern, it seems likely that the ancestral bat at E was also a tree-dweller.

The conclusion then, is that leaf-nosed bats evolved to live in trees just once, probably at the same time they switched to eating fruit, but that some of the descendants of those bats subsequently changed back the cave-dwelling habits of their even earlier ancestors. Which leads us to ask if there is anything else that those bats have in common?

Well, for one thing, it turns out that the sorts of bat that go as far as to construct tents from the leaves they shelter beneath are, on average, noticeably smaller than others, probably because the tents would collapse under their weight if they weren't. Another possible difference, however, relates to the bats' appearance.

Leaf-nosed fruit bats in general tend to have diagonal white stripes of fur running across their faces, something not commonly seen in other leaf-nosed bats. In four of the larger sub-groups, however, these stripes are either much fainter, or missing altogether - and three of those groups just happen to be the ones that most commonly live in cavities (either caves, or those in trees).

The implication here is that the facial markings help to camouflage the bats in some way, and are unnecessary if they live in the dark where they cannot easily be seen anyway. This may be supported by the fact that the fourth major sub-group to lack the stripes has bright white spots on the shoulders instead, which may have a similar function. (A few individual species also lack both stripes and spots, however, for reasons that are less clear).

The evolutionary history of bats is a bit of mystery, since they have light-weight, fragile, bones that don't fossilise well. So we don't know for sure when some of the cave-dwelling insect-eating bats of the Phyllostomidae switched to eating fruit, and began to move out to the trees where such meals were more readily available. But, while other groups of bat have doubtless done the same elsewhere, in this particular family, it seems to be something that they only did once.