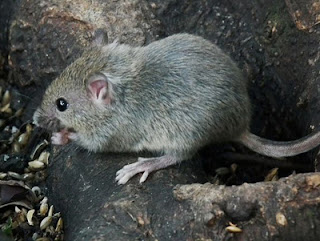 Over the last few years, I have done a roughly annual series covering particular groups of mammals, exploring all the different species, familiar and unfamiliar, that belong to them. (If you haven't read the past ones, the link "Synapsida Series" points to the list of them; note that the individual posts appear in reverse chronological order once you select a series to view). One problem with selecting which groups to cover in a given year is that only some groups will really work, and, even then, some are clearly better than others.

One problem, for example, is that some groups are simply too large, and if you split them down into narrower groups that are more easily handled, there's no longer enough variety for it to be worth it. Such is particularly true of small mammals. There are over 700 species in the mouse family, for instance, with over 500 of those in the "murine" subfamily, which includes all of the familiar ones. Even if it would be practical to describe them all, most of the individual species haven't been studied in any detail, so you'd rapidly get a long list of "looks mouse-like, lives in XX".

To take a random example, almost literally the only thing we know about the Gounda mouse (Mus goundae) is that the only ones we've ever found live on the banks of the Gounda River in the Central African Republic, and looked just sufficiently different from other local mice to be named as a species when they were discovered in 1970. Presumably, other than that, they're fairly regular mice, but who knows?

So, in order to take a good look at small mammals, rather than the large, charismatic sort, I need some filter other than mere taxonomy. The filter I am going to use is the United Kingdom.

Britain consists of two large islands, and a number of small ones, off the northwest coast of Europe. This is significant because the English Channel and the North Sea make an effective barrier that prevents most land-based mammals, other than bats, from crossing over easily. Since Britain is also quite densely populated by humans, and has been for a very long time, this means that the total number of wild mammal species still found on the islands is not great, even in comparison to France or Germany, let alone, say, the United States.

So, this year, I'll be looking at all the small non-flying mammals native to the UK. I'm excluding the bats, because there's too many of them, and I'm not going to really look at members of the weasel family, because I've already done those. Which, to be honest, mostly leaves rodents, but there you go. Note also that I'm not going to be looking at the animals specifically in relation to the UK, but how they are found worldwide, and I'll be trying to put them in a broader context as well.  (And, for what it's worth, there are no mammals native to Ireland that aren't also native to the UK, so I'm not really ignoring that country). It's just a means to cut down on the number of species I have to describe and to ensure that the ones I do pick are likely to have been well-studied.

I'm going to start with an animal that surely just about everyone reading this blog must have seen in the flesh at some point or another: the house mouse (Mus musculus).

The native habitat of house mice today is, to a large extent, artificial structures - be they houses, farm buildings, or just about anything else we happen to have built that might have food in it. Because house mice are good at sneaking onto ships, they are found worldwide, including some remote sub-Antarctic islands. Having said that, they are uncomfortable in dense forests, and can't survive well in true deserts or on freezing mountaintops, so there are extensive parts of the world - mostly in Africa and South America - where they aren't really found outdoors, something that naturally limits their spread.

Because they have spread wherever humans are found, it's difficult to know the exact limits of their original, prehistoric range. So far as we can tell, however, they were found in the wild throughout pretty much the whole of Europe and Asia, aside from northeast Siberia, across Africa north of the Sahara, and possibly parts of East Africa as well. Based on their genetic variability, however, there is some evidence that the species first evolved somewhere around Iran, before spreading across the continent.

The exact number of subspecies is unclear; there are at least four, but figures of around 60 have been quoted in some sources. Much depends on how willing you are to count house mice that live solely in human habitations, rather than in the wild, since these can have a complex genetic history. For example, genetic studies on the house mice of Japan have shown that they are hybrids of two wild subspecies, otherwise native to eastern Europe and southern Asia. That's presumably something that happened in the last few centuries, but does it count as a new subspecies or not?

In Europe, there are two widely recognised subspecies: M. m. domesticus in the west, including Britain, and M. m. musculus in the east (and in many parts of Asia). While they are overwhelmingly commensal with humans, which is to say that they eat our scraps and agricultural produce, smaller populations do also live in the wild. The latter actually seem to have longer lives, likely due to the absence of cats and rodent exterminators, and breed mainly in the spring and autumn, when food is most abundant. Commensal mice compensate for their riskier lifestyle by breeding like crazy all year round, and don't seem to move around much, sticking to a good patch of housing once they've found it.

Where they are found outdoors, irrigated fields are a favoured habitat, and, further from human habitation, river banks and bogs seem to be preferred. These then, are likely where they lived before humans started farming and constructing large buildings. True omnivores, a high proportion of their wild diet seems to consist of invertebrates, despite their propensity for eating grain in agricultural land.

Wild-living house mice are territorial, with each patch of land dominated by a single male that does most of the breeding. Females are apparently free to move around between territories and often do so, but are inclined to drive away other females to ensure they have enough land to feed their young. In commensal house mice, while the male still drives away rivals, there is so much food to be had that, not only are males' territories smaller, but the local females don't bother to fight, and may even help raise one another's young.

Based on genetic evidence, the closest living relatives of the house mouse are thought to be the mound-building mouse (Mus spicilegus) of the eastern Europe steppe and the Macedonian mouse (Mus macedonicus) of the southern Balkans, Anatolia, and parts of the Middle East. All three are also closely related to the Algerian mouse (Mus spretus) which lives in open grassland from Libya to Morocco, throughout most of Spain and Portugal, and even into southern France.

These other species tend to be more purely herbivorous than the house mouse, and are only ever found outdoors, seeming to avoid anywhere with too many humans, perhaps due to competition from their commensal relative. Since they tend to prefer drier habitats, they don't interact too much in the wild, either, although there are some places where both can be found outdoors. The mound-building mouse, of course, is also notable for, well, building huge mounds of vegetation, something I've discussed before.

Slightly further out on the evolutionary tree, there are literally dozens of other mice in the genus Mus, native to various regions across Asia and Africa. None of them are found in Britain, but many other species of mouse exist, and some of them are native to the islands. Next month, I'll be looking at a couple of them...