Murderous Whales of the Eocene Oceans 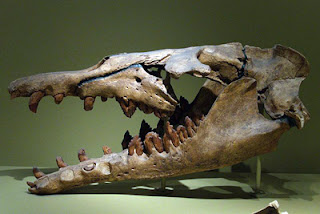 At the top of the pyramid are the "apex predators". These are the carnivores that have no predators of their own, that are able to feed without fear of being eaten themselves. Again, the reality is more complex - an adult of one apex predator might occasionally kill and eat the young of a different kind, for instance. And, of course, everything gets eaten by worms (or whatever) once they're dead. Nonetheless, really big scary predators clearly do exist, even if, by their nature, they aren't very common.

Lions and wolves are perhaps the most obvious examples amongst mammals, although there are many others. In the oceans, though, the most fearsome mammalian apex predators of the modern day are probably killer whales (Orcinus orca). By no means the largest of the whales, and more accurately described as overgrown dolphins, these achieve their apex status by, among other things, their ability to hunt in packs. That enables them to take down prey even larger than themselves - as wolves also do - including other whales. And, if you've ever wondered who would win in a fight between killer whales and those other apex predators, great white sharks... it's not so good for the fish.

While the modern species is probably not all that ancient, killer whales in general have been around for at least 3.5 million years, and probably longer. The oldest definitively known species, Orcinus citoniensis, is about that age, and is known from a reasonably complete skeleton found in Italy, as well as some teeth from British deposits. That's well before the start of the Ice Ages, but still not very far in the grand scheme of mammalian evolution. So were there similarly deadly mammalian apex predators in the seas earlier than that? Or did sharks back then have it all their own way?

Much depends on just how far back you want to go. Some early sperm whales, for instance, looked decidedly fearsome. Go back even further than that, though, and we reach a time before any of the modern sorts of whale existed. Even then, though, there were animals that could reasonably be described as 'whales', and some of them certainly seem large enough to have been apex predators.

Among them is Basilosaurus, which swam in the oceans of the Late Eocene. It died out about 34 million years ago, and seems to have been the largest mammal that ever existed at that time - a title it probably held for another 20 million years or so, until modern sorts of whale came along. In fact, it was about 17 metres (55 feet) long, similar to a modern sperm whale, albeit much slimmer and so presumably not as heavy.

In a number of ways, however, it was very different to modern whales. One of the main differences, for instance, was that it still had canine teeth, molars, and so on, rather than the row of essentially identical teeth seen in all living forms. In fact, it's among the very earliest whales we know of to be obviously whale-shaped; apart from a few close relatives, all earlier whales still had hind legs.

So a huge sea-going animal with fearsome looking teeth... surely a contender for one of the apex predators of its day. It's hard to imagine that anything much could have eaten it, at least once it was fully grown, but what did it eat? Truly vast quantities of prehistoric mackerel or the like, or something that might put up more of a fight?

Today, the fossil site of Wadi Al Hitan is a dry gully in the bare sandy desert southwest of Cairo. 37 million years ago, however, it was covered by a shallow sea. Fossils recovered from the site include an awful lot of fish, as one might expect, but also turtles, sea snakes, crocodile-like animals, and a number of marine mammals.

Among the latter are the remains of a specimen of Basilosaurus isis - the marginally smaller of the two known species of Basilosaurus - that have recently been described. The individual in question seems to have died peacefully, so far as we can tell, falling intact to the sea floor where its bones were scavenged and moved around, presumably by sharks. As a result, while almost the bones are present, and close together, the original shape of the animal has been lost. But even so, there is a fair bit we can tell from them.

For one thing, there's the teeth. These are worn down in a number of places, showing that the individual was a reasonably old adult, as we would also expect from the sheer size of the other bones. But what may be more significant is the other animal remains that were found nearby.

Some of these were found inside the lower part of the whale's chest cavity, where we would expect the stomach to have been. Others were scattered nearby, in closely packed clusters that suggest they may have been washed away a short distance after the whale decomposed, and so are also interpreted as stomach contents - that some of them have obvious bite marks on them consistent with the whale's teeth tends to support this interpretation.

They represent two different kinds of animal, that may represent some of the last meals eaten by the whale before it died, direct evidence of its diet. One of these animals was Pycnodus, a fish with no particularly close living relatives. It would have been about 1 metre (3 feet) long in life, and so was hardly what you'd call a small fish, especially since it had the sort of circular body outline seen in modern angelfish, rather than being long and thin. It was noted for having wide and flattened teeth, ideal for crushing the shells of clams or other large shellfish.

The other, with bones from multiple different individuals, was Dorudon atrox. This was not a fish; it was another whale.

Dorudon was itself a relative of Basilosaurus, similar in many respects, but noticeable smaller, at around 5 metres (16 feet) fully grown, and it, too, would have been a carnivore, having some impressively sharp teeth. In this particular case, however, the Dorudon specimens were quite a lot smaller than that, with even the largest being estimated at no more than 2 metres (6 feet), and the teeth appear to have been milk teeth.

In other words, it looks as if this Basilosaurus had been eating the young of other whales. In fact, the fossil site has revealed a number of fossils of relatively intact young Dorudon, along with adults, suggesting that it may once have been a calving ground for the whales. In contrast, no young Basilosaurus have been found there, so they may have been there purely to feed.

It's not the first time Basilosaurus has been implicated in eating other whales, since some juvenile Dorudon fossils with suspicious bite marks have been found before. But it is the first time we've found them in actual stomach contents, making the evidence more than merely circumstantial.

Today, the killer whale is the absolute largest creature to regularly feed on warm-blooded animals. There was once something quite a lot bigger.

[Photo by "Amphibol", from Wikimedia Commons.]
Posted by JK Revell at 15:29