Requiem for a Dolphin 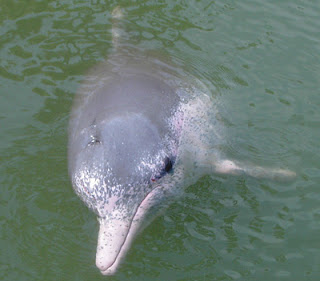 Dolphins are social animals, living in pods and engaging in what seems to be fairly sophisticated communication. It's likely that such behaviour is part of the reason for their success, with well over 30 species spread across the world's oceans... and that's excluding porpoises, and some other "dolphin-like" animals outside the dolphin family proper.

Sociability involves a number of different traits and behaviours, but one that's known to exist in cetaceans and relatively little else, other than primates, is what's technically known as epimeletic behaviour. This is, in essence, the act of helping other members of your species when they are in trouble, typically due to an injury of some kind. (For what it's worth, this compares with etepimeletic behaviour, which is acting in such a way as to make it easier for others to care for you).

The extreme case of epimeletic behaviour, in which it has become dysfunctional, is attempting to care for an individual that's already dead. While also observed in some other species, this is most commonly seen in primates, and it is known in cetaceans, too, perhaps being easier to observe and identify than shorter-term caring behaviour, at least in the wild. It has been reported in many different dolphin species, including the familiar bottlenose dolphin (Tursiops truncatus) so common in dolphinaria, along with, for example, Atlantic spotted (Stenella frontalis) and long-beaked common dolphins (Delphinus capensis).

In some cases, we are talking here about a single distressed individual trying to help another - a mother trying to help her calf, for example. But, being the social animals that they are, sometimes whole groups can be involved.

For example, one case involved a number of bottlenose dolphins coming to the aid of an injured female that was struggling to reach the surface and breathe. They ultimately failed to save her, but not through lack of trying; up to five individuals offered direct support, at one point forming a raft to lift her clear of the water, with many more milling about nearby, and perhaps taking over from others during the 10 hours of the ordeal.

There may, of course, have been a number of visual and other clues that the sick dolphin was in trouble. But, as one might expect, auditory communication also played a significant role, with the assisting dolphins clearly motivated by distress calls from their partner. The calls in that instance can fairly be translated as "help!" but there are also other reports that mention calls between the dolphins trying to provide assistance, and these may well be conveying something more complex.

The exact status of the Chinese white dolphin (Sousa chinensis) has proved somewhat complex over the last few years. For much of the 20th century, the scientific name was applied to all of the humpback dolphins inhabiting the Indian and Pacific Oceans (there's a second species in the Atlantic). In 2004, it was questioned as to whether the types in the two oceans might represent separate species. Detailed DNA analysis followed about ten years later, with the conclusion that... um, there's probably three species.

Since what had formerly been known as the "Indo-Pacific humpback dolphin" had first been described from an individual caught off the coast of Hong Kong, it was this eastern version that got to keep the scientific name, and which is named in most modern sources as the Chinese white dolphin. It lives as far east and north as Taiwan, but the other edges of its range - where it meets the two 'new' species - are less clear. It certainly lives around the whole of Southeast Asia and parts of Indonesia, but exactly which parts isn't obvious, and neither is the status of the humpback dolphins off the coast of Bangladesh.

In 2014, a group of around 20 Chinese white dolphins were spotted swimming in the northern coastal waters of the Gulf of Tonkin, near the Chinese city of Beihei. One of the dolphins was attempting to support a dead calf, keeping it above the water as if to allow it to breathe, and managed to do so for at least four hours before the group moved out of view of the following boat. We can't know what tragedy had led to this situation; the calf was about the size of a newborn, but had a number of scratches on the body, suggesting that it wasn't simply a stillbirth. The other dolphins in the group stayed close by but did not try to interfere.

This prolonged behaviour by a single individual, who would have been unable to feed while it was going on, tends to rule out some of the more prosaic explanations that one could come up with, such as a dolphin simply playing with some object that they'd found, without any true understanding of what it was. Instead, this appears to be genuine - if misguided - epimeletic behaviour, with the presumed mother willing to go to some lengths to help her calf, and other dolphins tolerant of that. That they didn't help, simply staying nearby, may simply be because the carcass was small enough that it would have done little good even if the calf had still been alive; they would only have got in the way.

This is an unusual observation in this particular species, although that may simply be because it isn't a very common animal. But the general details don't seem too different from those previously reported in other dolphins. What's different, though, is the detailed observation and recording of the calls made by the dolphins involved.

Almost 200 whistles were recorded from the group during the four hours of observation, with the dolphins repeating some of them on a loop. These were not, however, normal calls, lasting longer, and having a more complex structure, than in previous recordings of this species. Furthermore, looped repeating whistles are also very unusual.

In fact, repetitive loops of the same sound are generally unusual in dolphins. Perhaps significantly, one of the few other times that they have been recorded being widely used was in a group of bottlenose dolphins being captured and released as part of a study off the coast of Florida. On that occasion, the 'looping' seemed to be a result of the stress of the capture itself and was particularly intense (and high-pitched) if the captured individual was a mother with a calf she wanted to get back to.

We can't, of course, prove that the same thing was going on here, but it's certainly suggestive. The presumed mother with the dead calf was distressed and perhaps even in a state that, in humans, we might describe as frantic. The length and complexity of the calls also suggest that there was quite a bit either she or her companions were trying to convey to one another. Some matched the kind of "signature whistle" that bottlenose dolphins apparently use to identify one another, something that has not previously been reported in Chinese white dolphins. If these really are the same as in bottlenose dolphins, it would make sense, perhaps helping to bond known relatives together in the face of some adversity.

We don't know what was going on in the heads of these dolphins, but the fact that they were making calls not typical of their species indicates that they recognised the situation as unusual, and probably one that was stressful for them. The fine details of dolphin communication remain a mystery to us, but it's certainly something that seems very significant to them, and that conveys more information than we can directly perceive.

[Photo by "takoradee", from Wikimedia Commons.]
Posted by JK Revell at 15:21