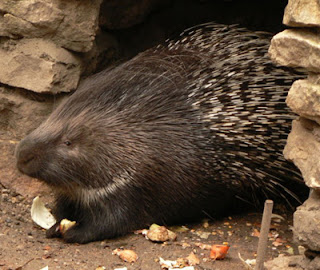 Many of the questions related to sleep are physiological, rather than strictly behavioural. How often does the animal sleep? How long for, and at what time of day? How does this affect its metabolism? Does it dream? What's the point of sleep, anyway? But some questions we might want to ask are at least partly behavioural. For instance, does the animal want to sleep alone, or huddled up with others of its kind?

And what posture does it adopt when it does so?

This, as with our snoozing dinosaur, is not a question that has received a lot of attention from scientists. To some extent, the answer depends on the animal's anatomy. A hippo would probably find it hard to sleep on its side without rolling over, most four-legged animals would find sleeping on their backs rather awkward, and a kangaroo would probably have difficulty sleeping on its front.

But other factors also come into play. For instance, there's the question of what the animal happens to be sleeping on. Sleeping in a cramped burrow, or on a tree branch, will lead to different postures than simply using a flat piece of ground - and that's without even considering animals that sleep hanging from a tree branch or from a piece of cave roof. If you want to sleep cuddled up with other animals in your pack, you probably don't want to stretch your legs out too much, even assuming that you can.

Sleeping in a position that you can easily get up from if awakened is also relevant for any animal that's likely to be attacked. In this context, it's interesting to note that at least some domestic animals are less likely to be cautious than their wild counterparts. Furthermore, horses, for example, can sleep standing up, due to the way that their knees lock even when their muscles are relaxed. This can make it difficult for human observers to even be confident that such animals even sleep at all (although they do).

However, the reason that I say that sleep posture is only "partly behavioural" is that, for some animals, physiology may also play a role here, too. One possibility, in particular, is how it might affect the ability of certain herbivores to digest their food.

Dedicated mammalian herbivores typically have one of two approaches to digesting food. (This excludes those animals that feed mainly on fruit, or something else that's already highly nutritious and easy to digest). One option is to have an enlarged caecum, a sort of fermentation chamber located at the start of the large intestine. This is the method used by horses and rabbits, among others, and sleeping posture really shouldn't affect it all that much.

The alternative is "foregut fermentation" in which the vegetable matter is fermented before it enters the intestine, usually in a multi-chambered stomach of some kind. This is the approach seen in cattle, sheep, and various related animals, and also (with some modification) in kangaroos. The problem here is that, at least in true ruminants such as cattle, this system relies on gravity, sorting out the fluid from the more solid matter.

Which would presumably be a problem if we ever put cows in space (but not pigs, as they aren't ruminants). But, moreover, it may well limit how the animals sleep, in that they'd presumably want to do so the "right way up", lying on their front, rather than on their side. It's worth noting, for instance, that newborn calves often sleep on their sides, but switch to the more "adult" posture as their stomachs develop. There's little need to sort out the solids from the fluid when literally the only thing you're digesting is milk...

So, we might expect adult ruminants to sleep either standing up, or lying on their fronts, while rabbits, for example, don't have such a limitation. But there are a great many variations in exactly how herbivorous digestion works, beyond the simple foregut/hindgut options. Camels, with a three-chambered stomach, might be expected to behave similarly to "true" ruminants with four chambers, but what about kangaroos - foregut fermenters that don't ruminate? For that matter, while it may not affect rabbits, it's not immediately obvious that there aren't any other hindgut fermenters that do need gravity to sort out the food particles in their caeca.

In light of which, some researchers decided it was high time to head out to the local zoo, and take a good look at how the various kinds of animals there went to sleep.

As expected, the ruminants in the study, which included bison and antelopes, all rested (whether fully asleep or otherwise) either while standing up or while lying down on their fronts. Camels and llamas did, on occasion, sleep on their sides, although it's clearly not something they do very often. That they can do it at all may suggest that they don't need to be digesting food quite as constantly as the "true" ruminants, but, in general, the rule seems to be the same whether an animal has a four-chambered or three-chambered stomach.

Horses, however, as one would expect, typically rest while standing up so that they can at least keep an eye on the horizon, although when they do lie down to sleep, they usually do so on their fronts. It has been suggested that it's quite difficult for a horse to breathe while lying on its side, which would force them to adopt the more vertical posture regardless of what their digestive system is doing.

Nonetheless, at least according to this study, they do lie down sideways much more often than camels do, with mountain zebras (Equus zebra) doing so around a quarter of the time. So clearly they can, and for some it isn't even that uncomfortable. Rhinos and tapirs, which have much the same digestive system as horses, seem to behave in a similar fashion, preferring to rest front-down, but, unlike the ruminants, at least capable of lying on their sides if they want to.

Elephants, on the other hand, while they typically rest standing up, actually seem to prefer sleeping on their sides when they do lie down. It's actually surprising that they can sleep standing up at all, given that their legs don't lock as those of horses do, although they do often lean on a suitable support if they can find one. There is also some evidence that they lie down more as they get older (maybe their joints get stiff) and, in the opposite situation to horses, it's thought that doing on their chest would make it hard for them to breathe... although apparently not impossible.

Elephants are, like horses, hindgut fermenters. But there are some non-ruminants that ferment food in their stomachs. Kangaroos, unsurprisingly, normally sleep on their sides or in a crouching posture, since their general shape would make lying on their fronts impractical at best. They are also capable of, like many humans, sleeping on their backs, although this isn't common. In any event, given their lack of alternatives, it's not surprising that they have evolved so that this doesn't cause them any digestive inconvenience.

Interestingly, the study showed that peccaries always sleep lying on their fronts, despite not being ruminants. As I've discussed before, the peccary stomach is rather peculiar, and exactly how it works is unclear. Since their overall shape is not very different from that of pigs, and pigs can lie on their sides, this might be evidence that they really do sort food in their stomachs using gravity, although this has never been proven, and there may be other reasons that aren't immediately apparent.

Finally, there's the question of porcupines. (You knew I was going to get round to them eventually, right?) Porcupines, like other rodents, are hindgut fermenters, with only a single stomach chamber. However, they still need to sort out the more solid, less digestible chunks from the good stuff. Also like other rodents, they do this using a mucus trap in their colon. But, along with some of their relatives, such as coypus and capybara, they do this using a groove running along one side of their bowel, and that's something that could potentially be affected by gravity.

It turns out that porcupines, coypus, and capybara all prefer to sleep on their fronts. Now, it's possible that there are other reasons for this. For instance, being smaller than the other animals in the study, coypus and capybara might have more to fear from predators, and prefer a position from which they can leap into action as soon as they wake. Granted, not a lot eats porcupines, because they can inflict a painful injury on anything that tries. But, in their case, the spines themselves might make certain sleeping positions less comfortable, which could well be a factor.

Even so, it seems that nobody in the scientific community had really looked into the question of how porcupines sleep before, with just the occasional mention if somebody happened to draw or photograph one snoozing. Are they compelled to sleep on their fronts by their anatomy or by the need to digest their food effectively? Or some other reason? Those are questions we can't yet answer, but there's at least a hint here that something more may be going on the porcupines' colons than we realise. Even when they're awake.

[Photo by Peter Halasz, from Wikimedia Commons.]
Posted by JK Revell at 15:00