Whatever we call it, the cat was first described, in 1776, by the Prussian zoologist Peter Simon Pallas, in his account of his first expedition across the Asian reaches of the Russian Empire. He first identified it south of Lake Baikal, in south-central Siberia. We now know that the cat is far more widespread than this, being found not only throughout Mongolia and the surrounding regions, but across Central Asia from Kazakhstan to Iran and Azerbaijan, and along the line of the Himalayas from Kashmir through Nepal and Tibet to central China.

While this area is large enough, and often remote enough, that manuls are not considered a threatened species, they are never particularly numerous in any given locality. Indeed, the worldwide population was estimated as being around 15,000 in 2016, with most of them in Mongolia. This is low population is due to most of its range having a fairly barren landscape - part of the reason why there is no dense human population across much of it, either.

Specifically, the preferred habitat of manuls ranges from high altitude steppeland to semi-desert. While it's nowhere near such a mountain-dweller as the larger and more famous snow leopard, it can be found at altitudes of up to 5,000 metres (16,000 feet). They particularly like rocky areas, because these provide sheltered crevices in which to sleep, although they'll steal a marmot burrow instead if they can find one. On the other hand, they don't like deep snow, finding it difficult to move across, and so avoid anywhere where such conditions are likely in winter. 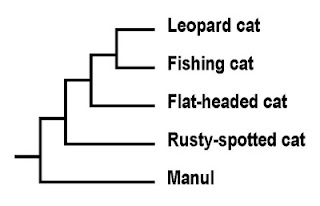 We really don't know that much else about them, with study of the species only really having taken off in the last couple of decades, and then largely to investigate their susceptibility to parasitic diseases such as toxoplasmosis. They seem to be less nocturnal than many other cats, hunting mostly in the early morning or at dusk. Not adapted to fast running, they instead use the cover provided by the rocky terrain to leap out on pikas, marmots, small rodents, and ground-dwelling birds such as partridges.

Given the barren nature of their native habitat, it's unsurprising that manuls tend to wander widely, and that they spend much of their lives alone. Possibly the only study so far to have really looked into the issue concluded that they have no real social structure beyond the fact that each male mates with a number of neighbouring females. So far as we can tell, they tend to use the same shelters year-round, including for giving birth to their kittens. In captivity, they can mate only between January and April, although the breeding season may be even shorter in the wild, where local weather conditions will be more of a concern. This affects both males and females and is driven, as one might expect, by the change in day length. Pregnancy lasts around 9 or 10 weeks, slightly longer than in the similarly-sized domestic cat.

The thick fur of manuls makes them look somewhat larger than they actually are, but this is certainly not true of the rusty-spotted cat (Prionailurus rubiginosus) which has short, slightly reddish fur, marked with rust-coloured spots. In fact, it's one of, if not the, smallest species of cat, with females weighing only around 1.1 kg (2.4 lbs) and males not much more than this; that's less than a third the weight of the typical domestic animal.

First identified near Pondicherry in 1835, rusty-spotted cats were for a long time known only from southern and central India, plus a couple of subspecies found in different parts of Sri Lanka. In 1975, however, an individual was discovered living all the way up in Kashmir, and more recently, there have been reports from Rajasthan and Nepal. These suggest that the cat may be more widespread than previously thought, found throughout much of the region except for the northwestern deserts and the Bengal area.

The uncertainty may be partly due to it being frequently mistaken for an immature domestic cat (or vice versa) along with secretive, nocturnal habits and, most likely, a scattered distribution with a low overall population. Indeed, it's another species about which we know very little, at least as concerns its habits in the wild. However, like the manul, there are a few in zoos, and we can at least observe those.

One thing that we do know from the wild is that the preferred habitat of rusty-spotted cats appears to be dense forest, but they are also found close to agricultural land and, in particular, tea plantations. That they're so rarely seen, however, would seem to suggest that extensive tracts of agricultural land - of which there are obviously plenty in densely populated India - from a barrier into which they are reluctant to venture, keeping the modern populations apart.

Observations of captive animals show that they are highly active, spending a lot of time rapidly pacing their enclosures, and happy to climb trees, cage walls, and the like. How this relates to behaviour in the wild is less clear, although heading up trees for defence would make sense, even if they mostly hunt on the ground. Their calls are reported to be very similar to those of domestic cats. They apparently give birth in hollow logs or similar shelter, and have litters of no more than three kittens at a time, initially born without the spots.

Elsewhere in Asia, however, there are some other "small" cats that are much larger than any house cat, and which form part of a lineage that has also successfully colonised North America. It is to those that I will turn next...