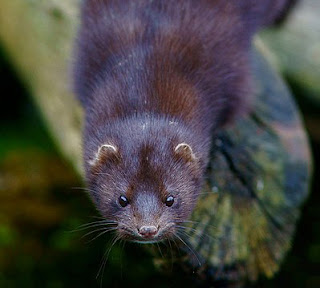 All of this is true, and often a cause for concern. But the thing is, there's an opposite problem too: invasive species.

Exact definitions can vary, but there are probably at least nineteen non-native mammal species currently living wild in Europe. These include animals from the Far East, such as the sika deer, and from the Americas, such as coypu and raccoons. Rather more exotic examples include the "barbary apes" of Gibraltar which seem to be a relatively recent import from Africa (although how recent is unclear, since they may have been extirpated then reintroduced more than once) and, perhaps most bizarrely of all, red-necked wallabies, which currently live wild in some parts of the UK.

The wallabies are fairly harmless, and so don't necessarily count as "invasive" species, but some of the others can pose significant problems to the local ecology, which simply isn't adapted to cope with them. According to one 2013 study, two of the "top ten invasive species" in Europe are mammals (the only other vertebrates on the list are a bird and a fish; three more are plants). However, one example that tends to garner a fair bit of attention is the American mink (Neovison vison).

American mink are now widespread across northern Europe, from Ireland to Finland, and are also found in Italy and Spain. They were first introduced to Britain in 1929 as part of a fur-farming project, and enough of them had escaped by the late '50s to establish a viable, and growing, population. Although mink farming was banned in Britain from 2003, and was hardly a big industry by that point anyway, the wild population was by then found in suitable habitats across virtually the whole of the mainland and a number of offshore islands.

American mink do, without a doubt, pose a risk to native British wildlife. They are a threat to a wide range of birds and directly compete with both the native European mink and the local otters. Arguably the biggest concern, however, is their devastating effect on the British population of water voles. Over the last few decades, water voles are said to have disappeared from well over 90% of sites where they used to be found, and, while there are doubtless some other reasons for that as well, American mink are probably the most significant.

In order to conserve the local population of water voles, therefore, we need to do the exact opposite to the American mink.

You might think, given our ability to wipe out wild animals without even trying, that doing it on purpose wouldn't be all that hard. But it can actually be very difficult, especially if we want to ensure that we only get rid of that one species that we're after without harming anything else.

The obvious way to extirpate mink from Britain would be to kill them, which obviously raises the question of how to do that humanely, even before we get to the issues of cost, safety, and efficacy. It's been illegal to hunt mink with dogs since 2005, since they are covered by the same law as foxes. But given that it doesn't seem to have worked when it was legal, that's unlikely to have made much difference.

This leaves us with the option of trapping the animals, and then dispatching them as painlessly as possible. This has, in fact, worked in the Western Isles, where American mink have been successfully eradicated (much to the delight of the local bird population), and it's also the reason that, despite their presence elsewhere in Europe, there are no wild coypus in Britain. This is expensive, to be sure, but it's probably cheaper than just leaving them there and clearing up the damage they do... especially if it's the only way to save the water vole.

There have been some recent technological innovations that make this more practical. We can, for instance, place the trap on a floating raft, which limits the other kinds of creatures that would accidentally trigger it, especially if we make sure that the trap is too small to hold an otter. Secondly, it is now possible to get the trap to automatically send an email or text message whenever it's triggered, ensuring that somebody can get there as quickly as possible, release anything that shouldn't be there, and avoid prolonging the experience for anything that should be.

The real problem here is making sure that you've caught all of them. That's hard enough at the best of times, but especially so over an area the size of Britain. The more you catch, the harder it is to catch the ones that are left. The use of molecular identification techniques to find mink DNA in the water may help to figure out where the last ones are hiding, but it's still not going to be easy.

It would clearly be preferable if we could get rid of the mink without having to kill them. But this is, unfortunately, a lot easier said than done. There was some hope in the early 2000s that the recent resurgence of otter numbers in the UK would be helpful here, with the larger animals driving the mink out naturally. More recent evidence, however, suggests that, if this is happening at all, it's at levels too low to be reliably confirmed. 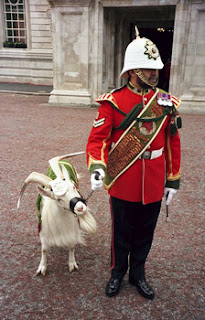 In the case of the mink, that probably doesn't leave us with much of a choice: it's them or the voles. For at least some other animals, however, there may be alternatives.

A feral population of Kashmiri goats lives on the rocky peninsula of Great Orme just north of Llandudno in Wales. Goats can be damaging to the environment if left to breed uncontrollably, so the local authority wants to control their numbers. On the other hand, they don't want to get rid of all of them, not least because they help to bring in tourist money. (Indeed, the Royal Welsh regiment recruits one to serve as a mascot and promotes it to the honorary rank of Lance-Corporal).

The solution has been to vaccinate some of the females with a treatment that renders them infertile, and a recent review of the population, and the number of kids born each year, shows that it is working. Which is good news for the habitat, and also for the goats, who don't risk running out of food.

Clearly, that's unlikely to work for highly populous, fast-breeding, small mammals running wild across a large area. But in some cases, it's a more humane, and equally effective alternative to culling and has to be at least worth a try.

[Photos by Peter Trimming and Greg O'Beirne, from Wikimedia Commons.]
Posted by JK Revell at 17:14