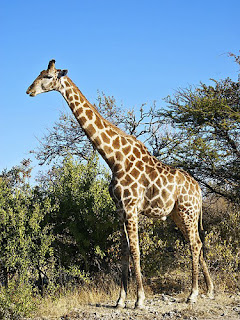 Last week, I described how, over the last few decades, populations of gray seals have recovered from a near-total local extinction in US waters. Clearly, other species facing similar threats, across the world, have not been so lucky. The rapid pace of human expansion simply overwhelms the ability of some species to cope, whether it be through direct effects (expansion of agriculture, cities, transport networks, and so on) or indirect ones (climate change, most obviously).

In the millions of years before humans appeared on the scene the world was changing at a slow enough pace that it was possible for mammal species to evolve their way out of a problem. Many didn't, of course, and went extinct, but others gave rise to newer species that outlived them. Today, it's not just the scale of the changes humans are making that has caused problems for some species, but also their speed.

When it comes to dealing with very rapid changes in the environment - whether human-caused or otherwise - mammals have both advantages and disadvantages compared to some other species. On the negative front, mammals, especially the larger ones, have long generation times, meaning that any effect of evolution, even on a relatively minor scale, is inevitably going to be slow.

On the plus side, mammals tend to be intelligent.

Of course, this is a relative statement, and one that could apply equally well to birds, among other animals. But one of the key concepts here is behavioural plasticity - the ability of an animal to change the way it behaves in response to changes in its surroundings. The advantages of this are fairly obvious, but there are a number of disadvantages too, which is why whether it's present, and, if so, to what extent, varies between species - especially when we are comparing say, insects to mammals.

Perhaps the most apparent one is that it does require a large and complex brain, which is energetically costly to maintain and tends to require a large animal with a proportionately long time spent in infancy. Score one for the mammals over the insects on that one, and note that behavioural plasticity may be more inherently useful if you have a long generation time anyway. It's also been argued that the ability of a species to resolve its difficulties by modifying its behaviour may mean that it has less need to evolve further through natural selection - which could be a problem if the issue involved is one that's so drastic that behaviour just won't cut it.

What this means is that, to find mammals that are likely to have a particular ability to modify their behaviour in response to local or temporary circumstances, we should look to physically large, long-lived animals. Clearly, there are many examples that fit this bill, from elephants to monkeys - many of which are, indeed, being overwhelmed by thee sheer magnitude of the threats they face. One that might not be the first you'd otherwise think of is the giraffe (Giraffus camelopardalis)

Any discussion of giraffes (at least on this blog) has to start with the question of how many living species of the animal there are. The scientific name I've given above is the standard one that's been in use since the 18th century; for a long time it was used to describe all living giraffes. For the last twenty years or so, however, there has been considerable debate as to whether giraffes across Africa really do all represent a single species, or whether some populations are distinct... and, if so, how many.

This debate briefly made the headlines in 2016, after a genetic study demonstrated that four populations had been distinct for so long that they surely ought to be considered separate species from one another. That didn't end the debate however, not least because it's hard to decide exactly what criteria for delineating species are the best ones to use. A study published just three months ago came up with an answer of "three species", but we can't yet say that it's going to be any more of a "final answer" than the previous ones.

One of the methods used to measure behavioural plasticity in large herbivores is to determine the extent to which they can modify the size and structure of their herds in response to varying conditions. This makes sense for giraffes since, not only are they herd animals, but they don't remain within the same herd for their entire lives, but quite often move between different herds that are connected by complex, larger-scale, social structures. Surprisingly, the size of herds within these larger groupings have been shown not to be directly affected by the presence of predators, leaving habitat changes as one of the more plausible alternatives.

The giraffes of northern Namibia live in an arid desert environment, where most of the water - and hence also edible vegetation - is found around rivers that regularly dry up. The unpredictability of this particular habitat makes it exactly the sort of place where we'd expect giraffes to change how they act if, indeed, they are capable of doing so, assuming that we can rule out other reasons for the change in herd size that are beyond the animals' control.

The giraffes in question belong to the Angolan subspecies, one of the rarer and more threatened populations, and which is not often seen in zoos. Schemes that consider there to be multiple species typically consider it to be a type of southern giraffe (Giraffa giraffa), although a few go as far as to consider it a species in its own right. But it seems likely that other giraffes are at least similar.

The results of two years worth of watching giraffe herds in the area were recently published, seeing how they differed as conditions changed. Perhaps the most significant factor that affected herd size was whether or not it contained individuals of both sexes. That's likely to be a fixed factor, with individuals staying in single-sex groups much of the time, but coming together to mate. On the other hand, as with previous studies, the presence of predators made no difference to the giraffes; for instance, they don't gang up in larger groups if they have young to protect, presumably indicating that other factors are more important in limiting their size.

The time of year also had little effect, bearing in mind that this is an area with a distinct rainy season in summer. However, the herds did become larger the more vegetation there was to eat. Essentially, they were larger closer to the few seasonal rivers, and more so by the valley that supported the most plantlife. Since the giraffes regularly move between rivers, and can still be found in the more desert-like highlands between the valleys, this suggests that they are deliberately splitting their herds into smaller units as food supplies become less reliable, and reforming them again once they find somewhere more amenable.

Despite being one of the rarer subspecies in terms of raw population numbers, southern giraffes do, currently, appear to be increasing in numbers, but the same is not true for most of their counterparts elsewhere. The ability to change their behaviour in response to the availability of food may stand them in good stead as the climate changes, but there will inevitably be limits as to how much that can help them if things change too much.

Fortunately, while they are sometimes hunted, it's nothing like to the extent that, say, rhinoceroses are, so conservation is likely to be less of a struggle. But understanding how they behave, particularly in terms of how multiple smaller herds are actually part of larger social groupings that split and merge as the need arises, can still be helpful in preserving one of the less studied large mammal species of Africa.