As of this writing, the Mammal Diversity Database, probably the most authoritative and up-to-date list of officially recognised mammal species, lists 127 living species in the opossum family. 126 of these live in South America, where they form a whopping 10% of all known land-based mammal species. This leaves the familiar Virginia opossum (often known simply as a "possum" in the US) as something of an outlier. Indeed, it's just a lone species whose ancestors moved north from South America when the two continents collided around the end of the Pliocene and then spread widely due to their adaptability and the lack of anything too much like them already there.

As one might imagine, given how many species there are, opossums of various kinds are found across the South American continent, in a wide range of different habitats from dense tropical jungle to mountains and grassy plains. Compared with the wide-ranging Virginia opossum, many of the southern species are picky about they live, and they have had a long to adapt to wherever that might be. Clearly, opossums originated somewhere on the continent and later spread out to new areas, but can we discover how and when that happened?

Perhaps one place we can start is by looking at what subgroups we can identify within the opossum family. Here, genetic evidence happens to mirror fairly well what we would already have guessed from simply looking at the living species. The opossums, it turns out, can be divided into four main groups. Unfortunately, because so many of the individual species are relatively obscure to non-specialists, there are no good common names that we can apply to these groups, leaving us with the technical ones.

First, there are the didelphins, the group that includes the Virginia opossum and its closest relatives, including the common opossum (Didelphis marsupialis), which is similarly widespread, being found from Bolivia to central Mexico, along with some semi-aquatic opossums such as the yapok (Chironectes minimus) the only marsupial species where the male has a pouch as well as the female (apparently, he tucks his scrotum into it when swimming, possibly to protect it).

The oldest fossils of this group date back nearly 7 million years and were found in Argentina but molecular estimates suggest that the yapok diverged from other didelphins as early as 10 million years ago, with the Virginia opposum diverging from the ancestors of the "common" sort around 6 or 7 million years ago, probably in or around Venezuela. This, however, would make it by far the youngest of the four main subgroups. 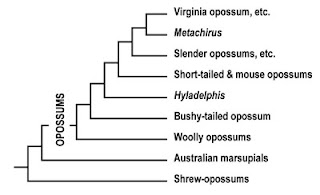 The second group are the thylamins, a group that contains the slender, gracile, and fat-tailed opossums, among a few others. Although the oldest fossils are of about the same age, molecular estimates show this to be a much older group than the didelphins, dating back perhaps 25 million years to the Late Oligocene. They probably arose in areas with dense tree cover, and many of them live in the Amazonian region today. Others, however, do not, being found in the heights of the Andes and, in one case, the treeless steppes of Patagonia. It seems that may have entered the latter area in the Late Miocene, only colonising the Andes later; those that remained in the lowlands became divided into new species when they were separated by wide rivers, but once in the mountains, the advance and retreat of glaciers during the Ice Ages and interglacials became more significant.

Next are the marmosins, including the short-tailed opossums and most (but not all) of the small species referred to collectively as "mouse opossums". This is the group that includes the oldest definitive opossum fossils, dating back over 13 million years to the Middle Miocene of eastern Peru. The molecular evidence pushes the origin of the group much further back, with the short-tailed opossums splitting off from the others during the Oligocene. This again suggests an origin in tropical lowland forests, with the animals moving north (one species is found as far as Mexico today) and south much later, around the dawn of the Pliocene, 5 million years ago.

Together, these three groups, along with a single genus that doesn't quite fall into any of them, form the main subfamily of opossums, containing the great majority of living species. The remaining six species include the fourth major group, the woolly opossums of central South America, and two Amazonian species that are distinct enough to be given their own subfamilies. These have little, if any, fossil record, although the molecular data suggests that their lineage must be the oldest; they perhaps were uncommon, or didn't live in locations where the conditions were good for forming fossils. (Having said which, the oldest known possible opossum fossil may belong to this group, but it's sufficiently incomplete that not everyone agrees it even is an opossum).

While some other studies have arrived at a later date, a 2021 review of this evidence concluded that the first opossums appeared in the area now occupied by the Amazon rainforest around 38 million years ago, well before the oldest fossils we currently have. (Not least, one assumes, because there aren't any good fossil sites of the right age in that part of the continent). Furthermore, analysis of the ages of fossils from the various groups and where they were found suggests that three of the four main groups, and all of the three minor branches originated in the same area; only the didelphins may be an exception, with some evidence that they may have originated north of the Amazon in present-day Venezuela or western Colombia.

If so, opossums basically didn't leave their original home region for something like 30 million years, spreading out across the continent only from the Late Miocene onwards. Since the Amazon was already a tropical forest at the time of their origin, this fits with suggestions from other evidence that the first opossum may have been a small animal, about the size of a modern house mouse and was probably adapted to living in trees in a hot climate. Similarly, the fact that so many of the branches within the family appeared in the Late Oligocene to Early Miocene likely reflects the fact that the Andes were rising at this time, creating a rainshadow that brought about changes in the extent and composition of the forest, forcing animals to adapt or die out.

Then, around 12 to 10 million years ago, the opossums underwent a second burst of diversification as they finally headed out of Amazonia to other parts of the continent. This, too, lines up with some major climatic and geographic changes. The world was starting to cool, which not only changed the weather, but also caused the sea levels to drop, changing the coastline - prior to this, much of the Amazon Basin was likely an inland sea, draining through a narrow strait into the Atlantic much as the Black Sea does to the Mediterranean today. The northern section of the Andes was also undergoing a particularly rapid burst of growth and it may be notable that the first expansion of opossums out of Amazonia occurred in this region, into Venezuela and Colombia.

Around 7 million years ago we see the rise of the Central Brazilian Plateau, which may have helped separate today's Amazon rainforest from the Atlantic Forest further south. The fact that there are already fossils of thylamin opossums from Argentina at this time indicates that they already spread a long way south, where they would eventually have to adapt to colder, relatively barren terrain as the world continued to cool. Towards the end of the Miocene, 5 million years ago, we see the origin of new species in both the Atlantic Forest and the cerrado belt of open woodland that now occupies the Plateau.

From that time on, South America had broadly reached its current form although, naturally, it continued to be affected by the continued cooling that culminated in the Ice Ages. All the major groups of opossum had already come into being by this point, but there would have been much fine tuning of individual species leading to the over 100 species of the animal that we have today. A little over two million years ago, the Panama land bridge opened, allowing some of the tropical species to head further north, into Central America, and Mexico beyond.

One went further still, and today, extends north of the Canadian border.