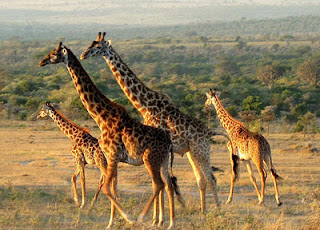 Giraffes are cloven-footed ruminants, with the same hoof structure and four-chambered stomach found in deer and antelopes (among others). Indeed, there are many other similarities, and giraffes are clearly part of the same general evolutionary group - technically called the 'Pecora' - rather than some case of parallel evolution. Exactly how they are related to the other pecorans has, however, been a matter of some debate. For a long time, they were assumed to be related to deer, partly on the grounds that the bony projections on their heads resemble antlers more than they do the true horns of the bovids.

Modern genetic analysis, however, shows that giraffes are most closely related to the pronghorns of North America, a group distinct from the true antelopes and of which only one species survives today. But they are hardly close relations, even then, probably having diverged from the pronghorns around 20 million years ago, during the Early Miocene. This is about the same time that the deer diverged from the ancestors of the bovids and long before, say, the ancestors of goats diverged from those of gazelles. This places giraffes as about as distinct from the other true ruminants as it's possible to get so differences in such things as behaviour would hardly be surprising, even ignoring their obvious physical attributes.

That issue is pretty much resolved now, but a second one focuses on just how many species of giraffe there actually are. The first point to note here is that the giraffe family, as it exists today, indisputably contains at least two species. We can say that because it doesn't just include the giraffe itself, but also the okapi, a smaller (comparatively speaking) and short-necked animal that nonetheless visibly has a giraffe-like head. Ignoring that, though, most textbooks and, as it currently stands, the International Union for the Conservation of Nature, recognise only one species of 'true' giraffe.

This is probably wrong. Evidence that there is enough variation - and lack of interbreeding - between the nine supposed subspecies to raise at least some of them to full species status has been around for a while. How many species that should be is where the controversy arrives, with opinions ranging from two to at least six. A study of giraffe genomes published last May, however, supports a growing consensus from other recent studies that there are probably four, and this is the number recognised, for example, by the American Society of Mammalogists, who maintain one of the most authoritative lists of such things. But the debate is not necessarily over.

But, glossing over all that, it remains the case that when we look at giraffes as a whole they seem to lack the complex social lives we'd expect of herd animals. A study conducted in Kenya in the 1970s, for instance, showed that the average size of a giraffe group is just four animals, with many living solitary lives, and few, if any, consistent social bonds among adults - even those groups of four are not always the same four animals from day to day.

This has often been put down to the fact that, because of their huge size, giraffes need to spend more time feeding than other ruminants, leaving little left over for socialisation. Typically, they spend around 13 hours each day just feeding and they even walk about looking for more food while chewing the cud, something no other ruminant does.

So, while female giraffes in particular are not usually on their own, they don't seem to have any preferred friends or familial loyalty once their calves have grown up and they just associate with one another randomly. They don't really have what we could describe as a social life.

Except... no, actually, that's not true.

It's certainly what we thought throughout the 20th century but, starting in 2000, we began to get hints that there was rather more going on than we'd suspected. Stable groups do form, and giraffes in zoos do suffer separation anxiety if you remove a long-term partner. In the twenty years since, in part due to improvements in the use of digital cameras to monitor wild populations and statistical software to assess observed associations, it has become clear that, even if they don't live in large herds, giraffes do have more complex social lives than we'd previously given them credit for.

So, in the twenty or so years since we've realised that there might actually be something to look at, what have we learned?

For a start, adult female giraffes do have particular individuals that they are more likely to associate with. These are often their own kin, especially adult daughters, although there are exceptions. Either way, even when two females regularly forage in the same area and often come across one another, they don't necessarily pair up when they do so; they clearly have preferred foraging partners.

The result is what's described as a "fission-fusion" society, something commonly seen in primates, as well as lions, elephants, and dolphins. That is, membership of a specific travelling group may well change in the short term, with individuals coming and going, the group breaking up and then reforming later, and so on.

Indeed, there may be as many as three levels of such association, with individual cliques grouped into subcommunities within larger communities. Individuals may not stay in the individual cliques for long, but they remain a part of the larger community. These groups are based on lines of matrilineal kinship, passed down from mother to daughter, and there is a clear dominance hierarchy among adult females with the more dominant individuals keeping their status for years at a time, at least in captivity. There is even some evidence that, as in elephants, post-menopausal females remain active for years after they stop being able to breed, perhaps providing the benefit of their experience in finding food and water sources or of rearing young to their reproductive kin - a "grandmother" benefit that is rare among nonhuman mammals.

Males are a different matter. As with many mammals, male giraffes leave home as soon as they are able to, in order to ensure that they won't end up breeding with their own female relatives. Familial associations cannot be maintained under such circumstances, since that's largely the point. Thus male giraffes often are on their own, although they may compete for dominance when they are ready to breed. The rest of the time, they don't hang out with the females, although some younger males may follow older bulls around, possibly so that they can learn by observing them.

An unusual feature of giraffe social behaviour is that they form creches in which a number of calves from different mothers are reared together. Female calves reared together in this way are more likely to associate with another when they grow up, evidently having formed bonds of attachment even if they are not biologically related. It's easy to see how such shared effort in rearing young can reap benefits for the mothers, despite this being an uncommon behaviour among mammal species - it's perhaps most frequently seen in primates.

In giraffes, it even extends to mothers sometimes knowingly nursing young that are not their own, or infertile females helping to care for calves when they have none of their own. Some have shown signs of distress when a different mother's calf has died, suggesting some degree of attachment - albeit there is probably at least some kinship involved, given the matrilineal nature of their society.

Given all this hidden complexity and probable cooperation in giraffe communities, we would reasonably expect that they must have fairly sophisticated means of communication. Giraffes, however, are not well known for being particularly vocal animals and the little information we have on their detailed behaviour comes almost entirely from zoos, which may not reflect their behaviour in the wild. So exactly how they communicate remains unclear.

Nor do we know exactly how behaviour and sociality may vary between the different species of giraffe since, until recently, they were all thought to be one.  Most studies have been done on the East African species or subspecies, and the fewest on the North African one(s) so there could well be variation there that we don't know about, especially if studies have been performed in zoos where the exact origin of the captive giraffes might not be known with certainty.

But, while giraffes may not dwell in large herds as some other hoofed mammals do, they do seem to be more sociable, cooperative, and probably intelligent, than we thought a quarter of a century ago.