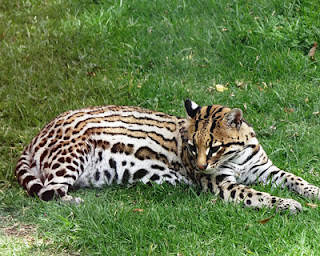 There are a number of different species of cat living in South America, including some that are not widely known by the general public. Across much of the continent, however, the most abundant are often the ocelots (Leopardus pardalis), outnumbering both the larger cats that require substantial food resources and the smaller, more localised ones. Aside from the desert regions west of the Andes, ocelots live across almost the whole of the continent from northern Argentina to the Caribbean coast and their population is large enough that they are not generally considered a threatened species.

But that broader picture, which is generally positive for the species, hides some local variation. They are not, for example, especially common in the Caatinga, the area of dry scrubland that covers the easternmost regions of Brazil. More significantly, perhaps, they also become less progressively common once you leave South America and head north. Ocelots are found throughout Central America, and along both coastal regions of Mexico, and they are even found in small numbers in southern Texas and Arizona. In both of these latter countries, however, their populations are low enough that they are listed as endangered species by the local authorities responsible for such matters - the US Fish and Wildlife Service and the Secretariat of Environment and Natural Resources.

These lower numbers are due, in large part, to the environment being less suitable for them. Ocelots prefer dense forest vegetation of the sort that, in turn, requires plentiful rainfall. This is not a good description of much of Mexico, and still less of Arizona... or, for that matter, of the Caatinga. Left to their own devices, this probably wouldn't be too serious for the ocelots, or they wouldn't live there in the first place but, naturally, other threats do exist. Hunting ocelots for their pelts may be banned under international conventions, but it still happens and mortality due to road collisions is not insignificant.

Those directly man-made threats aside, the principal issues for ocelot survival at the northern end of their range are the loss of their natural habitat and of their genetic diversity as populations become more fragmented. Which are, of course, not unrelated. In the US, ocelot populations are so small and marginal that they may well not survive the next few decades but in Mexico the local populations seem more stable. Nonetheless, it is still marginal for them, and understanding how they use the habitat that remains can be important for regional conservation efforts. Furthermore, it may be easier to perform population studies on them than on rarer cats such as jaguars that may otherwise face similar pressures.

The Sierra Tamaulipas is an isolated mountain range in the northeast of Mexico, near the northern edge of the ocelot's range in the eastern part of that country - the smaller population further north in Texas may be a tiny remnant of the same group that has become isolated from it over recent years. The rugged nature of the terrain has kept it comparatively free from human interference and since 2016, it has been a nature reserve. It wouldn't be accurate to say that it's entirely uninhabited, but it's not far off, and certainly has less agricultural land than one would find in the lowlands immediately to the east, closer to the coast.

A recently published survey of the ocelots in part of the range north of the Rio Soto La Marina looked in particular at how the animals made use of the landscape. The study area is part of the "Tamaulipan mezquital" ecoregion, dominated by relatively dry scrubland, with mesquite and Texas sage in the valleys and more wooded areas with ebony and jopoy on the higher slopes. This is not ideal landscape for ocelots, but it does include enough cover for them to hunt from, concealing themselves in scrubby bushes or undergrowth, and pouncing out to take down their target.

The population survey used camera traps placed along game trails, the few backroads in the area, and near sources of water. Over the course of just over six months, the cameras snapped pictures of ocelots on over 140 occasions. Fortunately, the precise pattern of spotting on an ocelot's coat makes it possible to identify individuals and this process can be assisted by pattern-recognition software, picking out potential candidates and forwarding them to humans for confirmation.

On this basis, the study identified 34 different ocelots living in the area, which is relatively high, considering its area of 125 km² (48 square miles). Since the actual camera trapping was conducted back in 2009, before the creation of the nature reserve, there seems good reason to suppose that this remains the case today, since pressure is unlikely to have increased in the intervening decade and, if anything, may have gone down.

As to how the ocelots used the landscape, the study revealed the usual pattern that males wandered further afield than females, using much more of the land than the females did (and therefore being snapped by cameras in widely separated locations). This is typical in mammals, with males occupying larger areas because it gives them more opportunities for mating and females sticking to well-known locales to raise their young.

The ocelots were also more common on the higher slopes, where the scrubland gave way to forest with substantial canopy cover, which likely benefits their ambush-based hunting style. It was also apparent that they tended to avoid the edges of vegetated areas, such as where roads or natural patches of grassland abutted or crossed through the scrub. This supports earlier findings from South America confirming that ocelots prefer to stay deep inside forests rather than running the risk of becoming more visible at the margins - which, for many animals is a preferred habitat, because it gives more variety of prey or vegetation.

All of this implies a healthy population, perhaps more so than might have been expected, and makes it clear that ocelots can thrive even in habitats that, at first glance, are less than ideal for them, so long as sufficient protection remains in place and agriculture doesn't encroach too far. Similarly good news came from Costa Rica recently, where it turned out that the local ocelots are genetically diverse and are not divided into isolated populations by natural or artificial barriers, being able to mix freely across the whole of the country.

That may be less true in Mexico, at the northern edge of the species' range but the ocelots there seem to be doing well enough. They are clearly adaptable animals, able to survive in a wide range of different habitats, so long as they provide cover and they are doing rather better than more specialist and demanding cats, such as jaguars. While we shouldn't be complacent, at least some species can prosper without having to live directly alongside humans to do so.

[Photo by "Petruss", from Wikimedia Commons.]