When I'm describing a particular species of mammal on this blog, one of the first things I usually mention is where in the world it lives wild. Clearly, there are differences in the fauna of different continents or specific islands. Cougars, black bears, pronghorn antelope, and coyotes are all common enough in the US, but don't live in Europe. We have Eurasian and Iberian lynx, but not bobcats and Canada lynx. There are bison in Europe, but they're a different species than the American sort, and we only have wild raccoons because some were deliberately released in Germany in 1934.

Clearly, the existence of the Atlantic Ocean is not to be sniffed at. However, this applies on a smaller scale, too, where some physical barrier that's some way short of an ocean, but is still significant, prevents an animal from advancing further across its home continent than it might like.

And then there's the fact that animals have particular requirements as to the climate and vegetation of their native areas - even if the vegetation is only affecting the prey animals that they themselves need to feed on. The difference between this and the physical geography of rivers, mountains, and so on, is that it's changing over a much faster timescale, especially in recent decades. Animals may be forced to move to new areas, which can be a problem if the physical geography prevents them from doing so and can be a problem for other reasons even if it doesn't.

While it may not receive quite the attention of cougars and grizzlies, the white-footed mouse (Peromyscus leucopus) is one of the most common mammals in North America, and important as a major reservoir of Lyme disease. It's not even remotely endangered, being found in relatively high numbers just about everywhere. It's also clearly highly adaptable, as can be seen by the fact that it lives across most of the continent from southern Mexico to Canada, be it the dense forests of the wilder parts of the eastern US, or the deserts of New Mexico.

But, even so, it does have boundaries. For some reason, it isn't found in Florida, nor in the coastal plains of the neighbouring states. The mountains of the west also provide a more obvious barrier, so that while it would presumably be perfectly happy in Oregon or Washington, it isn't found there - its westernmost extent forms an irregular line running through Arizona, Colorado, Wyoming, and Montana, with the Sierra Madre similarly restricting it to the east of Mexico. 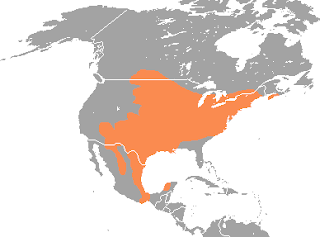 Naturally, there's a northern boundary too. While it is, indeed, found in Canada, it isn't by much; the weather evidently gets too cold once it gets much beyond Montreal in the east or Regina in the west. It may be adaptable, but there are limits, and a Canadian winter is clearly one of them. I'm getting this information from the International Union for the Conservation of Nature, but the distribution map that they use is also the basis of the copyright-free version on Wikipedia, which you can see to the right.

But here's the thing; it's not entirely accurate. The reason for that is climate change. As the weather has warmed, the mouse has moved into more northerly territory than it would previously have tolerated. One region in which we can see this effect is the Great Lakes - which have the advantage of forming something of a physical barrier as well as a climatic one.

If you look at the map, what you will see is that Lakes Michigan and Huron form the northern boundary of the mouse's extension in this part of the world. They are found throughout almost the entire Lower Peninsula of Michigan, to the east around Toronto and to the west in Wisconsin. But they are not found in the Upper Peninsula, lying between Lakes Michigan and Superior (or in northern Minnesota).

In fact, if you were able to zoom in closer, you'd be able to see that isn't quite true. It's more obvious on the larger original map, but the range does include the very southernmost bit of Michigan along Green Bay - basically the southern half of Menominee County. It was first seen there in 1939, apparently having been entirely absent from the area prior to that time.

But we can tell, from examining museum specimens captured across the area that, while the map may not yet have been updated to account for it, the mice have continued their northern advance since then. They were first encountered north of Menominee County in 1981, and, by 2004, they were found right at the eastern tip of the Upper Peninsula, just across the border from Canada.

The obvious interpretation of this is that white-footed mice from Wisconsin moved into the Upper Peninsula of Michigan during the 20th century and steadily moved eastward until they ran out of land. But this might not necessarily be the case, since the eastern tip of the Upper Peninsula is just over 5 km (3½ miles) from the northern tip of the Lower Peninsula across the Mackinac Strait. Which, moreover, has been crossed by a bridge since 1957, allowing for the possibility of accidental human-mediated transfer of the animals between the two landforms.

It might be useful to know which of these two possibilities is the case since it could have consequences for the genetic diversity of the mice on the Upper Peninsula and thus how able they might be to respond to further climatic changes or to spread further, such as across the much narrower St. Mary's River into Canada. To find out, however, we would need to analyse the genetic structure of the white-footed mouse's population across the state.

Researchers did this by taking samples from museum specimens collected at different sites, grinding up tiny bones from inside their noses and analysing over 7,000 different genetic loci to build up a detailed picture of their respective genomes.

The first thing that this revealed is that the more complicated picture appears to be the correct one. The white-footed mice captured in recent years from the eastern reaches of the Upper Peninsula are more genetically similar to those taken from the Lower Peninsula than they are to those found closer to Wisconsin. So there are two different colonisation events, one from the west, and one from the south, across the Strait. From the mouse's perspective, this is a good thing because it suggests higher genetic diversity than one might expect... although humans who could catch Lyme disease from it might take a different view.

However, there is more to this, because it was also possible, by assessing how distinct the genetic populations were, to provide an estimate of when they last shared a common ancestor. In other words, how long ago did this split happen?

According to this study, the white-footed mice in the Lower Peninsula of Michigan last shared a common ancestor with those in northern Wisconsin about 91,000 years ago - much further back than previously thought. This is significant because Lake Michigan has only existed for about 14,000 years. The most likely explanation for that is that the region was itself colonised in two separate events as the ice sheets retreated and created the lake, with the ultimate divergence much further back in time and presumably also further to the south.

That's interesting and has some implications for genetic diversity, with two long-separated populations coming back into contact again, but it's perhaps not overly surprising. What's more of a puzzle is that the two most closely related populations - those from the Lower Peninsula and those from the eastern part of the Upper - apparently separated 4,800 years ago. Which is around the time that the Mackinac Strait formed, and not... well, when the bridge was built.

Were the mice hiding out at the eastern end of the Upper Peninsula all this time without anybody noticing? It's one possible explanation, although it does seem a bit unlikely. But it's worth noting that the researchers only sampled one location in the Lower Peninsula, and it's possible that there's a more complex genetic structure of the white-footed mouse population in that part of Michigan than we'd think. That is, the mice now living in the eastern part of the Upper Peninsula got there from a different region of the Lower Peninsula than the one which was sampled.

In that regard, I note that a map of the evolution of the Great Lakes produced by the US Army Corps of Engineers, and widely copied online, shows that when the Strait of Mackinac formed, there was also a second strait, further south, cutting off the northernmost part of the Lower Peninsula as an island. A population could have been isolated on that island, and, if it didn't merge too much with that to the south when the island rejoined the mainland then the mice that recently colonised the Upper Peninsula might be descended from them, not from those elsewhere in the state.

Now, I'll freely concede that it's not obvious why the two populations wouldn't re-merge after the more southerly strait closed. But, if there is a complex population structure in the Lower Peninsula, it has to have come from somewhere. It may well be that other possibilities are equally - or perhaps more - plausible. But, whatever the reason, while white-footed mice may have only reached the more northerly parts of the state in recent decades, the history of their migration across Michigan is more complex than we might think, dating right way back into the time of the Ice Ages...

[Photo by D.G.E. Robertson, map by "Izvora". Both from Wikimedia Commons.]