Bats in the Megafire 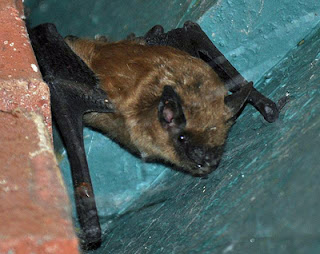 A little over ten years ago, I wrote on this blog about the effect of forest fires on bats in Florida. It turned out that the bats in question, which were big brown bats (Eptesicus fuscus), one of the most common bat species in the US, were actually quite happy when forest fires tore through the sandhills where they lived. This is because it improved their environment, in particular making it easier to fly about through what might otherwise be a mass of tangled vegetation and thick undergrowth.

That was a decade ago, and further studies since that date have broadly confirmed the findings of the one I was referring to in that post. A 2019 study, for example, showed that the same was true for a number of species in Australia. Overall, it seems that, at worst, forest fires have no overall effect on bat populations and, in general, they're actually a benefit.

But there is a rather large caveat to this. The forest fires we're talking about are carefully managed and low-intensity. They're small scale, localised, and not really all that different from the fires that have always occurred in forests every now and then due to lightning strikes and the like. What we're not necessarily talking about are "megafires".

The term "megafire" is, as one might imagine, loosely defined. Generally speaking though, we are talking about fires affecting an area of over 10,000 hectares (39 square miles) and that cause substantial damage to the forest understory killing off a significant proportion of even the larger trees. These have been increasing in frequency over the last few decades and have widely been reported on from the US, southern Europe, and Australia.

If the primary reason that bats benefit from managed wildfires is that these reduce the density of the undergrowth and given that being able to fly makes it a lot easier to avoid being incinerated in the catastrophe itself, we would expect that bats should like megafires even more than smaller-scale ones.  But such fires also have significant effects on the other wildlife in what may be an extensive area. The effect on, say, squirrels, may not concern the bats much, but if the insects that they eat are killed off, that may be a different matter.

This is a difficult thing to tease apart, especially since we won't know in advance when a major fire is coming, making it hard to do straightforward before-and-after studies. But it is is possible to take a look at areas of forest that have been affected by a recent fire and compare them with similar areas nearby that were not. A recently published study used this approach to monitor bats in the aftermath of a megafire in California.

The King Fire started on 13th September 2014, and was not completely extinguished until 10th October. 2014 was a particularly bad year for wildfires in California, following a year of drought that left forests vulnerable and, while the King Fire wasn't the largest of that year, in either terms of area affected or damage to housing caused, it came close on both counts. Later shown to have been caused by an arsonist, it burned 39,500 hectares (150 square miles) of forest and destroyed 80 buildings, requiring nearly 3,000 people to be evacuated from the area. About half of the area was affected by "highs severity" burn, meaning that over 75% of the trees were destroyed - the sort of thing you would not expect in a controlled fire.

The fire took place in El Dorado County, which lies in the Sierra Nevada Mountains along part of the Nevada state border east of San Francisco. Much of the country is occupied by the National Forest of the same name and includes significant amounts of woodland. The King Fire took place within what's described as the "lower montane" band of forest, which extends from roughly 900 to 2,100 metres (3,000 to 7,000 feet) and is dominated by conifers such as pine, fir, and cedar. Although it can get very cold in winter, it can reach 37°C (100°F) in summer and, this being California, rainfall isn't exactly plentiful.

Forest fires in the region aren't a new phenomenon. Such fires apparently occurred every couple of decades or so even before the arrival of Europeans. These were generally small scale but led to the natural forest having a mix of habitats and a resultingly complex and healthy ecosystem. During the 20th century, however, a mixture of logging and (ironically) fire suppression made the forest much more even in composition making fires more dangerous. With a warming climate, fires have become much more common, and more devastating, in the region since the 1970s, creating a risk that parts of the forest will be destroyed altogether and replaced by open scrubland.

The forest is home to seventeen different species of bat, with the most common being the California myotis (Myotis californicus). In 2017, researchers conducted a survey of the bats in the area, looking at areas of neighbouring forest outside the reach of the 2014 fire and comparing with others on the periphery or deep inside some of the worst affected stretches. The survey was conducted by placing acoustic monitoring devices at key locations overnight and counting the ultrasonic echolocation calls it picked up and analysing them with specialist software to determine the likely species making the call.

As it turned out, the long-term effects on the bat population even in the worst-hit areas of the forest were much less than one might expect. This isn't to say that they were non-existent; the California myotis, the most common bat in the area, was less frequently found in the most badly burned parts of the forest, but even so, it was found there, although its harder to say whether the bats were visiting from roosts elsewhere or had successfully managed to recolonise.

Since the California myotis is one of those species that likes flying in areas with relatively heavy undergrowth and low-lying tree branches, due to its high agility in the air, this isn't all that surprising, and local species that like more open environments, such as the Mexian free-tailed bat (Tadarida brasiliensis) being less affected. There, however, they were less common anywhere that the tree canopy was heavy regardless of whether that was due to the fire or not, so even then, there probably wasn't much long-term effect other perhaps than a change of where they went looking for food.

In fact, food, seems to be the main reason why the bats were able to bounce back so quickly from the disaster, in a way that other local animals might have found more difficult. The primary prey for the majority of bat species in the area would normally be moths, and moths are just as capable of fleeing a conflagration as bats are. Overall, the moths do seem to have taken a hit, with fewer moths belonging to fewer species, in the parts of the forest that had been burnt. But some particular species, including specific tortrix and geometer moths had apparently benefited from the fire, probably because their caterpillars like to feed on California lilacs, a shrubby plant that rapidly colonises areas where trees die back. This may indicate that the bats don't care which species of moth they happen to be eating, so long as there's plenty of them.

So this shows, once again that bats are resilient when it comes even to the largest of fires. Of course, this study was conducted three years after the fire, giving time for at least some of the vegetation to die back, even though it would take at least 30 years, and possibly quite a bit longer, for it to return to its original state. More immediate effects are likely more extreme, and its hard to imagine that the destruction of so many roosting sites didn't have at least a short-term impact, even if the bats later recovered. And, if such fires continue regularly and the forest gives way entirely to scrubland, at the very least there would be significant changes in the mix of bat species in the area - California myotises feed mainly in the tree canopy, so if there is no canopy left, they'll obviously go elsewhere if they can.

But the message is, that if things don't get that far, bats can bounce back even from unusually large and intense fires. It may take a few years, and there may be some medium-term shifts in the local ecology as a result, but the ability to fly does give bats an advantage that other mammal species do not and they can recover. Megafires are obviously bad news, including for any humans living in the area, but at least some parts of nature can heal given time.

Which is probably just as well, since in August last year, the same area was swept by an even larger and longer-lasting conflagration, currently ranked in the top twenty in California's history. And there comes a point where you have to wonder just how much more it can take...

[Photo by "the high fin sperm whale", from Wikimedia Commons.]